Pettersson apparently plays at his best when he's more active on social media.

On Tuesday night, Elias Pettersson scored a fantastic goal against the Edmonton Oilers, with the type of solo effort that Vancouver Canucks fans haven’t seen all season.

It wasn’t just the shot — a sizzling laser beam that ripped past goaltender Mikko Koskinen’s shoulder into the top corner of the net — but everything that led up to it. He made a great defensive play in the neutral zone to steal the puck, then slalomed through the Oilers skaters with casual ease.

Up until that point, nothing has looked easy for Pettersson this season.

Despite the goal and five points in his last five games, it still doesn’t quite feel right to say that Pettersson is back. He’s struggled too much this season to be confident that he’s turned the corner. At his best in previous seasons, Pettersson wasn’t just potting a point here or there but taking over entire games with his dogged puck pursuit and magical hands.

That Pettersson — the one that seemed to delight in making opponents look foolish with his ridiculous dekes — hasn’t appeared much this season. Instead, he’s sometimes seemed hesitant with the puck, second-guessing himself and double-clutching.

Why has Pettersson struggled this season?

There have been numerous potential explanations for why Pettersson has struggled. For instance, he missed training camp while his agent negotiated a new contract with former GM Jim Benning. He also changed his stick after he was shipped a faulty batch of sticks from Bauer in the off-season and only changed back to his old stick two months into the season.

Confidence has been the most common explanation — or rather, lack of it. Confidence certainly plays a big role in hockey, particularly for skilled players. You have to believe a deke, pass, or shot is going to work or you might never even try it or, if you do try it, it won’t work.

Stickhandling guru Pavel Barber described Pettersson at his peak: “That anticipation, trusting your move will work, and knowing what your fake will do to the opponent before it happens. He’s not waiting for the defender to go — he’s anticipating it.”

In other words, doing your dekes requires full confidence — believing that the deke will work is a primary component of it actually working. You deke and then, before seeing if the deke has successfully fooled your opponent, you act as if it already has.

All of those theories may have some explanatory power but none of them are backed up by hard numbers. My theory, on the other hand, is.

Elias Pettersson has struggled this season because he isn’t posting enough on social media.

You might suggest that’s ludicrous and doesn’t make any sense. You might even suggest that this is clearly a jape or some sort of hyperbolic statement used to get at a serious point, which I have never ever done in the history of the universe. But the numbers don’t lie.

Early in the season, Pettersson himself said that he was cutting back on social media in an appearance on the Halford and Brough show on Sportsnet 650.

“I was doing a lot before last season,” said Pettersson. “I put a lot of effort in it, a lot of time, so I think I put a little too much focus on that and not focus on the right things. I’m just being honest now with how I feel.”

That may have been a mistake.

I ran the numbers, adding up his posts on both Instagram and Twitter by month, then comparing them to how he performed on the ice in that month. The results are eye-opening. 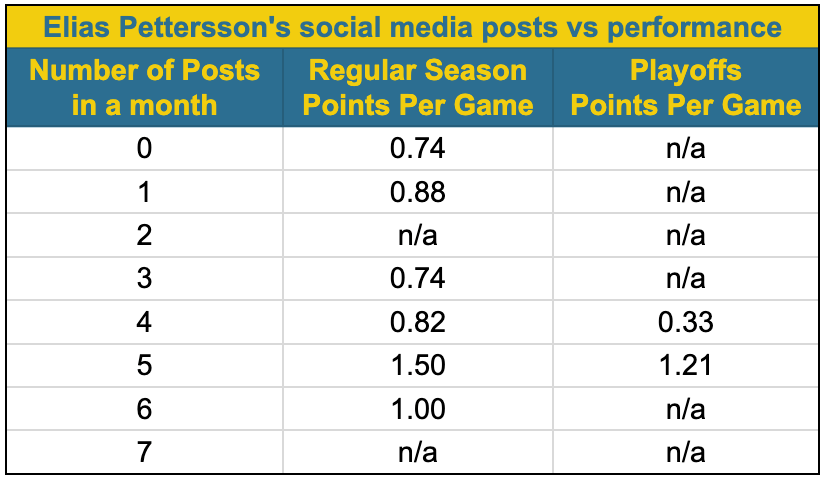 How can you argue with the statistics?

Okay, maybe I’m being a little bit facetious. While these numbers are true, they’re also junk statistics. His 1.50 points per game while posting five times comes from just one month — October, 2019.

There’s also a clear break between correlation and causation here. Perhaps Pettersson posts more on social media when things are going well on the ice, so the causation is the other way around, or perhaps there’s no connection whatsoever.

But there are a couple of more serious points to be made here.

One is that Pettersson doesn’t actually spend that much time on social media. Even in the off-season, the highest number of posts on social media he made in one month was seven. That’s nothing, even if you account for the occasional deleted post, a few Instagram stories or some of the streaming he did on Twitch during the 2020 offseason. Considering he has a social media manager, that doesn’t represent a huge time commitment or at least not any more than the non-hockey hobbies of other elite players.

If there were fans that were upset about Pettersson spending too much time building his brand on social media before this season, perhaps they’ll be more forgiving if he does more brand building in the future, since focusing entirely on hockey has resulted in the worst season of his career.

Where's the sense of play?

When Pettersson is at his best on the ice, he’s having fun. This season, there hasn’t been much of that. Some of that is because of the team’s struggles to start the season, which cast a dreary pall over everything, but even as the team has bounced back under Boudreau, that sense of play seems to be missing most of the time.

Pettersson had that same sense of play on social media, whether it was a brand deal doing comedic golf trick shots on Instagram or responding to a fan’s basketball challenge on Twitter. He would play around with clothes and photoshoots too.

I miss that sense of play, both on the ice and on social media. Maybe there is some correlation between the two that goes beyond the silly statistics I posted earlier. Maybe he needs to be reminded that he’s at his best when he’s just being himself.

At the very least, no one should ever get mad at Pettersson for posting too much on social media ever again. Maybe he'll just be doing it to get his game going again.

I Watched This Game: Spencer Martin rides again, stealing a point for Canucks against the Oilers
Jan 26, 2022 1:26 AM
Comments