Benning wants size on defence, but it shouldn’t come at the expense of skill

The Canucks have to improve defensively next season. Benning's plan? To look for "size-strength guys."

The Vancouver Canucks were arguably the worst defensive team in the NHL this past season.

That’s not hyperbole. At 5-on-5, they allowed the most scoring chances in the NHL and had the highest expected goals against according to hockey analytics site Natural Stat Trick. The only reason they didn’t also give up the most actual goals is because of the heroic efforts of Thatcher Demko. 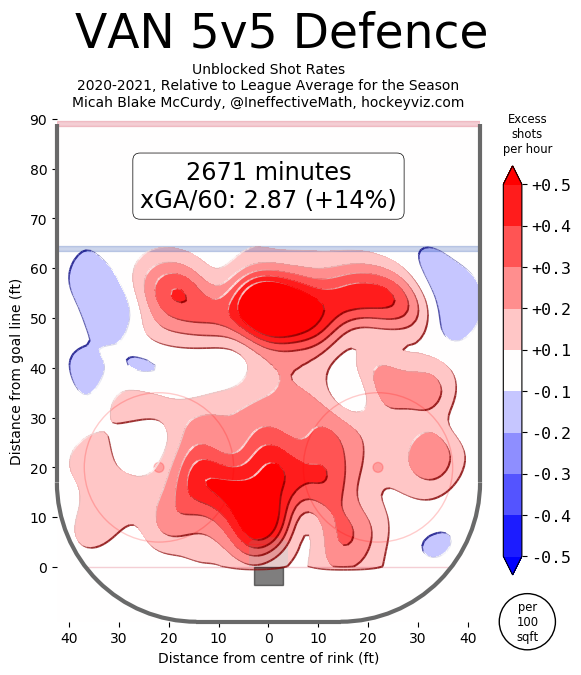 The Canucks can’t go into next season with the same defence but it won’t be easy to make improvements. The team will be tight to the cap after signing Elias Pettersson and Quinn Hughes to new deals and even a buyout or two won’t make much room. Considering the team also needs a third-line centre and a winger or two, there might not be much money left to upgrade the defence.

"What we're looking for is size-strength guys."

During an appearance with Mike Halford and Jason Brough on Sportsnet 650 on Thursday, Canucks GM Jim Benning addressed the need to improve defensively and identified the type of player they’ll be targeting: a “size-strength guy.”

“When we look back on our defense here moving forward, I think what we're looking for is size-strength guys that are going to be physical in the corners and in front of the net, that can make a good first pass to get the puck up ice,” said Benning.

Let’s take a moment before continuing with the rest of Benning’s comments to look back at how he described Erik Gudbranson after acquiring him in a trade with the Florida Panthers.

“He gives us size and strength, he can make a good first pass, he has a real hard shot, he can hammer it from the back end, and he's a high-character person,” said Benning at the time.

If anyone in the Canucks fanbase is concerned that Benning emphasized looking for a defenceman with size and strength who can “make a good first pass,” this is likely why. The last thing the Canucks need is another Gudbranson — a big, strong defenceman who can’t actually defend all that well and struggles to move the puck.

Hopefully, Benning doesn't have a Gudbranson-type in mind when he says he's looking for a "size-strength guy."

"We have enough guys that can skate and move the puck out."

Benning went on to explain his thinking behind what the Canucks need on defence.

“I feel like right now with Quinn [Hughes], [Nate Schmidt], and then I thought Jack Rathbone played well at the end of the year and we'll see where he's at at camp — we have enough guys that can skate and move the puck out. Tyler Myers can skate it up the ice too,” said Benning. “But we need to try to find some size-strength guys that are good defensively.”

One of the Canucks’ biggest issues this past season was getting the puck out of their own end of the ice, so it’s concerning to hear Benning say they don’t need defencemen who can move the puck out. The team gave up so many shots and chances not just because their defencemen struggled to defend but also because they gave opposing teams so many second and third chances when they couldn’t escape the defensive zone.

Benning seems to be stuck in a binary. A defenceman can either skate and move the puck or is big and good defensively. Well, perhaps he’s not fully locked into the binary, as he acknowledges that his team’s biggest defenceman, Myers, can also skate the puck up ice. Myers should be the counterexample that undoes the entire “size-strength” philosophy, to be honest. He’s arguably the team’s worst defenceman when it comes to actually defending.

Myers isn't exactly great at exiting the defensive zone either, though once he does, he's a capable skater who can move through the neutral zone effectively.

That’s not to say that size shouldn’t be considered when it comes to defence. Just look at the teams currently in the playoffs.

The Tampa Bay Lightning don’t shy away from smaller players, but only at forward. None of their defencemen are shorter than 6’1” and all tip the scales at over 200 lbs, led by Victor Hedman, who is 6’6” and 241 lbs.

The Vegas Golden Knights likewise don’t have any defencemen under 6’1” and only Shea Theodore is listed at under 200 lbs. Nicolas Hague is their biggest defenceman at 6’6” and 230 lbs, while Brayden McNabb and Nick Holden are both 6’4”.

The Montreal Canadiens are slightly smaller, but still don’t have any defencemen under 6’0”. Shea Weber, Ben Chiarot, and Joel Edmundson are all massive, each over 225 lbs.

The New York Islanders have the smallest blue line of the four. They still only have one defenceman under 6’0” — third-pairing defenceman Andy Greene. Nick Leddy is 6’0” but also 207 lbs, while they also boast 6’5” Scott Mayfield, 6’4” Noah Dobson, and 6’3” Adam Pelech.

The thing about these four defence corps is that they’re not just big — they’re skilled. Their big defencemen can also skate, move the puck, and defend speedy forwards effectively. The size is a complement to their abilities, not necessarily the main source of those abilities.

What the Canucks really need is players who are good defensively and who can also skate and move the puck, regardless of size. If they can find defencemen that fit that description who also have some weight to throw around in the defensive zone, that would be ideal, but focusing on size can lead to some poor decisions, ie. Gudbranson.

Finding complementary players is certainly worthwhile, but "complementary" doesn't have to mean one big guy and one little guy, like putting together lines in 1988's Nintendo Ice Hockey.

"Everybody seems to be looking for those types of players."

Benning also spoke to the challenge of finding the players they need.

“Right now, it seems like it's hard to find good center icemen. They come at a premium,” said Benning. “It seems like the other hard things to find are right-shot players — right wingers and even right-shot defenceman. I don't know, for whatever reason, right now everybody seems to be looking for those types of players.”

Yes, for some reason — who can possibly know why? — teams are looking for centres, right wingers, and right-shot defencemen. That encompasses three of the five positions for skaters on the ice. For some reason, teams want those types of players.

While Benning says those are premium positions “right now,” the truth is that centres and right-side defencemen have always been in-demand. That’s part of the reason why it was so troubling when Benning let two right-side defencemen walk in free agency last offseason — Chris Tanev and Troy Stecher — and has done little to shore up the team’s prospect depth at centre.

At this point, the Canucks have just one right-handed NHL defenceman signed for next season: Tyler Myers. Fellow right-handers Travis Hamonic and Jalen Chatfield are unrestricted free agents. They’ll also have Jett Woo and Madison Bowey in the AHL.

The Canucks may have to bring Hamonic back if they can’t find another right-side defenceman somewhere. Finding an upgrade on the right side won’t be easy. As Benning said, other teams are looking for that type of player for some reason.

On the left side, Benning talked about bringing back another veteran defenceman: Alex Edler.

“When I talked to Alex at the end of the year, he wants to come back for another season,” said Benning. “We actually are having a conversation with his agent today Mark Stowe and we're going to just explore what that looks like. We'd like to bring Alex back, he's been a great player for our team for a long time but in a flat cap world, we're gonna have to just take a look at what that's gonna take to get him signed.”

If the Canucks bring Edler back, something has to change with his usage. Edler was deployed in a shutdown role, playing primarily against opposition first lines while starting the majority of his shifts in the defensive zone and averaging nearly 21 minutes per game.

With his declining mobility, expecting Edler to still play in a matchup role is asking a lot. The problem is, if he re-signs, who else on the left side is going to play that role? Hughes still needs to work on his defensive game and needs a better partner than Hamonic if he’s going to face tougher matchups. Meanwhile, Rathbone will be a rookie and likely to be sheltered.

Beyond that concern, if the Canucks re-sign both Edler and Hamonic, where will the improvement come from? They’ll simply be bringing back the same defence as last year, just with the addition of Rathbone. While the Canucks are understandably high on Rathbone’s potential, if he’s the only change on defence, that puts a lot of pressure on the young rookie.

With that in mind, Benning is right to be looking for a defenceman this offseason. Fans can only hope that any “size-strength guys” he finds can also skate, move the puck, and defend.