How deep is the Canucks’ prospect pool at each position?

The Canucks need to add depth at several key positions in their prospect pool in the coming offseason.

The NHL Entry Draft is two months away, which actually isn’t that much time, if you think about it. Teams will be holding their pre-draft scouting meetings not too long from now to finalize their list of who they want to pick. Typically, a team will come out of these meetings with a list of 40-50 players, as well as some additional position-specific lists if they exhaust their main list.

While teams typically just go for the best player available in the first few rounds of the draft, the difference between prospects in later rounds is so slim that it might as well be non-existent. At that point, it’s worth looking at position and filling in holes in your team’s prospect pool.

Even at the top of the draft, position can play a role in decision-making. For instance, if a team thinks that two players are neck-and-neck on their list, with no consensus which one is better, perhaps it’s worth taking the centre if you need centres, or the right-handed defenceman if that’s your position of need.

With that in mind, let’s take a look at the Canucks’ current prospect pool and where they might have some shallow spots that could use a little more water.

Note: on these lists, players in bold are signed to a contract with the Canucks. 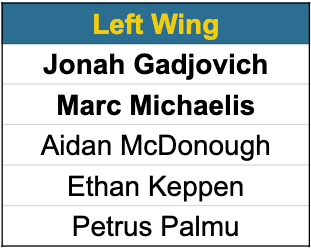 The graduation of Nils Höglander from prospect to part of the Canucks’ young core is a big positive, but it also reveals a frightening lack of depth at left wing in the team’s prospect pool.

Marc Michaelis played 15 games for the Canucks this season but never stood out and he’ll be 26 next season, stretching the definition of “prospect.” Petrus Palmu is technically still in the Canucks’ system, but he’s unlikely to return to North American with the Canucks organization after a falling out.

That leaves three legitimate prospects on left wing. One is Jonah Gadjovich, who got into one game with the Canucks after a fantastic season in the AHL. If he can continue to push his skating this offseason, he could make an argument for a fourth-line spot on the Canucks.

Aidan McDonough has been solid at Northeastern University, with 20 points in 21 games this past season, showing that he can produce points without Tyler Madden. He’s already 21, however, and it’s unclear how long he plans to stay at Northeastern and when he might sign a professional contract.

Ethan Keppen, meanwhile, missed almost a full year of hockey when the OHL cancelled their season. He signed a tryout contract with the Utica Comets and played 7 games in the AHL, recording one assist. It’s hard to assess his progress, but his previous season in the OHL was dire, with just 29 points in 44 games. 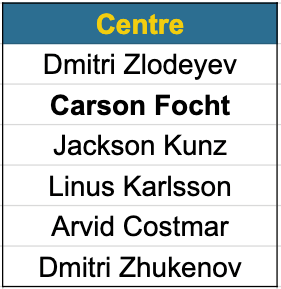 The Canucks look deeper at centre than they really are. While they have six centre prospects, they each have limited upside. The Canucks might get one bottom-six centre out of this group.

Dmitri Zlodeyev had an unspectacular 12 points in 16 games in the MHL, Russia’s top junior league, but he also had a not-too-shabby 7 goals in 19 VHL games, the second-tier of men’s hockey in Russia. He’s a competitive, two-way player and could potentially crack an NHL lineup.

Similarly, Carson Focht might have a future as a bottom-six centre in the NHL. He had 12 points in 28 games for the Utica Comets this season and seemed to please the right people with his performance.

After that, things get a little iffy.

Jackson Kunz had 43 points in 50 games for the Green Bay Gamblers in the USHL, but has some major question marks around his skating. Linus Karlsson was one of the top players in the Allsvenskan, Sweden’s second-tier men’s league, with 51 points in 52 games, but his game might not translate to the NHL. Still, a longshot still has a shot.

Arvid Costmar, on the other hand, hasn’t seemed to make much progression since he was drafted in 2019. He had a strong performance at the World Juniors but will need to take a big step forward next season.

Finally, Dmitri Zhukenov is 24, playing in the VHL, and largely off the Canucks radar at this point. 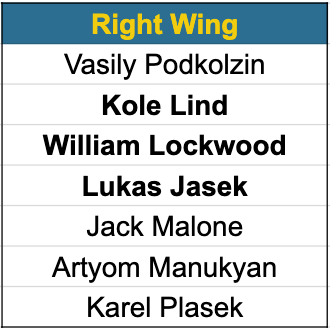 This is the Canucks’ biggest position of strength, with a blue-chip prospect in Vasili Podkolzin, who could potentially jump right into the Canucks’ top-six next season.

They also have a two-way pest in Kole Lind, who has shown excellent development in the AHL over the last two years and could play on the team’s third line next season. Then there’s the Will Lockwood, who may not have a ton of upside, but should add speed to the Canucks’ bottom-six when he makes the jump.

After that trio, things are a little uncertain.

Jack Malone had to go back to the USHL after the Ivy League schools cancelled their hockey season and had 41 points in 44 games — respectable, but not amazing for a 20-year-old with NCAA experience.

Lukas Jasek has been plugging away in the AHL for the Utica Comets, doing whatever is asked of him, including shifting to centre when asked. He had 23 points in 28 games but he’ll be 24 next season and still hasn’t had even a sniff at the NHL level.

Artyom Manukyan was an intriguing gamble on a small, skilled player when the Canucks drafted him in 2018 but he hasn’t progressed much since. Similarly, Karel Plasek hasn’t done enough in the Czech league to justify getting a look at him in North America. 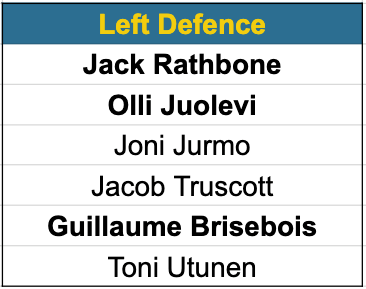 Left defence is another position of relative strength for the Canucks.

After Podkolzin, Jack Rathbone is arguably the Canucks’ top prospect. He didn’t look out of place in his NHL audition at the end of this season and can be safely pencilled into the Canucks’ lineup next season.

Olli Juolevi, on the other hand, is still so hard to get a read on. He played 23 games with the Canucks this season and looked right at home at times and completely out of his depth at other times. He’ll likely be somewhere on the Canucks roster to start next season, but more likely as a seventh defenceman than in the lineup.

Joni Jurmo was the team’s top pick in the draft last year, albeit in the third round, and has some intriguing upside. He could be a real boom-or-bust type of prospect. He played 20 games in the top Finnish league without recording a point but had 8 points in 10 games in Mestis, the second-tier Finnish league.

Jacob Truscott has a lot of the tools necessary to eventually make the NHL but needs refinement to put it all together. He had 5 points in 26 NCAA games for the University of Michigan as a freshman — his real test will be as a sophomore to see if he can seize more ice time and be productive with it.

Guillaume Brisebois has played NHL games but I don’t see an NHL future. He’ll likely be in Abbotsford next season.

As for Toni Utunen, he has yet to break through in Finland, still playing bottom-pairing minutes in the Liiga at the age of 20. It remains to be seen if the Canucks will bring him over to try his luck in the AHL. 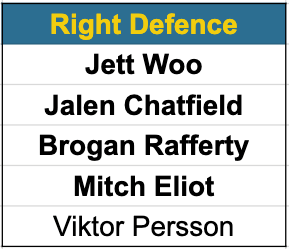 Here’s where things get dicey. The Canucks don’t have a top prospect at right defence, but could have a potential third-pairing guy.

Jett Woo is an intriguing prospect, with a physical defensive game but enough skill with the puck to still make plays. He made his pro debut this year, putting up 5 points in 28 games with the Utica Comets. He’s likely still a year or two away from pushing for an NHL job.

Jalen Chatfield played for the Canucks this season but the results weren’t always pretty, primarily because of difficulties moving the puck out of the defensive zone.

Brogan Rafferty was a point-per-game player for the Canucks this season! Problem is, he only played one game and the Canucks didn’t see fit to give him another look. He’s likely gone in free agency.

Mitch Eliot is an AHLer.

The one wild card is Viktor Persson, who some in the Canucks organization are quite high on. Persson is a strong skater and passer whose game could translate well to the NHL. This past season, he bounced between Swedish leagues, including a four-game stint in the SHL. Solidifying a spot in the SHL next season would be a good start towards proving himself as someone with an NHL future. 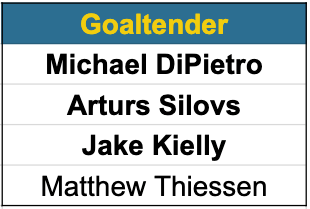 The top prospect here is obviously Michael “Mikey” Dipietro. The Canucks just have to hope his development wasn’t hindered by spending the bulk of the season on the taxi squad instead of playing games.

DiPietro eventually got into four games with the Utica Comets, posting a .916 save percentage. He also got an invite to join Team Canada at the World Championships as their third-string goaltender.

Arturs Silovs played a few more games this season than DiPietro, but only just barely. He played six games in the Latvian league, two games for Latvia at the Deutschland Cup — where he had a .932 save percentage — and one game for the Manitoba Moose in the AHL. It’s really hard to assess where his game is at from such limited playing time.

For Jake Kielly, it’s a similar story. He only played seven games for the Utica Comets and his .878 save percentage wasn’t great. With the Canucks combining their AHL team with the St. Louis Blues, the Blues’ goaltenders got the bulk of the starts.

Finally, Matthew Thiessen got into eight games for the University of Maine in the NCAA, with the same ugly save percentage as Kielly: .878.

It’s safe to say that DiPietro and Silovs are the only two goaltenders with legitimate NHL potential at this point, though stranger things have happened.

Canucks prospect Arvid Costmar named one of Sweden's top-three players as they're knocked out of 2021 World Juniors
Jan 2, 2021 6:10 PM

Will Michael DiPietro be the Canucks' only representative at the Hockey World Championship?
May 12, 2021 1:55 PM