Breaking down a nifty goal (that shouldn't have counted) with pictures.

The Vancouver Canucks needed more from Thatcher Demko on Tuesday night than just the 31 saves he made on 32 shots.

After starting their five-game road trip with three straight losses, albeit to three of the best teams in the NHL, the Canucks rebounded with a big win over the Washington Capitals. Following that up with a win over the Nashville Predators, one of the top teams in the Western Conference, was key to heading back home feeling good about themselves.

In order to get that win, Demko of course had to be excellent in net and he was. But the Canucks also needed a little bit of offence from Demko.

It was a savvy play from Demko that led to Elias Pettersson’s game-tying goal in the second period on Tuesday night and there’s enough going on that it needs a full breakdown in a feature we call Breakdowning.

Let’s start with the video.

Seems simple enough, right? But let’s delve into some of the details.

To get into the roots of how this goal happened, we have to back up a bit. You might have spotted something odd in the video: the Canucks’ net was off its moorings. 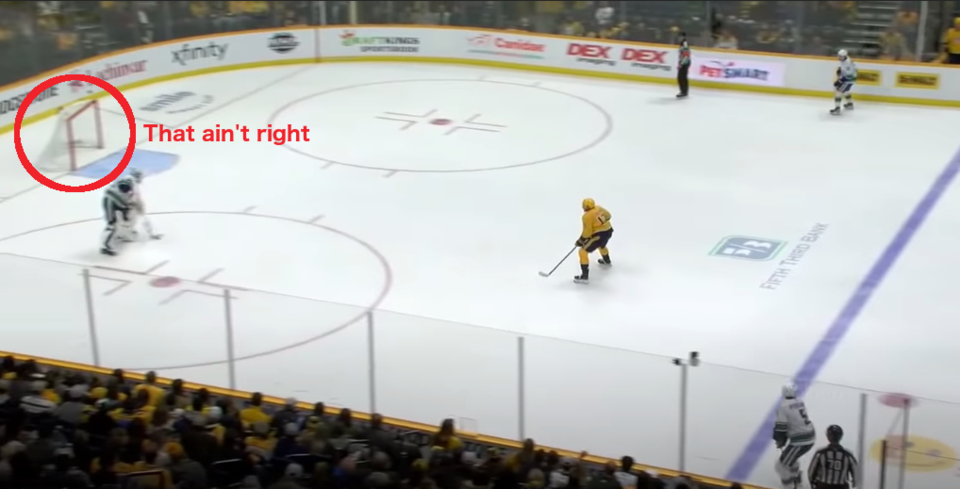 Typically speaking, that’s not allowed. Normally, play gets blown dead when the net gets knocked off, which makes sense. If you could just move the net whenever you wanted, the NHL’s best goaltenders would just turn it around and push it up against the boards so that no one could score.

But referees don’t have to immediately stop play when the net comes off either. Imagine a scenario where Elias Pettersson has a breakaway and is about to score on, say, the Toronto Maple Leafs and Auston Matthews rushes the Canucks net and knocks it off its moorings before Pettersson can score. It would be pretty ludicrous to blow play dead in the middle of Pettersson’s breakaway.

Deliberately knocking the net off is a delay of game penalty but the same principle would hold if the net was knocked off accidentally. It would be patently unfair if the net getting knocked off its moorings disallowed a goal at the other end of the ice.

So, the NHL rulebook has a rule in place for this type of situation: Rule 63.2. Here’s the relevant paragraph:

“When the net is accidentally displaced by an attacking player, and the defending side is in control of the puck and moving out of their zone, play shall be permitted to continue until such time as the nonoffending team loses control of the puck. The resulting face-off will take place at a face-off spot in the zone nearest the location where the play was stopped, unless it is in the non-offending team’s defending zone, and as such the ensuing face-off would be outside the blue line at one of the face-off spots in the neutral zone. It is possible for a goal to be scored at one end of the rink while the net at the other end has been dislodged, provided that the team being scored upon is the team responsible for dislodging the net at the other end of the rink.”

That’s perfectly clear: as long as the team getting scored on knocked the net off at the other end, there’s no problem.

Let’s back up the tape to about a minute before the goal was scored to see how the net was dislodged.

So, it’s definitely Thatcher Demko’s fault that the net was knocked off. As Matt Duchene comes around the back of the net, Demko slides hard into his right post to prevent any chance of a wraparound. That jostles the net significantly so that when he pushes off the left post with his skate a moment later, it comes right off.

Let’s call it karma for that time when Demko was called for delay of game earlier this season when he accidentally knocked the net off.

But that’s not all the referees, which included veteran of four Stanley Cup Finals Chris Rooney, messed up on this play. Let’s keep going. 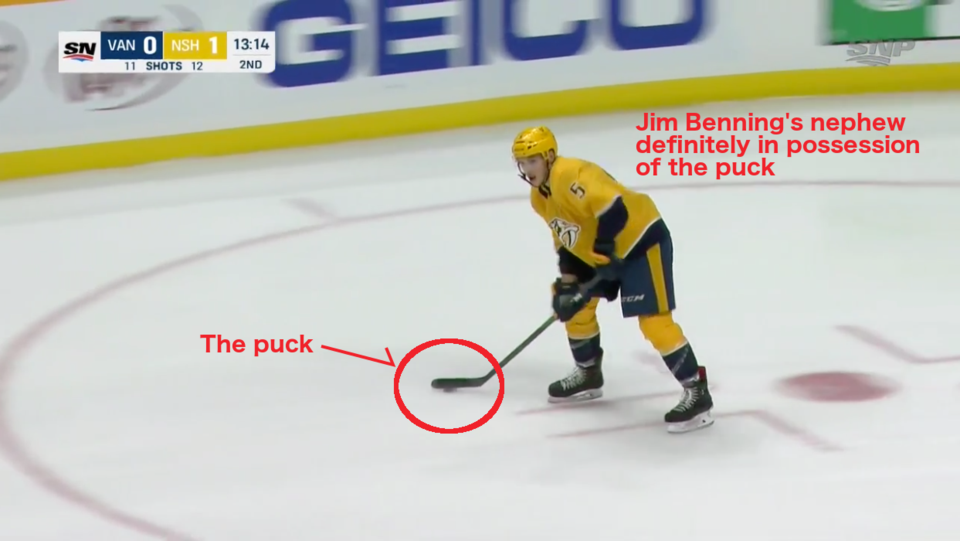 Who’s this? That would be Matt Benning, nephew of former Canucks general manager Jim Benning.

Inside that circle is the puck on the blade of Benning’s stick. The NHL rulebook is frustratingly vague when it comes to defining “possession” but this leaves no wiggle-room: Benning has the puck on his stick and is about to pass it up the ice. It couldn’t be any more clear.

As we just saw in Rule 63.2, when a net is knocked off “play shall be permitted to continue until such time as the nonoffending team loses control of the puck.” In this case, the Canucks are the nonoffending team and they don’t have the puck anymore. Again, play should’ve been blown dead.

Fortunately for the Canucks, it wasn’t.

Let’s jump ahead a little. The Predators chipped the puck into the Canucks’ zone, but Kyle Burroughs intercepted the puck and chipped it right back out, where it was picked up by Vasily Podkolzin, who dumped the puck in for Nils Höglander to win on the forecheck, starting an offensive zone possession for the Canucks.

We’ll pick it up partway through that possession. 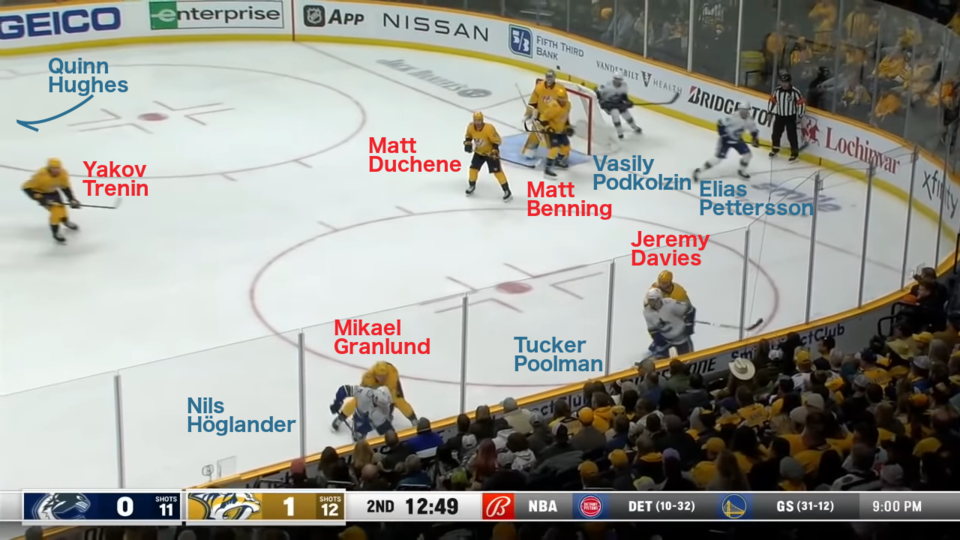 The Canucks have their youth line of Nils Höglander, Elias Pettersson, and Vasily Podkolzin on the ice, with the defence pairing of Quinn Hughes and Tucker Poolman.

The Predators, on the other hand, are mid-change. They’ve got part of their top line on the ice, with Matt Duchene and Mikael Granlund, but Yakov Trenin has come on to replace Filip Forsberg. They’re on with the pairing of Matt Benning and Jeremy Davies.

Poolman has pinched down the boards and Höglander is covering for him at the point. The puck gets past Poolman and Höglander battles with Granlund, with the latter able to win the battle and force the puck out of the Predators’ zone and down the ice.

By that time, Duchene, Granlund, Benning, and Davies have all been on the ice for over a minute and are looking for a line change. That’s key to what happens next. 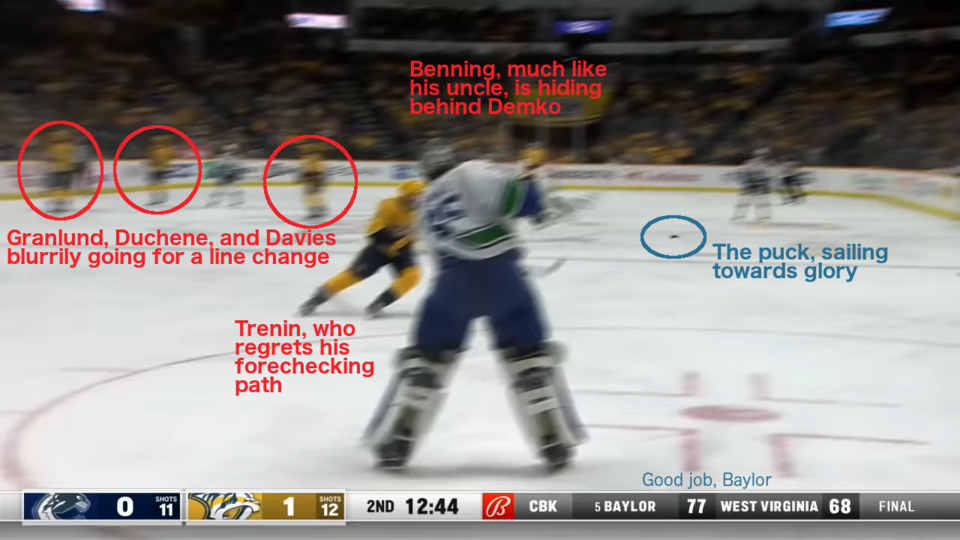 You see, they go for a line change. Very shocking, I know.

Granlund, Duchene, and Davis all head for the bench, though not exactly at great speed. They’ve got Trenin forechecking and Benning stay on the ice as a safety valve, so maybe those three players thought they were safe.

Also, it’s the second period, meaning both teams have to deal with the long change.

If you recall the first screenshot, which showed the net off its moorings, Hughes and Poolman come back on opposite sides of the ice, giving Demko two clear options for a safe and easy pass. That likely plays into Trenin’s indecision, as he just stays in the middle, unsure which defenceman Demko will pass to.

But Demko doesn’t have to play it safe. The net’s off its moorings behind him. Even if he gives the puck away, the Predators can’t score. That gives him the freedom to try something a little more ambitious: a stretch pass to catch the Predators on their line change. 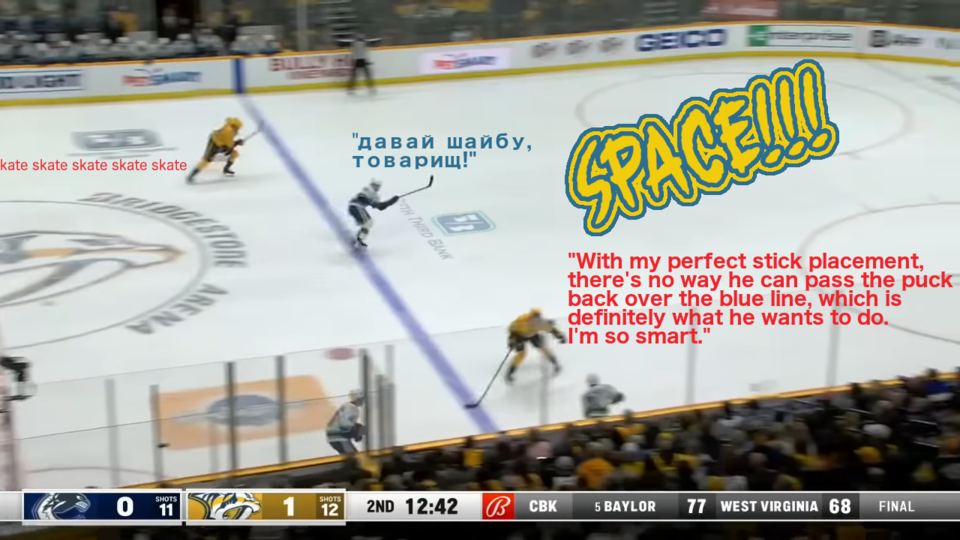 It very much works. Pettersson tips Demko’s pass ahead to Höglander at the Predators blue line and there’s only one player back to defend: Benning.

There is a ton of space in the Predators’ zone behind Benning and Podkolzin has smartly picked up speed in the neutral zone, so all Höglander has to do is put the puck into space for Podkolzin to skate onto.

Meanwhile, Philippe Myers has come off the bench for Davies and is doing his darnedest to catch Podkolzin. 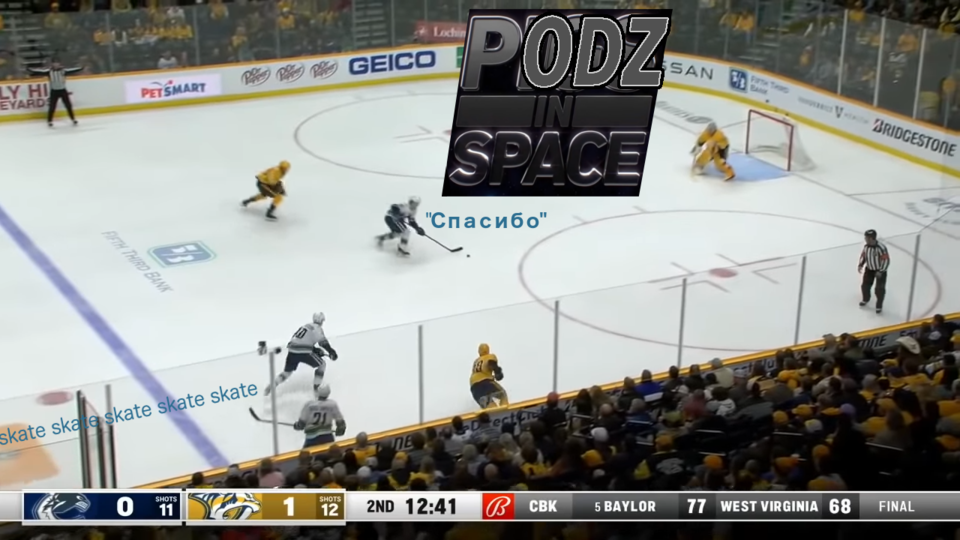 And now, another pulchritudinous episode of PODZ IN SPAAAAAAAACE!

Höglander’s neat little saucer pass is perfectly weighted for Podkolzin, who is in alone on goaltender David Rittich, with Myers hot on his heels.

Most importantly, Pettersson didn’t rest on his laurels after tipping the pass to Höglander but got his feet moving and drove towards the net behind Podkolzin.

Benning, meanwhile, is completely out of the play after aggressively closing on Höglander at the blue line, which is surprising — it’s not like a Benning to be over-aggressive and not think of the long-term consequences. 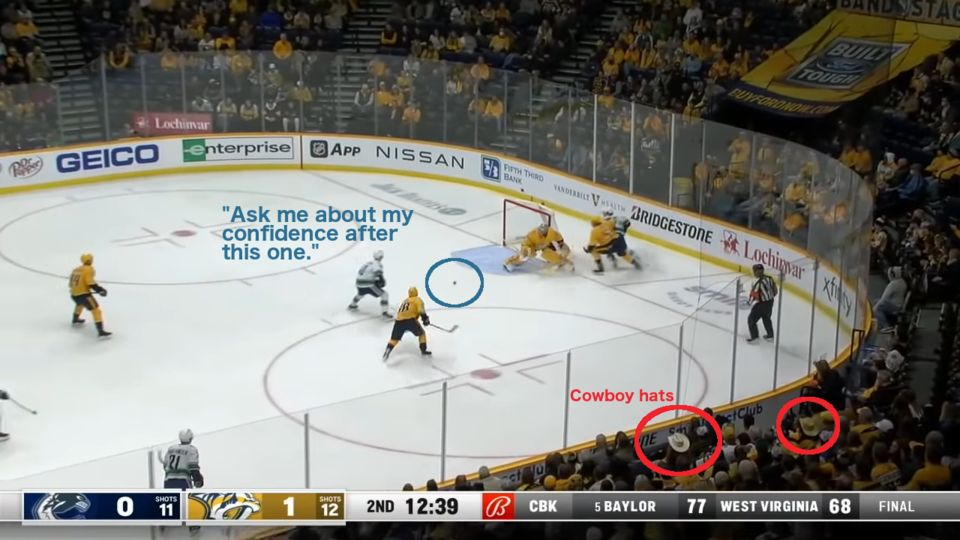 Myers does well to put pressure on Podkolzin with his stick, preventing a deke to his forehand, so Podkolzin resorts to a backhand shot that Rittich stops.

Rittich does, however, give up a very juicy rebound and Pettersson loves him some delicious juice.

Also, cowboy hats in the crowd, just in case you weren’t sure if this game is in Nashville. 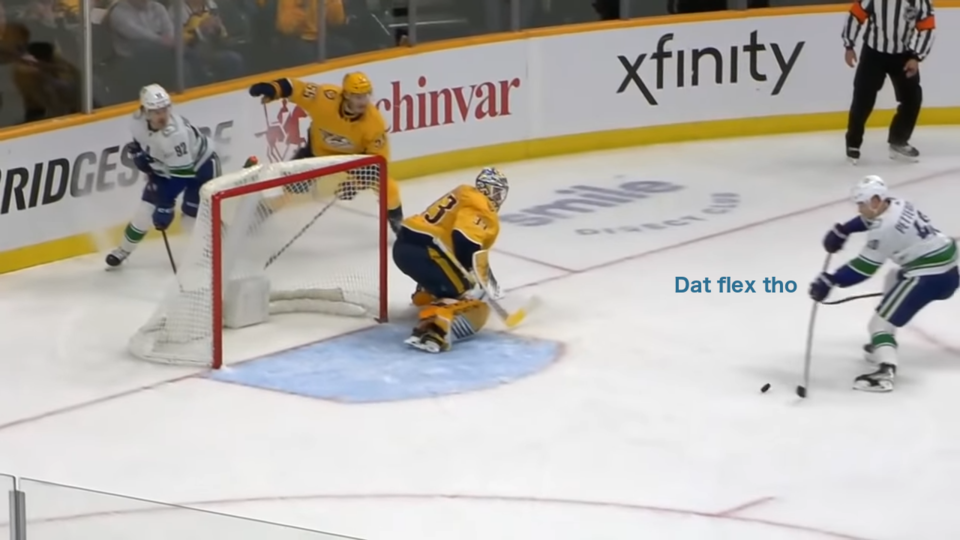 Pettersson could have been forgiven for just chipping the puck into the empty net but he doesn’t do that.

Instead, even on this little snapshot on a rolling puck, Pettersson gets some flex on his stick and fires the puck upstairs.

Rittich likely didn’t have much of a chance anyways but he did lunge back with his right pad. With Pettersson’s emphatic finish, it didn’t matter.

That kind of finish deserves a friendly facewash.