Unfortunately, not all Calgary Flames fans are taking the joke in good humour — "You wouldn't believe the malicious calls."
Dec 1, 2020 12:06 PM By: Daniel Wagner 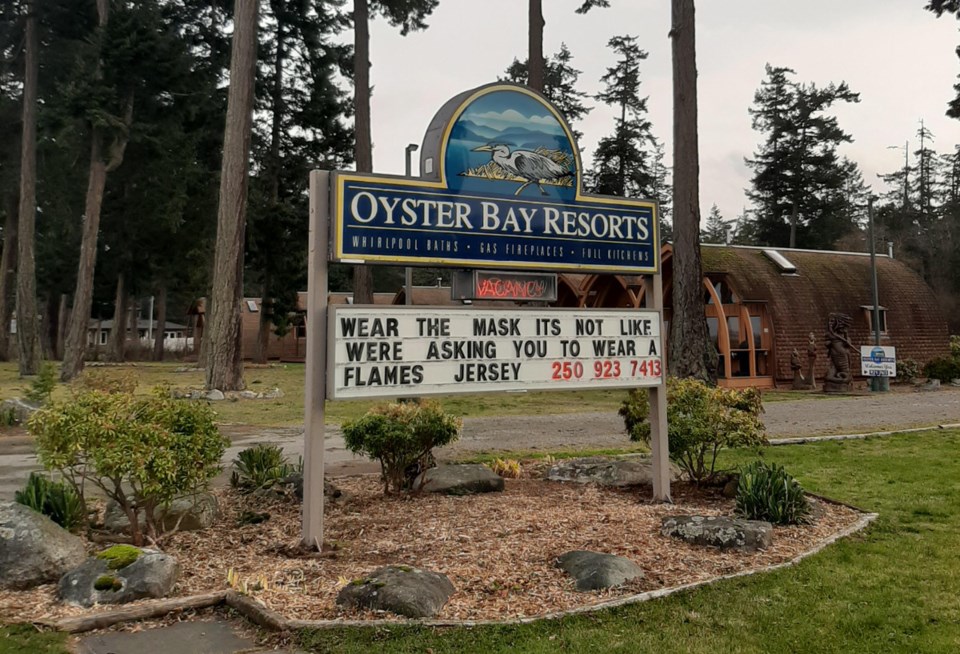 In the middle of a global pandemic, we all need to take steps to protect each other and ourselves. One of the easiest and most effective ways to reduce the spread of COVID-19 is to wear a mask, but that hasn’t stopped conspiracy theorists from protesting against the simplest of health recommendations.

“Wear the mask,” reads their letterboard sign by the road. “It’s not like we’re asking you to wear a Flames jersey.”

The devastating burn on the Calgary Flames — which is the opposite of the usual cause and effect relationship between flames and burns — was the work of Andy Peterson at Oyster Bay Resorts, a long-time Vancouver Canucks fan and aficionado of sign-based comedy. A photo of the sign quickly made the rounds on social media, including the Hockey Night in Canada Instagram, where it has racked up over 12 thousand likes.

“It’s amazing how much it’s taken off,” said Peterson. “To see it shared on the Hockey Night in  Canada page was just surreal. It was the greatest thing ever, I couldn’t believe it.”

The sign has been a hit in person as well, with many people stopping to take pictures. Currently, the sign has a slightly different message on the opposite side.

“A guy pulled in here Saturday and said, ‘I’ve got a bunch of fans that are Leafs fans, can you change one side to Leafs?’ and I said sure!” said Peterson with a laugh. “So one side says Leafs and the other side says Flames.”

Peterson was quick to point out that it was all in good fun and tongue in cheek. Part of the fun of a good sports rivalry is the good-natured sniping between fanbases. Unfortunately, it’s not always good-natured and some Flames fans didn’t find the joke funny.

“You wouldn’t believe the malicious calls my wife has had to deal with at the front desk,” he said. “One woman called saying she was from Red Deer and she just screamed for five minutes about how offensive it was and ‘how dare you.’”

“Another guy called and wanted to know how much it was for four chalets over Christmas,” he added. “It was going to be a little over two grand and then he said, ‘Well you can ****ing kiss that goodbye, because I’m a Flames fan,’ and hung up.”

While that is the risk of a photo going viral with a phone number visible, the amount of vitriol definitely caught Peterson by surprise, though it has thankfully been limited to Flames fans rather than anti-maskers.

“I can’t believe people act like that and take it that seriously,” he said. “It’s a sign, dude.”

Fortunately, the response has been overwhelmingly positive, with Peterson finding that the joke disarms people and makes it easier to remind them to wear masks. Or, if they’re already wearing a mask, it might at least bring a smile to someone’s face underneath it.

"It's something we have to do now and you might as well be nice about it," said Peterson. "I'm not going to walk into Walmart and beat someone up over it. I'd rather make someone laugh!"

Adam Gaudette kicked his wife in the head at their wedding and now it’s international news
Nov 24, 2020 11:16 AM