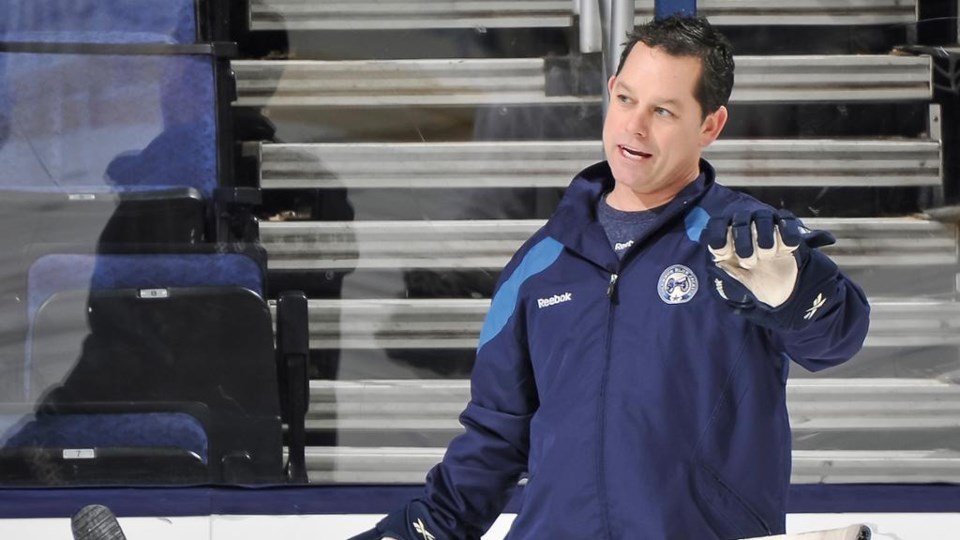 Ian Clark has been the Canucks goaltending coach for the last two seasons after seven seasons with the Columbus Blue Jackets. photo: NHL

Day one of NHL free agency was all about the goaltenders. Matt Murray signed a new deal with the Ottawa Senators after they traded for the RFA’s rights at the draft, while Anton Khudobin re-signed with the Dallas Stars after a stunning playoff run. Late in the evening, Corey Crawford left the Blackhawks for the New Jersey Devils.

Then there was the goaltending carousel. Cam Talbot left the Calgary Flames for the Minnesota Wild. Jacob Markstrom left the Vancouver Canucks to take Talbot’s place with the Flames. With Markstrom gone, the Canucks signed Braden Holtby, formerly of the Washington Capitals. His spot with was taken by Henrik Lundqvist from the New York Rangers. Taking Lundqvist’s place: Keith Kinkaid, who was last with the Montreal Canadiens.

That’s eight goaltenders signed to new contracts on the first day of free agency, seven of them to new teams — a major upheaval in the goaltending landscape. That’s not including a handful of lesser signings, like Malcolm Subban re-signing with the Blackhawks.

For the Canucks, they bid farewell to their MVP for the last two seasons to see him play for a division rival. In his place came a player with Stanley Cup pedigree, Braden Holtby.

The only concern is that he didn’t exactly perform like top-tier goaltender last season. In fact, he was arguably one of the worst goaltenders in the NHL, posting an .897 save percentage. That’s concerning enough as a one-time outlier, but it was arguably part of a pattern over the last three seasons.

By contrast, the three previous seasons were easily Holtby’s best. He put up three dominant seasons with save percentages north of .920 — .923, .922, and .925 — won a Vezina and a Jennings, and earned First and Second-Team All-Star nods. Over those three seasons, Holtby had a .923 save percentage.

That’s a significant difference between those two three-year sections of Holtby’s career. What could be the cause?

You could point to a number of causes and the truth is it’s likely a combination of things. Perhaps the Washington Capitals’ defensive systems changed significantly. Perhaps Holtby hit his peak in his mid-20’s and experienced a natural decline as he got closer to 30. Perhaps it was just a string of bad luck.

But it seems awfully coincidental that those three-year segments correspond to Holtby spending time with two different goaltending coaches.

From 2014 to 2017, the three best years of Holtby’s career, he was coached by Mitch Korn, a legend in the goaltending coaching community. Korn worked with greats like Grant Fuhr and Dominik Hasek, and oversaw the dominant goaltending pipeline with the Nashville Predators for 15 years.

Is it any coincidence that the goaltending coach that helped Hasek and Pekka Rinne win Vezina trophies also helped Holtby win his Vezina?

After 2017, Korn took on a different role with the Capitals. Considering retirement and wanting to take a step back and spend more time at home, Korn became the Director of Goaltending, overseeing the team’s goaltending coaches. That meant less day-to-day work with goaltenders.

Taking his place was Scott Murray, previously the goaltending coach for the Capitals’ AHL affiliate, the Hershey Bears.

Holtby’s three seasons with Murray were the three worst seasons of his career. With one exception, of course: he won the Stanley Cup in 2018. Even that was under the influence of Korn, who took a more active role working with Holtby heading into the playoffs.

After winning the Stanley Cup, the Capitals let go of Barry Trotz, their head coach. He was hired by the New York Islanders and Korn followed him. With Korn gone, Holtby’s game continued to slip until he was legitimately one of the worst goaltends in the NHL last season.

That doesn’t mean Murray is a bad coach. Sometimes a player and a coach just don’t click, whether it’s stylistically or personality or some other reason. It’s hard to look at Holtby’s three seasons with Korn and three subsequent seasons without him and not see a pattern.

Fortunately for the Canucks, they have a goaltending coach that is often spoken of in the same breath as Mitch Korn: Ian Clark. When asked if he believes that Clark can help Holtby bounce back from his disappointing 2019-20 season, Jim Benning was effusive.

“I do believe that,” said Benning. “Ian is excellent at what he does. Every goalie that we've ever given him, from the start of the year to the end of the year, you see how much they improve, including Jacob Markstrom. He's done a wonderful job with our goalies.

“Braden had Mitch Korn in Washington for a while and thrived under him and Ian Clark comes from that same school of thought as far as goaltending is concerned. I expect Ian to do an excellent job with him and I think he's gonna have a real good season for us.”

If it’s just a matter of coaching, then it doesn’t seem unreasonable to expect a return to form from Holtby. Clark is one of the best in the business. He coached Sergei Bobrovsky to two Vezina wins with the Columbus Blue Jackets, then when Bobrovsky left Clark and the Blue Jackets for the Florida Panthers, his save percentage dropped from .913 to .900 this past season. Certainly there are other factors involved, but the Ian Clark factor can’t be dismissed.

When asked about whether working with Clark was a selling point, Holtby didn’t hesitate.

“It was definitely big,” said Holtby. “I know how far a good relationship and talent of a goalie coach can go, so it was definitely a big part of really wanting to come to Vancouver and have a good chance of success.”

When Holtby was signed by the Canucks, one of the first people he talked to was Clark. Then he immediately asked for Thatcher Demko’s number so he could call his new goaltending partner. Now it’s up to all three of them to provide top-tier goaltending for the Canucks next season.

9 options for the Canucks’ goaltending next season other than Jacob Markstrom
Oct 5, 2020 11:53 AM
Comments
We welcome your feedback and encourage you to share your thoughts. We ask that you be respectful of others and their points of view, refrain from personal attacks and stay on topic. To learn about our commenting policies and how we moderate, please read our Community Guidelines.