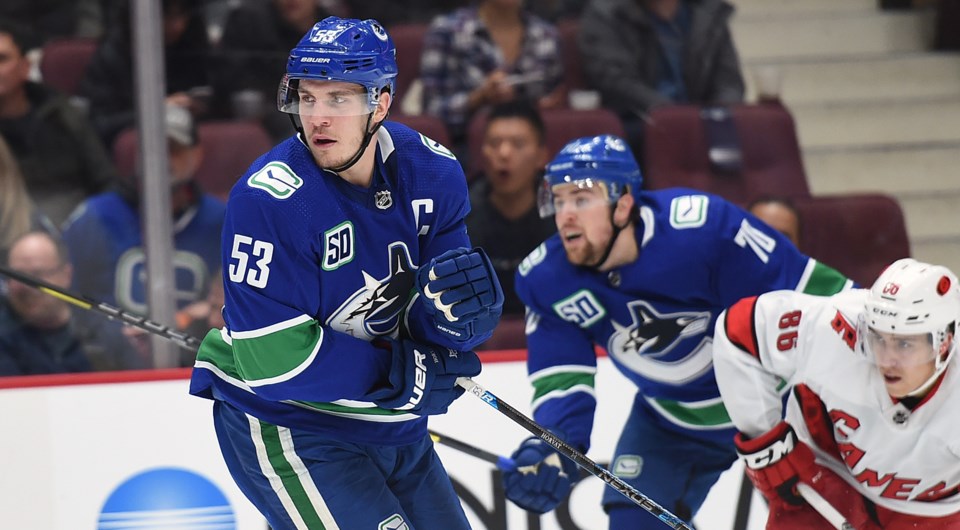 Should the Canucks be open to trading Bo Horvat? photo: Dan Toulgoet

The Vancouver Canucks are in a bad place right now and starting to look an awful lot like the 2017-18 Edmonton Oilers, a team that crashed and burned after finally making the playoffs and coming one game away from the Western Conference Final the year before.

It’s an uncomfortable parallel, because the Oilers missed the playoffs for another three seasons and are only now starting to look like a legitimate playoff team, albeit on the shaky ground of 38-year-old Miike Smith playing the best hockey of his career. It suggests that last season’s playoff success, rather than being a sign of good things to come, was an anomaly.

There is another team, however, that the Canucks can compare themselves to that provides a little bit more optimism: the 2016-17 Colorado Avalanche.

"It all came back to haunt them.”

Like the Canucks, the Avalanche had a talented young core and appeared to be ready to take the next step. A few years previous, in fact, they not only made the playoffs but finished first in the Central Division on the back of their young core. Then it all went awry.

The 2016-17 season was the absolute nadir for the Avalanche. As bad as the Canucks were that season — they set a franchise record for the fewest goals in a season — the Avalanche were an order of magnitude worse, finishing the season with just 48 points. They were out-scored by 112 goals that season. It was dire.

That’s in spite of having extraordinary young talent like Nathan MacKinnon, Gabriel Landeskog, Ryan O’Reilly, Matt Duchene, and Tyson Barrie. They weren’t supposed to be that bad.

It could be seen as a warning sign for the Canucks, who were starting to follow the path of the Avalanche in many ways. As a former Avalanche blogger who goes by Jibblescribbits online said, “The Avs spent 6 years not realizing they were in a rebuild and this is when it all came back to haunt them,” which sounds a lot like the Canucks under Jim Benning.

Then, very suddenly, the Avalanche reversed their fortunes. After finishing dead last in the NHL by a wide margin in 2016-17, they made the playoffs the very next season. The next year, they made the playoffs again, winning a round and going to game 7 in the second round. Last season, they went to game 7 in the second round again after finishing second in the Western Conference.

Now the Avalanche are considered one of the top teams in the NHL and are one of the favourites to win the Stanley Cup this season.

So, how can the Canucks follow the path of the Avalanche to bounce back from their current struggles?

Trade a key member of the young core

First of all, there has to be a willingness to make big changes.

Four years out from the 2016-17 season, just six players remain that played for that Avalanche team and one of them is Tyson Jost, who played all of six games that season as an 18-year-old rookie. Only one of those five players is over 25 — 28-year-old captain Gabriel Landeskog. The Avalanche identified their core players and moved on from everyone else.

That included moving on from Matt Duchene, who had led the Avalanche in scoring the year they made the playoffs. In the 2016-17 season, Duchene was still productive, finishing second on the team in scoring, but he wanted out and Avalanche GM Joe Sakic obliged, trading him to the Ottawa Senators in a three-team deal that included the Nashville Predators for a significant return.

The Avalanche got a few players in the deal, including defenceman Samuel Girard, but also got draft picks that turned into blue-chip defenceman Bowen Byram and hopeful goaltender-of-the-future Justus Annunen. In addition, with the bevy of draft picks at his disposal, Sakic was able to move a second-round pick for Philipp Grubauer, who is still their number one goaltender.

At the time, Duchene looked like a key part of the Avalanche’s young core, his trade request notwithstanding. But he was also already 26, the oldest member of that group, and work on ageing curves in the NHL shows that players peak much younger than most people think. In other words, the odds were that Duchene wasn’t going to get much better, while the younger talent brought back in the trade likely would.

Most importantly, Sakic took his time with a Duchene deal, ensuring that he got a great return commensurate with Duchene’s value as a player. He did not bite on a simple deal — think the one-for-one deal of Taylor Hall for Adam Larsson that Peter Chiarelli made in Edmonton — but orchestrated a three-team deal that brought back multiple quality assets, including both players and picks.

The lesson for the Canucks is that they can’t be afraid to trade a key player, but it has to be the right deal for the right player. The Avalanche didn’t move their younger stars, MacKinnon and Rantanen, and they became the backbone of the franchise, but they were willing to trade Duchene.

That means the Canucks shouldn’t be afraid to trade the 25-year-old Bo Horvat and certainly shouldn’t shy away from moving the 27-year-old J.T. Miller, assuming the right deal can be made that brings back significant value for the Canucks.

Just trading around the edges — players on expiring contracts like Tanner Pearson and Brandon Sutter — won’t move the needle. The Avalanche changed the trajectory of their franchise and set themselves up for years of success with the Duchene trade.

Sakic also made other trades, most significantly moving defenceman Tyson Barrie to the Toronto Maple Leafs for centre Nazem Kadri in the 2019 offseason. That was a proactive move to trade from a position of strength — their defence — to fix an area of weakness on their second line.

They similarly acquired Brandon Saad this past offseason from the Chicago Blackhawks for Nikita Zadorov, making room for younger defencemen while simultaneously adding a top-six winger. It helped that the Avalanche had space under the cap to add Saad thanks to their prudent cap management.

This could be tougher for the Canucks — years of trading away draft picks instead of stockpiling them haven’t given them many positions of strength — but there’s a lesson here in being agile in the trade market to address roster needs. Also, there’s a lesson in managing the cap to make such moves possible.

Getting younger and avoiding long-term deals for veterans

The Avalanche also got significantly younger. Only four players over 30 have played a game for the Avalanche this season and one of them is Ian Cole, who they traded near the start of the season to the Minnesota Wild. The other three are Erik Johnson, Matt Calvert, and Pierre-Édouard Bellemare. Of those three, only Johnson is signed beyond this current season.

There’s also Braden Holtby, signed to a two-year deal worth $4.3 million per year when he was already 31 and coming off the worst season of his career.

If the Canucks can get out from under a couple of those contracts for players who are 30+, that would help.

Supplementing the core from the draft

Then there’s the draft. The Avalanche got most of their top players from the first round of the draft, including MacKinnon, Rantanen, Byram, and Landeskog. They haven’t drafted particularly well outside of the first round, to be honest.

The Canucks are similar. Their best young players — Elias Pettersson, Quinn Hughes, Brock Boeser, and Bo Horvat — were all first round picks. Second-round picks Thatcher Demko and Nils Höglander are angling for a spot in that young core as well. Regrettably, two other first-round picks haven’t been as impactful. Olli Juolevi could still be part of the Canucks’ future, but it’s looking more and more like Jake Virtanen won’t be.

The key, however, is continuing to add young talent through the draft in the coming years to supplement the team’s young core.

The Avalanche were, of course, fortunate enough to draft Cale Makar fourth overall with the lottery pick they got from their dreadful 2016-17 season. He made a huge impact in his rookie year last season.

The Canucks obviously don’t have a Cale Makar waiting in their prospect pool — they have their Makar comparable already on the team in Quinn Hughes — but they could hope that Jack Rathbone could become their version of Samuel Girard, a second-pairing, puck-moving defenceman that anchors the second power play unit.

The Avalanche continued to add in subsequent years, most notably Bowen Byram, who is already playing significant minutes just over a year after being drafted. Alex Newhook also looks like a future star as he dominates college hockey. Having two first-round picks in the 2019 draft was huge for the Avalanche.

Do the Canucks have the same caliber of prospects that could make some noise in the future? The most important is Vasily Podkolzin, plus one would expect that they’ll be adding another high draft pick at the conclusion of the current season. Making the right pick will be key to taking the next step forward.

Who should be making these moves?

The biggest question, of course, is who is going to make all these moves for the Canucks. The Avalanche stuck with Sakic, but the young executive seemed to make some significant changes to his approach and seemed to learn quickly from his first few years on the job.

Is Jim Benning the right GM to handle the complexity of trading a key young player from the Canucks’ core? Is he able to change his approach to free agency that has seen him throw money and term at veterans who are past their prime? Can he be agile in the trade market to address the team’s needs?

And, if not Benning, then who?