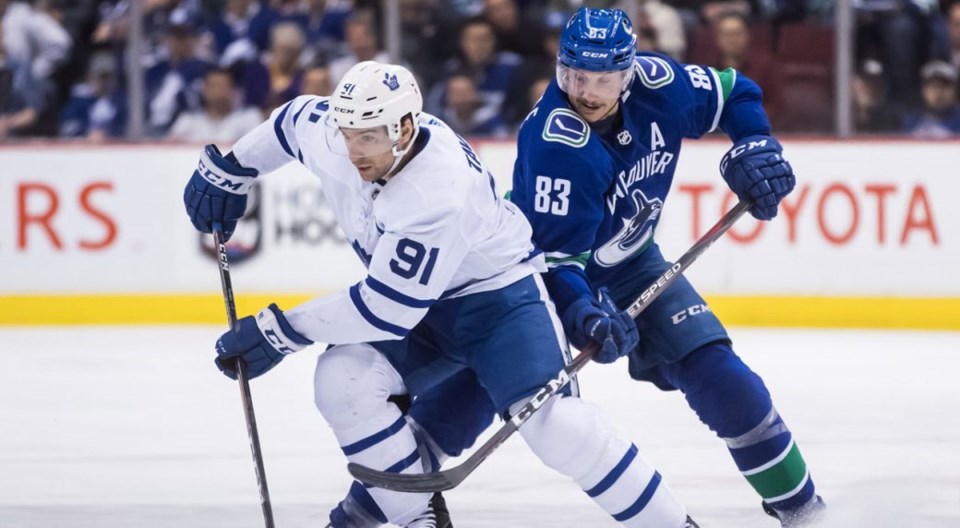 The Vancouver Canucks' Jay Beagle moves to check John Tavares of the Toronto Maple Leafs. The Canucks and Leafs could play in the same division in the 2020-21 season. photo: Darryl Dyck, CP

While teams around the NHL prepare for next season with free agent signings and trades, it’s still up in the air when next season will happen and what it will look like.

At the 2020 NHL Entry Draft, NHL commissioner Gary Bettman announced a plan to start the 2020-21 season on January 1st, making it more of a 2021 season. Previously, however, Bettman had made it very clear that they would need to be “flexible and agile” to deal with changing circumstances, so even that January 1st start date is tentative.

One of the major complications of restarting the season is the closed border between the US and Canada, with no clear sign of when the border will re-open. Since the NHL is a true two-country league, that makes for some daunting logistics that other leagues don’t have to deal with.

MLS is similar to the NHL in having multiple Canadian teams, if only three compared to the NHL’s seven. When they resumed their season after the COVID shutdown, the Vancouver Whitecaps, Toronto FC, and Montreal Impact stayed in Canada, playing a revised Canadian Championship tournament. After that, the three Canadian teams moved to “neutral sites” in the US for their remaining home games, with the Whitecaps playing in Portland.

That brief all-Canadian portion of the MLS schedule provides a potential solution for the NHL: an all-Canadian division. It’s an idea that’s been floated by a number of people, but on Wednesday a source directly connected to the NHL suggested it as a real possibility: Bill Foley, the owner of the Vegas Golden Knights.

Foley was on KSHP Radio in Las Vegas for a lengthy interview with Brian Blessing on the Vegas Hockey Hotline. He was asked about losing Nate Schmidt to the Canucks, a player who Foley was clearly heartbroken to see leave town.

“It really troubled me that we had to trade Schmidtty,” said Foley. “He’s a really great guy, he’s a great teammate, the guys all like him.”

Then he dropped a bombshell as a seeming aside. When talking about the possibility of facing a highly-motivated Schmidt with the Canucks in the future, Foley suggested that might not happen any time soon.

“Yeah, but they’re going to play in the Canadian division next year,” said Foley.

He said it at about the 21:40 mark of the below video, in an almost joking manner, but he seemed to be quite serious.

The NHL was unwilling to confirm any aspect of what Foley was saying — it appears to simply be his opinion of what will happen — but as an NHL owner, his words have weight. He’s one of the major players shaping the decisions that get made behind the scenes.

If the border is still closed by January and the NHL is adamant about beginning the season, what other option would they have? The NHL could create four makeshift divisions and start the season with intra-division play, in hopes of the border opening up later in the season to accommodate games between Canadian and US teams.

The other alternative — relocating seven Canadian teams — simply wouldn’t work, partly because of the logistics of finding homes for that many teams, but primarily because of the financial considerations. The NHL is a gate-driven league and they need fans in arenas in some capacity. Foley touched on that issue as well.

An All-Canadian division seems reasonable enough — the league already has one seven-team division — and it’s not entirely without precedent. Certainly, there’s never been a fully Canadian division, but when the Canucks first joined the NHL they were thrown into the East Division — an absurdity for the extremely west coast Vancouver — with the only other Canadian teams at the time, the Toronto Maple Leafs and Montreal Canadiens.

From 1982 to 1991, the Canucks played in the Smythe Division, which came just short of being entirely Canadian. The other Canadian members of the division were the Edmonton Oilers, Calgary Flames, and Winnipeg Jets, with only the Los Angeles Kings the odd ones out.

An All-Canadian division would certainly be fun for the fans, who frequently fight it out online over which Canadian team is the best and most likely to bring the Stanley Cup back to Canada.

Foley’s suggestion of an All-Canadian division also jibes with a recent report from Elliotte Friedman in his 31 Thoughts column about the AHL.

“This depends on what happens with the border, but there is talk that Canadian-based NHL teams with U.S.-based AHL affiliates are considering moving them north of the 49th for the 2020–21 season,” said Friedman. That obviously affects the Canucks, whose affiliate is in Utica, but also the Calgary Flames and Edmonton Oilers, whose AHL affiliates are in Stockton and Bakersfield, respectively.

“It makes sense,” he continued, “because a quarantine period would mean you can’t call up players. Not sure if those teams would be based out of the NHL buildings or centralized, but it is something these three organizations must prepare for.”

For the Canucks, that means relocating the Comets from their fervent fans in New York and likely placing the team somewhere in Ontario. As much as fans might like to see the Canucks’ affiliate play in Abbotsford or at the Pacific Coliseum, the team would still need to avoid air travel as much as possible and would need to stay in close proximity to division rivals like the Belleville Senators, Toronto Marlies, and Laval Rocket.

Of course, it’s completely unknown if an AHL season will even occur. Their original plan was to start the season on December 4th, but that plan is out the window. Since the AHL depends on players from the NHL, their schedule will have to coincide with theirs. What makes the AHL season more tenuous is that it’s an even more gate-driven league than the NHL — with no large television deal, the AHL heavily depends on ticket sales and in-game purchases.

“[Bettman’s] talking about January 1st, I don’t know. Maybe February 1st, maybe an abbreviated season and an accelerated season,” he said, then later speculated, “Let’s say it’s a 56-game season. Whatever happens, they have to finish the playoffs by the end of June because the Olympics are in July and NBC has the Olympics. We’ve got to be done with our season and all the playoffs sometime around the end of June.”

That goes against what Bettman has said in the past about wanting a full 82-game season, but, in his own words, the NHL has to be “flexible and agile.” If the season isn’t starting until January, perhaps in February, then an 82-game season isn’t in the cards, especially if the season and playoffs need to end before the start of the rescheduled Olympics in July, as Foley suggests.

So, in Foley’s view, the 2020-21 season will be shortened and compressed, feature an all-Canadian division, and have fans in arenas in some capacity — hopefully greater than 10% capacity, to be specific. Does that sound doable for the NHL? After pulling off the playoffs without a single positive COVID-19 test, it’s hard to bet against the NHL making the regular season work as well.