For the low, low price of a third-round pick in 2022, the Canucks solved their top-four problem.

On Thanksgiving Day, the Canucks gave their fans something to be thankful for: a top-four defenceman.

The Canucks knew they needed to upgrade their defence this offseason. Over the past week, seemingly every plan they had to do so fell through: they couldn’t complete a trade for Oliver Ekman-Larsson, couldn’t convince Tyson Barrie to sign in Vancouver, evidently lost Troy Stecher while trying to acquire Barrie, and circled back on Chris Tanev only to see him sign with their division rival, the Calgary Flames.

As each of their plans fell through, there was some understandable concern that the Canucks might run out of plans and wind up settling for whichever free agent defenceman was still available.

Instead, the pursuit of Alex Pietrangelo by the Vegas Golden Knights opened up a golden opportunity for the Canucks. Needing to shed salary, the Golden Knights were willing to trade Nate Schmidt to the Canucks for a third-round pick in 2022.

In Thanksgiving terms, the Canucks overcooked the turkey, burnt the stuffing, made lumpy mashed potatoes, ran out of gravy, and brought up politics at the dinner table — but then brought it all home at the end with a perfectly-baked pumpkin pie.

In a vacuum, this is a spectacular trade. The Canucks get a top-four defenceman for a low price, one that won’t even be paid for another two years. Schmidt is a legitimate upgrade on Tanev: he’s two years younger and capable of putting up 30+ points while playing shutdown minutes against tough competition.

Digging a little deeper, there are some causes for concern, but this is still a solid win for Jim Benning and the Canucks.

Acquiring Schmidt for just a third-round draft pick may seem ridiculously cheap, but it’s not out of line with other cap dump trades of good players over the past week. Ryan Murray, a defensive defenceman in the vein of Tanev, was traded to the New Jersey Devils for a fifth-round pick because the Columbus Blue Jackets needed to clear salary. The Golden Knights sent Paul Stastny to the Winnipeg Jets for a fourth-round pick and a depth defenceman.

Heck, Tyler Johnson, a play-driving centre who regularly puts up 20+ goals, was put on waivers by the Tampa Bay Lightning and went unclaimed. It’s just the reality of the flat cap: teams have limited cap space to work with and are willing to take a bath to clear room to make other deals.

While it hurts to help a division rival out of a jam, someone was going to trade for Schmidt and the Canucks had a big need on the right side of their defence. Schmidt is a left-handed shot, but has played the past three seasons on the right side for Vegas with Brayden McNabb. While Canucks head coach Travis Green prefers to play defencemen on their strong side, he’ll have little choice but to play Schmidt on the right, and he’s very good on his off-side.

That could mean pairing Quinn Hughes with Schmidt for a dynamic offensive line or putting him together with Alex Edler for a shutdown pairing.

Schmidt and McNabb were regularly used in a match-up role against first lines and took the bulk of the defensive zone starts for the Golden Knights. Schmidt was the puck-mover of the pair, transitioning the puck up ice with both his skating and his passing. He’s a strong skater and makes quick decisions with the puck, which helped the Golden Knights spend as little time as possible in their own end of the ice when facing the opponents’ best forwards. 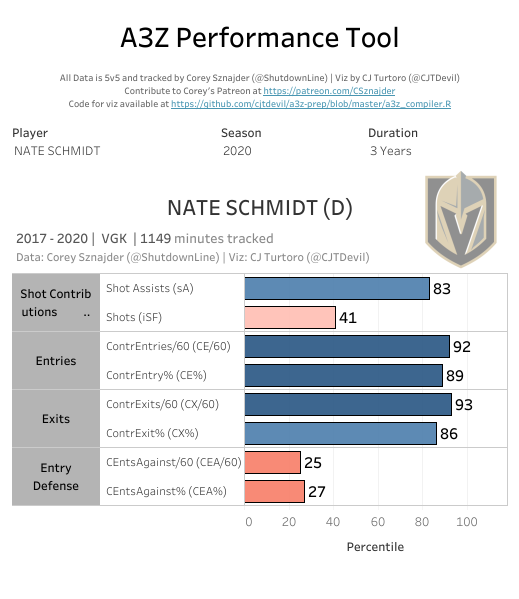 In other words, Schmidt is excellent at moving out of the defensive zone with and into the offensive zone with possession of the puck: in fact, he’s better than over 90% of other NHL defenceman at that skill.

Once inside the offensive zone, Schmidt sets up more shots than he takes, which should make new teammates like Elias Pettersson and Brock Boeser happy.

It also illustrates one of his main weaknesses: defending his own blue line. Opponents tend to be able to gain entry to the offensive zone with possession of the puck with ease on Schmidt’s side of the ice, which might have something to do with him playing on his off-side.

Schmidt’s in-zone defence is quite good, however, with strong positioning, good reads, and quick acceleration to get to the right spot on the ice to win pucks and start the transition. That strong in-zone defence is reflected in his solid penalty killing, something the Canucks will need with Tanev gone. 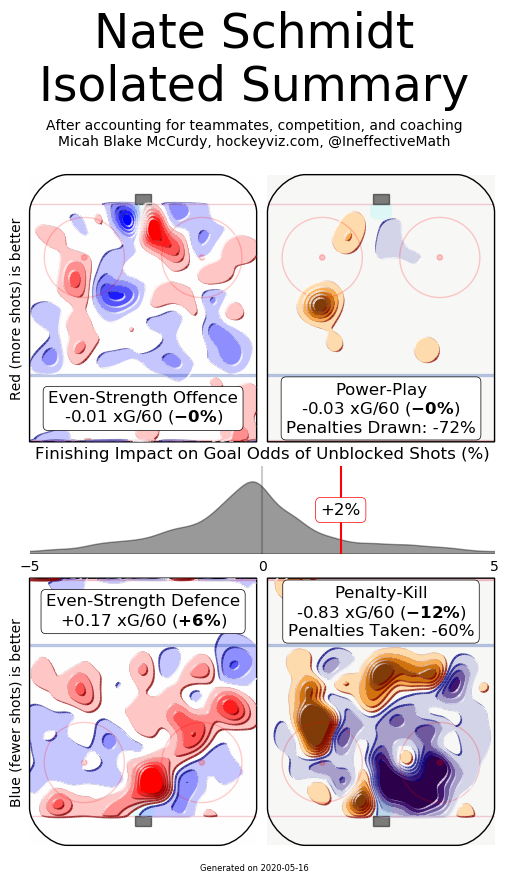 The model isn’t as high on Schmidt’s defensive game at 5-on-5 and rates him merely average offensively, though he has a discernable impact on finishing thanks to his excellent passing. Schmidt has been more highly-rated by this model for his defensive game in the past: the Canucks can hope for a return to form in that department and that it's not a sign of decline.

All told, Schmidt is a solid pick-up and immediately becomes the Canucks’ second-best defenceman. The one remaining concern is the cost. No, not the cost of the trade, which was perfectly reasonable, but the cost of Schmidt’s contract and how it fits into the Canucks’ cap picture.

Schmidt has a $5.95 million cap hit for five more seasons, expiring when he’s 33. This weekend, I estimated the Canucks’ available cap space, after re-signing Adam Gaudette and Jake Virtanen, at around $6.5 million. With Schmidt added, that cap space narrows to around $505,000 for a 22-man roster, one player short of the usual 23.

That doesn’t leave any room for adding a top-six forward, a distinct need for the Canucks, and that number could get a lot tighter if Virtanen gets a more significant reward in arbitration than expected. It definitely doesn’t leave room for adding another defenceman, meaning the Canucks would either need to lean on a rookie like Brogan Rafferty or Jalen Chatfield, or rely on Jordie Benn to play on the right side of the third pairing.

In other words, the Canucks likely still need to make a move to clear some space, something they’ve thus far been unable to do. This very trade illustrates why it’s been so hard for Benning to find takers for one of the Canucks’ bottom-six forwards with a bad contract: if teams can acquire good, useful players as cap dumps for a bargain basement price, why would they bother acquiring someone like Loui Eriksson?

There is another option: if Virtanen goes to arbitration, the Canucks will have another buyout window and could make room by buying out Brandon Sutter or Sven Baertschi to give themselves a little more breathing room. Ironically, that would give the Canucks an incentive not to negotiate a contract with Virtanen prior to arbitration.

Overall, Schmidt is a solid and necessary addition to the roster, even if he was the backup to the backup plan for the Canucks. In fact, he’s arguably the best option of all: he carries a lesser cap hit than Ekman-Larsson, is more reliable defensively than Barrie, and is a better puck-mover than Tanev.

Assuming the Canucks can sort out their cap crunch and fill the hole on the wing of their top-six, they’ve taken a solid step towards actually improving for next season.