The Vancouver Canucks had 12 restricted free agents to re-sign this off-season. Now they have just seven, as they chose not to issue qualifying offers to five players on Monday.

A qualifying offer is generally just a formality. By qualifying a restricted free agent’s contract, a team declares that they intend to re-sign the player and thus retain his negotiating rights. A player can accept his qualifying offer but more often rejects it and negotiates a new contract.

Guillaume Brisebois, who played just one game for the Canucks last season, also got a qualifying offer. The 24-year-old defenceman will likely play big minutes for the Canucks next season, albeit the Abbotsford Canucks. He could get more opportunities to play in Vancouver in case of injury, particularly with the closer proximity of their AHL team.

Finally, Lukas Jasek got a qualifying offer from the Canucks, which is interesting as he has already signed with the Lahti Pelicans in the Finnish Liiga next season. The 23-year-old forward has spent the last three seasons with the Utica Comets in the AHL, playing on both the wing and at centre.

Despite some solid play for Utica, including 23 points in 28 games last season, Jasek had yet to get called up to the NHL. By tendering a qualifying offer, the Canucks will retain Jasek’s rights should he choose to return to North America in a future season.

The Canucks chose not to qualify five players, who will now become unrestricted free agents and can sign with any team.

There are few surprises here. Originally signed as an undrafted free agent defenceman out of the OHL, Mitch Eliot had struggled at the AHL level. Jake Kielly, an undrafted free agent goaltender out of the NCAA, showed little sign of becoming even an AHL starter. And former sixth-round pick Petrus Palmu had a fairly significant falling out with the Canucks organization after limited icetime and communication in the AHL back in 2018 and returned to Finland

Two players who played for the Canucks this past season also went unqualified.

Jayce Hawryluk’s contract was not qualified after 5 points in 30 games for the Canucks. The 25-year-old winger was decent enough defensively in a limited role, but didn’t pay off the offensive potential he showed last season when he had 7 points in 11 games with the Ottawa Senators.

Hawryluk could have made sense as a cheap depth forward for the Canucks next season — his qualifying offer would have been for just $840,000 — but the Canucks are evidently moving in a different direction.

It’s not the first time Hawryluk has gone unqualified either. He was only an unrestricted free agent last year because the Senators chose not to qualify his contract.

The final player left unqualified is Marc Michaelis, who played 15 games for the Canucks this season and tallied no points. It was a disappointing NHL debut for Michaelis, who was coming off 20 goals and 44 points in 31 games as a senior in the NCAA.

Michaelis simply looked out of his depth at the NHL level and, at 25 years old, doesn’t have a lot of runway remaining to get up to speed. He’s got some pace to his game and playmaking ability, so we’ll see if another team takes a chance on him in free agency.

Here are the required amounts for each of the Canucks’ qualifying offers via CapFriendly, including those they didn’t sign. 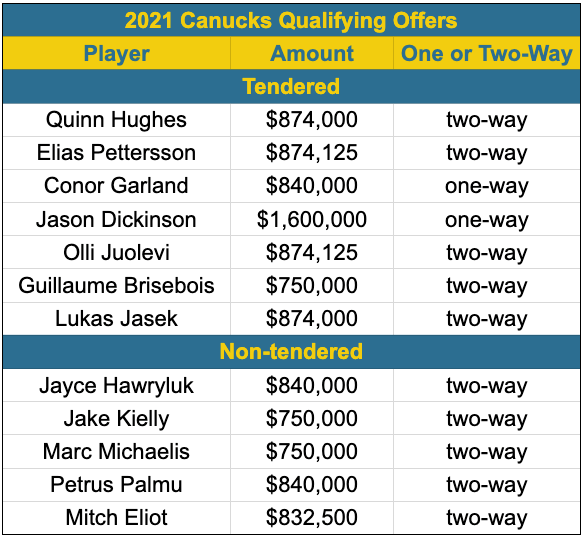 These amounts are dependent on the previous contract of each player. Again, restricted free agents are not required to sign their qualifying offer — most will not.

The Canucks will be the first visitors to Seattle for Kraken’s home opener next season
Jul 21, 2021 6:48 PM
Comments