Jim Benning: Ekman-Larsson “is going to be our number one defenceman”

"He’ll be a top-pairing guy, can play a lot of minutes, PP, PK, can be a match-up guy playing against the other team’s top lines."

Oliver Ekman-Larsson arguably should have won the Norris Trophy as the NHL’s best defenceman back in 2016.

The Swedish defenceman was dominant that season, piling up 21 goals and 55 points in 75 games to lead the Coyotes in scoring, but it was more than that. He had his best year defensively and was a nightmare for opposing forecheckers in transition, evading pressure and rushing the puck up ice.

He somehow finished ninth in Norris voting, likely a result of playing for a lousy Coyotes team that missed the playoffs. He deserved better.

That was five years ago. In the years since, Ekman-Larsson hasn’t played up to that same level. In fact, his game has been on a steady decline over the last few years and struggled the most last season.

Vancouver Canucks general manager Jim Benning clearly doesn’t think the last couple of seasons are reflective of who Ekman-Larsson will be in the future. That’s why he traded the Canucks’ 9th-overall pick to the Arizona Coyotes for him and Connor Garland.

“We think he’s going to be our number one defenceman,” said Benning in a call with the media after the trade.

"Quinn will be better for us acquiring Ekman-Larsson."

That’s quite the statement considering Quinn Hughes is already the Canucks’ number one defenceman, but Benning believes that the acquisition of Ekman-Larsson can only help Hughes.

“Quinn will be better for us acquiring Ekman-Larsson, because he can play now in a different kind of role,” said Benning. “He doesn’t have to play against the other team’s top lines and stuff. So, I just think it puts everybody in their place where they should be playing and it makes our team better.”

“He’ll be a top-pairing guy, can play a lot of minutes, PP, PK, can be a match-up guy playing against the other team’s top lines,” said Benning.

Here’s the issue: Ekman-Larsson wasn’t even a top-pairing defenceman last season for the Coyotes. His average ice time dropped to below 21 minutes per game for the first time since his rookie year as Jacob Chychrun and Alex Goligoski took over the top pairing in Arizona.

"He's competitive in his own end."

For a visual, here’s a heatmap of where on the ice opposition shot attempts came from when Ekman-Larsson was on the ice at 5-on-5 for the Coyotes. The red areas are where opponents had an above-average rate of shots. 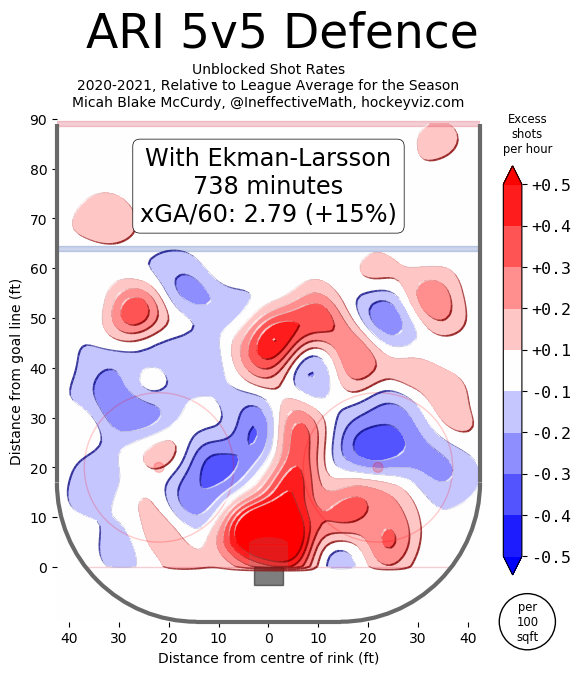 Oliver Ekman-Larsson's 2020-21 defensive heatmap at 5-on-5 via HockeyViz.com

That’s a lot of red in front of the net because Ekman-Larsson struggled immensely to prevent dangerous scoring chances last season.

It’s not just last season, either. This has been an ongoing trend for Ekman-Larsson over the past five years. If you’re counting on Ekman-Larsson to play the tough match-up minutes so that Hughes can thrive in easier minutes, you need to have an answer for why he was unable to play those minutes for the Coyotes.

Benning didn’t have one. When asked what he saw in Ekman-Larsson that made him believe he could return to form with the Canucks, Benning never really answered the question.

“He’s a smart two-way player, right,” said Benning. “He’s a guy who can carry the puck up ice, he’s got a great shot from the blue line, but he’s competitive in his own end. We’re excited to get him because he plays against the best players in the league.”

Again, last season he didn’t play against the best players in the league. He matched up against top forward lines at a below league-average rate. And, in those minutes, he struggled defensively. Expecting him to play in a match-up role and be better defensively is immensely risky.

While plus/minus isn’t the most reliable statistic, Benning’s response when asked about Ekman-Larsson’s plus/minus in recent years was still troubling.

“I don’t exactly know why his plus/minus wasn’t good the last couple years,” said Benning, “but I expect it to be better with us going forward.”

The larger issue isn’t next year, of course. It’s entirely possible that Ekman-Larsson, in a new environment, could bounce back a little next season. The trouble is that Ekman-Larsson is signed through 2027 and will carry a $7.25 million cap hit after the Coyotes retained 12% of his contract in the trade.

“He’s still 30 years old, so I think he’s gonna have another five, six good years left in him,” said Benning.

That’s a concerning statement because the truth is that most 30-year-old defencemen don’t have many good years left. Work done on aging curves shows that both forwards and defencemen peak around the age of 24, contrary to the traditional belief that defencemen take a longer time to develop.

24 also happens to be the age when Ekman-Larsson had his best season.

The odds are that Ekman-Larsson, who has been cratered defensively over the last few years, is going to get even worse over the remaining six years of his contract. Instead of seeing Ekman-Larsson's age as a potential red flag, Benning's statement that "he's still 30 years old" suggests that he still sees him as a relatively young player.