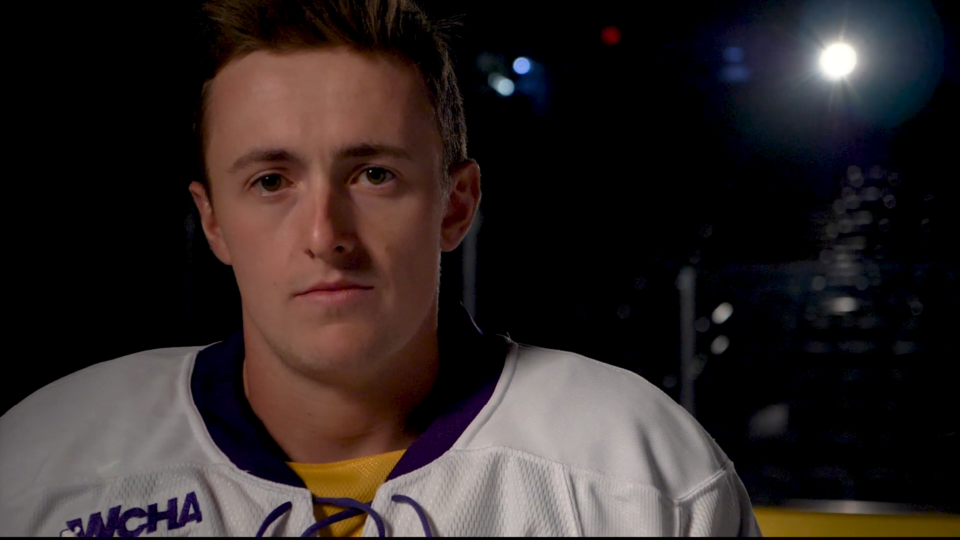 The Canucks have signed several Hobey Baker finalists over the last four years.

Quinn Hughes was a top-ten finalist for the award last year after an impressive freshman season. Thatcher Demko came third in voting in 2016 before signing with the Canucks. They even have a Hobey Baker winner in Adam Gaudette, who won the award in 2018 after leading the NCAA in goals and points as a junior.

The Hobey Baker is awarded annually to the top player in college hockey and Michaelis has a strong case. He led the Mankato Mavericks in scoring with 20 goals and 44 points in 31 games, good for third in college hockey and second in points-per-game, behind only Vegas Golden Knights prospect Jack Dugan.

The difference for Michaelis is that he’s also a strong defensive centre, with a mature two-way game. He was a key penalty killer for the Mavericks, and tied for the most shorthanded goals in the nation with three. He’s described as a complete player, matching high-end skill with hard-working defensive play.

“He's got good skill, he's got real good vision of the ice,” said Jim Benning on a conference call. “He makes players that he plays with better.”

That seems to be the consensus: he improves everyone around him. Part of that is his skillset as a centre, but part of it is his leadership ability. He’s been the captain at Minnesota State for the past two seasons, leading them to the top of the table in each of the last two seasons.

“I call him a playmaking center-iceman,” said Benning “I feel we’ve got some guys on the wing that can shoot the puck, but when you watch him play, he's the guy that can carry the puck through the neutral zone and he's got good vision of the ice and can set his wingers up for scoring chances because of his vision.

“The other part to his game is his attention to detail is very good. We think that with our group moving forward when he's ready to play like he'll be a penalty killer for us too because he's good defensively. He's always on the right side of the puck. He's a smart two-way player that plays a 200-foot game.”

That’s key for the Canucks, who need versatile centres in their system. Outside of their players in the NHL, the Canucks might as well have no centres after trading Tyler Madden to the Los Angeles Kings in the Tyler Toffoli deal.

The Canucks have Tyler Graovac in the AHL on an expiring contract and some big question marks in Linus Karlsson and Carson Focht, and that’s pretty much it at centre.

“We don't have a lot of depth at the center ice position,” conceded Benning. “We feel like [Michaelis] could be a player that can play up and down the lineup and has good utility.”

Michaelis immediately becomes the Canucks’ best prospect at centre, or at least the one closest to playing in the NHL.

The playmaking of Michaelis is particularly deadly on the power play, where he moves the puck quickly and with authority. For a demonstration, let’s look at two of his assists against Lake Superior. On the first, the Mavericks quickly capitalize on a turnover along the boards with some tic-tac-toe passing, but it's Michaelis’s one-touch pass to Dallas Gerads in front that provides the tap-in goal.

It’s that combination of great vision and the speed at which he turns that vision into a scoring chance that makes Michaelis dangerous. Later in the same game, he once again left the Lake Superior goaltender completely lost with a fantastic pass on the power play.

Michaelis first loops down from the point, going all the way behind the net to get the penalty kill moving. That opens up a lane through the middle that he takes advantage of with a sick cross-ice pass to fellow German national Parker Tuomie.

The two Mavericks have also been teammates with Germany at the World Junior Championship, while Michaelis has also represented Germany with the men’s team at two World Championship tournaments, tallying 5 points in 13 games.

Along with his playmaking ability, Michaelis has a strong shot, with a cracking one-timer on the power play and a quick release on his snap shot. To go with his other tools, he’s a strong skater, with good top-end speed and breakaway acceleration.

Michaelis has been a consistent point producer throughout his college career, while also showing consistent progression. He tallied 36 points in 39 games as a freshman in 2016-17, then 40 points in 36 games as a sophomore. He had 42 points in 42 games last season as a junior, then set a career high with 44 points as a senior.

When the NCAA season was cancelled, Michaelis was on-pace to become the highest scoring player in Mavericks history, at least since they joined Division I in 1996. Instead, he’ll remain in third, two points behind 90’s Mavericks Tyler Deis and Aaron Fox.

In fact, Michaelis could probably lay claim to being the best player in Mavericks history if not for David Backes, who played three seasons at Minnesota State. The numbers for Backes and Michaelis are eerily similar.

Obviously, there are some distinct differences between Backes and Michaelis that mean Michaelis is unlikely to have a similar NHL career, but it is amusing to note that they were just one point apart in their career numbers heading into their senior years, with identical points as sophomores and juniors.

One big difference is that Backes is 6’3” and 216 lbs. Michaelis is not. At 5’11” and 187 lbs, Michaelis is below average in height and weight for the NHL, though there are obviously plenty of players that thrive at that size. Being bigger doesn’t hurt, though.

Then there’s the other big difference: Michaelis is already 24 and will be 25 at the start of next season. Michaelis was two years older than Backes when they were putting up near identical points. Those extra couple years of development make a big difference.

This isn’t to draw a direct comparison between Backes and Michaelis, but more to point out that racking up points in the NCAA in your early 20’s is very different from doing so as a 19-year-old freshman.

As another point of comparison, Will Lockwood, who also signed with the Canucks on Thursday, also just completed his senior year. He’s three years younger than Michaelis.

In other words, it’s worth adjusting your expectations. Michaelis was a star in the NCAA, but might not be more than a top-six AHL forward in professional hockey. What might determine his NHL future is his attention to detail away from the puck and ability to kill penalties, moreso than his impressive point totals in college hockey.

At the very least, Michaelis should provide an upgrade at centre for the Utica Comets next season, which should be a benefit to the Canucks’ winger prospects.