Canucks sign 2016 third-round pick Will Lockwood, a speedy winger from the NCAA 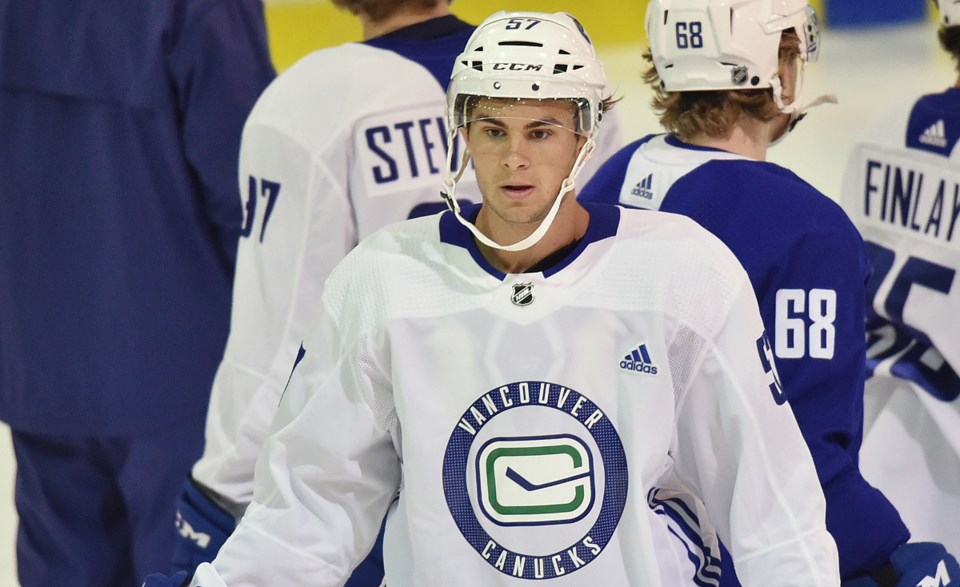 While the action on the ice has come to an abrupt halt for NHL teams, the action off the ice continues apace.

In fact, the COVID-19 pandemic has sped up some of the off-ice work for NHL general managers. Case in point, the NCAA cancelled all remaining hockey tournaments and championships last week, suddenly ending the season. That meant many athletes were suddenly available to be signed by NHL teams.

That included Will Lockwood, the Canucks’ third-round pick from the 2016 NHL Entry Draft. He and his University of Michigan teammates went on a fantastic 7-2-1 run late in the season, culminating in two shutout wins over Michigan State in the Big Ten quarterfinals. They went into the Big Ten semifinal with hopes of qualifying for the Frozen Four tournament.

Instead, the season was over, with the players left to ponder what could have been.

For Wolverines captain Lockwood, he was also left to ponder his future and, one week later, he solidified his plans. He signed a two-year, entry-level contract with the Vancouver Canucks.

“Will is a hard-working, two-way winger with natural scoring ability,” said Jim Benning in a press release. “He plays with urgency and creates chances for himself and his teammates. We look forward to adding his speed and tenacity to our roster.”

The 2016 draft has thus far been a disappointing one for the Canucks, with zero NHL games played from the six players picked, including fifth-overall pick Olli Juolevi, the only player frrom the draft other than Lockwood still in the Canucks system. Lockwood will look to change that, with a speedy, two-way game that could be a fit in a bottom-six role.

That means Lockwood won’t have to wait for a vacancy in the Canucks’ top-six to get an opportunity, though there’s still a bit of a logjam in the team’s bottom-six. That’s only a concern, of course, if Lockwood is good enough to make the team.

Lockwood has had a tough history of shoulder injuries that have hindered his development to a certain extent since he was drafted. He had a solid start to his post-draft season with the Wolverines, leading the team in scoring early on, but then suffered a dislocated shoulder on a dangerous hit from behind into the boards.

.@bigten @B1GHockey If this isn't a textbook boarding penalty I don't know what is. Unacceptable there was no call. Protect the players pic.twitter.com/wT92mRKYRx

Lockwood tried to return to the lineup, but reinjured his shoulder two games later and missed another slate of games. He finished his freshman season with 20 points in 30 games and opted for shoulder surgery after the season.

In his sophomore season, Lockwood once again got off to a hot start, with 11 points in 16 games, earning a spot on Team USA’s World Junior roster. Unfortunately, Lockwood suffered another shoulder injury at the World Junior tournament, which again required surgery, ending his season.

Both injuries were to his left shoulder.

For Lockwood, priority number one for his junior year was just to survive the season, which he managed, playing in all 36 games for the Wolverines. Fortunately, he did more than survive — he thrived, putting up 16 goals and 31 points in 36 games, finishing second in team scoring to Quinn Hughes.

Lockwood was named captain of the Wolverines for his senior year, but he struggled to improve his point totals. While he again stayed healthy, Lockwood managed just 9 goals and 23 points in 33 games, a step down from his junior year. The Wolverines won games thanks to outstanding goaltending and a score-by-committee approach, rather than offensive output from their top players.

Still, the tools and intangibles that made the Canucks pick Lockwood in 2016 are still intact. Lockwood’s calling card is his fantastic speed, to go with a willingness to play a gritty, physical game that belies his 5’11”, 172 lbs frame.

There are questions that remain. Can Lockwood play a heavy-hitting game at his size, particularly with his injury history? Can his vision and hands keep up with his blazing speed? Does he have the hockey sense to play a responsible two-way game that will keep him in the lineup at an NHL level? Those are the questions that will determine his NHL future.

Lockwood certainly has the willingness to work, using his speed away from the puck on the backcheck and forecheck as much as he uses it skating through the neutral zone in transition. He engages in puck battles and frequently wins them. And, every now and then, he’ll pull off a slick deke or a fantastic pass, sometimes both on the same play.

Will Lockwood, inspired by Pettersson dekes, with an assist #Canucks pic.twitter.com/GAqWhnj0mJ

Watching him play, you can understand the comparisons to Jannik Hansen when he was drafted, though Hansen certainly had the edge in size and skill.

“In his draft year, [Lockwood’s] character stood out for us, in his willingness to, for maybe not being a really big player, to stick his nose in there, work hard, get to the net, play physical, his energy that he brings,” said Benning on a conference call on Thursday.

The Canucks see Lockwood as a top-nine forward — “at worst, a fourth-line energy guy,” said Benning — and they could certainly use some cost-controlled wingers in the near future.

Expectations should be kept in check for Lockwood. Compare him to fellow Michigan alumnus Tyler Motte. At the age of 19, Motte had 31 points in 35 NCAA games, the same number of points Lockwood had as a 20 year old in the 2018-18 season.

The big difference between Motte and Lockwood is that Motte had a breakout season the following year, scoring 32 goals and 56 points in 38 games as a 20 year old.

Keep in mind the type of player that Motte has become at the NHL level — a useful role player on the fourth line that provides speed and energy, along with some penalty killing. If you’re expecting more than that from Lockwood, who was less successful than Motte at the college level, your expectations are likely too high.

Lockwood will be 22 at the start of next season and should be expected to start in the AHL with the Utica Comets.

The Farmhouse: Kole Lind’s resurgence as the most dynamic young playmaker in the Canucks system
Jan 22, 2020 11:07 AM
Comments
We welcome your feedback and encourage you to share your thoughts on this story. We ask that you be respectful of others and their points of view, refrain from personal attacks and stay on topic. To learn about our commenting policies and how we moderate, please read our Community Guidelines.