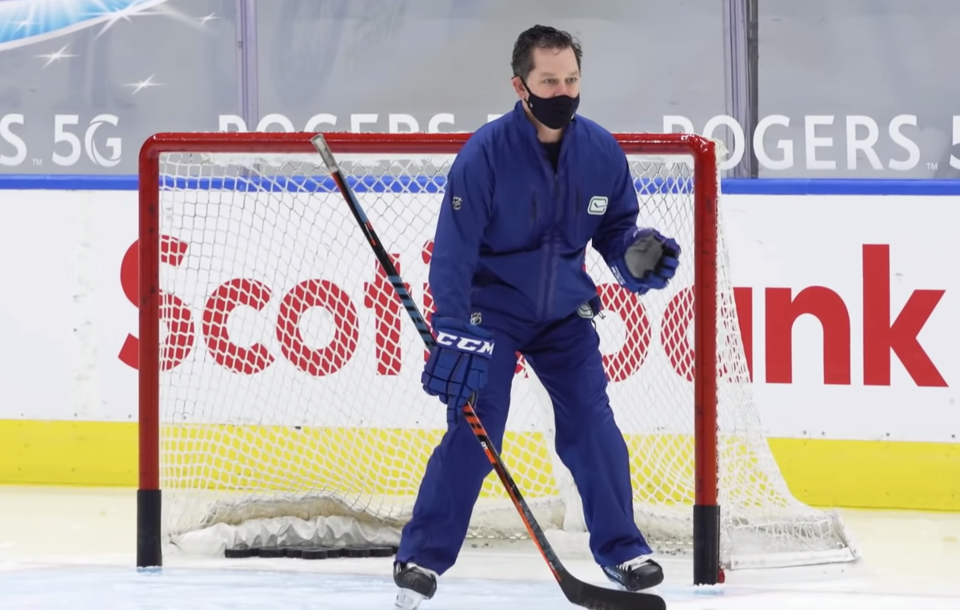 Ian Clark will return as goaltending coach for the Vancouver Canucks next season after signing a contract extension this week.Canucks

The Vancouver Canucks announced some changes to their coaching staff on Wednesday, but the much bigger news was the lack of change: Ian Clark was signed to a contract extension and will return as the Canucks’ goaltending coach next season.

“Clarkie is unbelievable. I owe probably just about everything to him. I don’t speak too much about him in the media,” said Demko. “Obviously, I’m putting in the work, but the way he’s guided me and mentored me, it’s been amazing.

“I desperately hope that they can figure something out and have him return.”

That desperation evidently paid off, as the Canucks and Clark figured something out. Clark’s contract extension is reportedly for five years, the same length as Demko’s new contract.

That’s significant considering head coach Travis Green only got two years on his contract extension. While goaltending coaches are, to a certain extent, in their own world compared to the rest of the coaching staff, Clark certainly had the leverage to ask for job security given how late these contract extensions were completed.

“Clarkie is one of the best — or the best goalie coach in the league,” said Braden Holtby. “I think when you have something good, you don’t let it go.”

Newell Brown will not return as power play coach

Several other members of the coaching staff also got contract extensions: assistant coaches Nolan Baumgartner and Jason King, as well as video coach Darryl Seward, will all return next season.

A notable absence among those extensions is power play coach Newell Brown, who will be parting ways with the Canucks.

“On behalf of our entire team, I want to thank Newell Brown for his commitment and dedication over the past four years,” said Green. “We wish Newell and his family the very best and future success."

This was Brown’s second stint as an assistant coach in Vancouver. He helped the Canucks to have the best power play in the league back in the 2010-11 season, but the Canucks’ power play has been middle of the pack over the four years of his second stint and was 25th in the NHL at 17.4% this past season.

Taking Brown’s place behind the bench is Brad Shaw, who was just let go as an assistant coach with the Columbus Blue Jackets.

Shaw won’t necessarily take Brown’s role as power play coach, however, as the former NHL defenceman has primarily been known for working with his fellow defencemen and on the penalty kill. He’s particularly known for developing young defencemen, such as Seth Jones and Zach Werenski with the Blue Jackets, and helping them with the defensive details of their game.

"He was one of the best defensive coaches that I ever had," said former NHL defenceman Mike Weaver, who played under Shaw with the St. Louis Blues. "He's a brilliant mind in the game."

Shaw has also coached the penalty kill, which is common for defensive coaches in the NHL.

Coaching defence and the penalty kill has been the role of Baumgartner with the Canucks over the past four seasons. With Baumgartner also returning, it’s unclear who will be responsible for what role and who will take over Brown’s role coaching the power play.

Baumgartner was a more offensive-minded defenceman in his playing days and, in his one full season in the NHL, quarterbacked the Canucks’ top power play unit and had 22 power play points. Perhaps he could take over that role.

The Canucks also made a couple of other coaching changes.

Chris Higgins will no longer be a skills coach for the Canucks, but will move back into his previous player development role.

The Canucks also added Kyle Gustafson as an assistant/special assignment coach. Gustafson comes from the WHL’s Portland Winterhawks, where he has worked for 18 years as an assistant coach, associate coach, and most recently assistant general manager.

Gustafsson got into coaching at a young age — he was just 21 when the Junior B team he had been playing for a year earlier suddenly lost their head coach to another job and he was hired to replace him. The young Gustafsson led the Eugene Thunder to their first and only NPHL championship that season, then the team unfortunately ran out of money and ceased operations.

Perhaps it was a sign that they were low on funds that they hired a 21-year-old head coach in the first place.

From there, Gustafsson joined the Winterhawks as an assistant coach at just 22. The Winterhawks won one WHL championship in 2013 while Gustafson was assistant coach, making it to the Memorial Cup final before losing to a Halifax Mooseheads team led by Nathan MacKinnon and Jonathan Drouin.

It’s unclear exactly what role Gustafsson will play as a “special assignment coach” for the Canucks. It’s a role that only a few other teams have had.

Scott Stevens was also a special assignment coach with the New Jersey Devils before he became a full-fledged assistant coach.