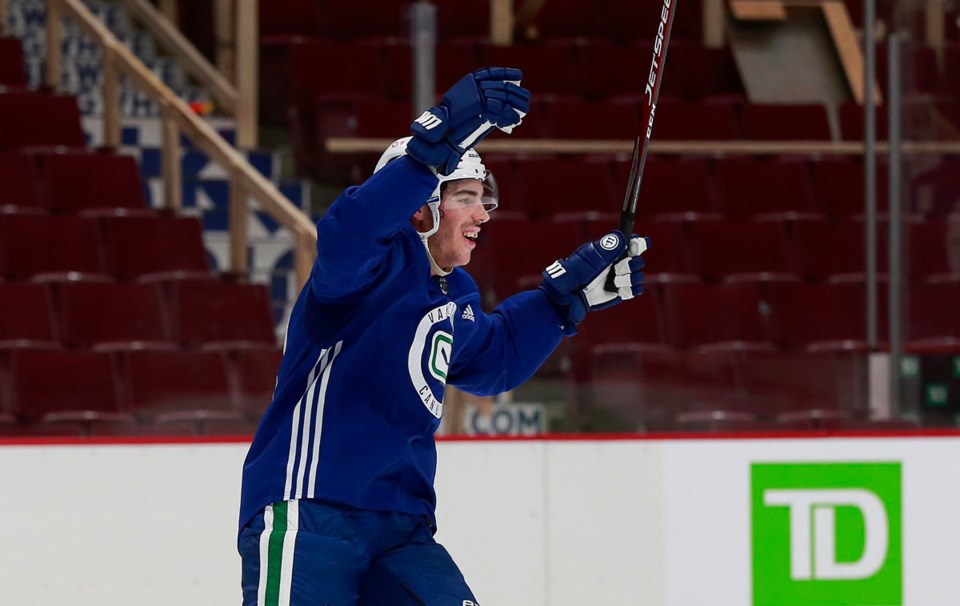 So many things went wrong for the Vancouver Canucks this season that it’s easy to lose track of them all. Between Tyler Toffoli scoring 8 goals in 8 games on the Canucks, multiple blown leads and losing streaks, the team’s franchise forward only playing half the season, and a massive COVID-19 outbreak, there’s at least one thing on which everyone involved with the Canucks can agree: this year has been awful.

“It’s been a really good year for me and my family,” said Travis Hamonic after Thursday’s game.

It may seem a little like Eric Idle bursting into song in Monty Python’s Life of Brian, but Hamonic was full of positivity and optimism despite all of the struggles of the season.

"I broke my ribs early on"

It was an odd season for Hamonic in particular, who didn’t join the Canucks at training camp until mere days before the start of the season. He was a late addition to the roster and couldn’t even officially sign until after Micheal Ferland went on long-term injured reserve after rosters were initially submitted for the season.

Between an injury the previous season and his decision to opt out of the 2020 playoff bubble, Hamonic hadn’t played a game in nearly a year when the season started.

“I got hurt and then the season paused the night I was supposed to play my first game back in the lineup in Calgary,” said Hamonic about last season. “Then obviously I didn't play in the summertime, and then I missed training camp, and basically practiced once and then jumped into the lineup.

“When I look back on it, you're obviously eager, you want to play, you want to chip in, but it was probably pretty quick on my behalf to jump in the lineup.”

It didn’t take long before another injury took him out of action again, as he missed a month. Ultimately, that time helped him settle in and he looked much better once he returned.

“I broke my ribs early on and I think I had a lot of time to get on the ice and practice and really just get more familiar, I think, A. with our systems and B. with my teammates,” said Hamonic. “I think I'm someone that is at the top of their game when they're very familiar with their teammates, where you can be vocal both on and off the ice of what's expected from you.”

Despite all of that — starting the season after just one practice, struggling early, and breaking his ribs — Hamonic has been happy with his experience in Vancouver.

“Have I enjoyed myself? Yeah. As a team, we've probably not — not probably — obviously we haven't had the success that we've wanted this season,” he said.”But when I take a look at myself personally and how much I've enjoyed playing the game this year surrounded by this group of guys and especially under Greener — he's a really good coach, in my opinion, and he's let me have a role and I've been able to run with it.”

It also helps that it’s a plum role, playing alongside one of the most exciting young defencemen in the league in Quinn Hughes. The two of them have gradually improved their chemistry together as the season has progressed.

“Playing with Huggy...It's made my job certainly a lot easier to kind of find your voice, find your role and enjoy playing,” said Hamonic.

"That's just the nature of life"

The 30-year-old Hamonic has also found himself in a leadership role with the team’s younger players, though he says it’s a two-way street.

“I think that the skill level of these guys coming in, it's pretty extraordinary,” he said. “As much as you're trying to help them, little tips here and there, I think those guys kind of help an older player like me with some of their skill work as well.”

As many other people just hitting 30 can attest, time flies quickly.

“It's fun! You see Bonesy (Jack Rathbone) come in, score his first and Lindy (Kole Lind) a couple games ago, you get to see his first game,” he said. “It's kind of crazy when you start looking back on your career and it doesn't feel like it was that long ago that you were one of those young guys coming in and having those experiences.

“That's just the nature of life, not necessarily your hockey career but life, you know. Things change and you try to help these young kids along the way.”

"We enjoy playing for each other"

According to Hamonic, his teammates have made what might otherwise be a dreadful season thoroughly enjoyable.

The most important aspect of Hamonic’s happiness, however, has come off the ice.

“On a personal level, my wife and our two kids have really enjoyed Vancouver,” he said. “Everybody has been extremely welcoming and we have nothing but amazing things, so we'll let things kind of play out as they do, but it's been a really good year for me and my family in this city, in Vancouver and wearing that jersey.”

As for things playing out, Hamonic doesn’t have a contract for next season. He was signed to a one-year, $1.25 million deal that allowed the Canucks to fit him under the salary cap and allowed him to stay in Western Canada, where he wanted to be for family reasons. Given the way he and his family have enjoyed Vancouver, he may be willing to once again play for a little below his value on the open market.

IWTG: Canucks fall apart in the second period, Rathbone makes debut, and Shorthouse outs himself as a Swiftie
May 5, 2021 1:49 AM