How low can the Canucks go? 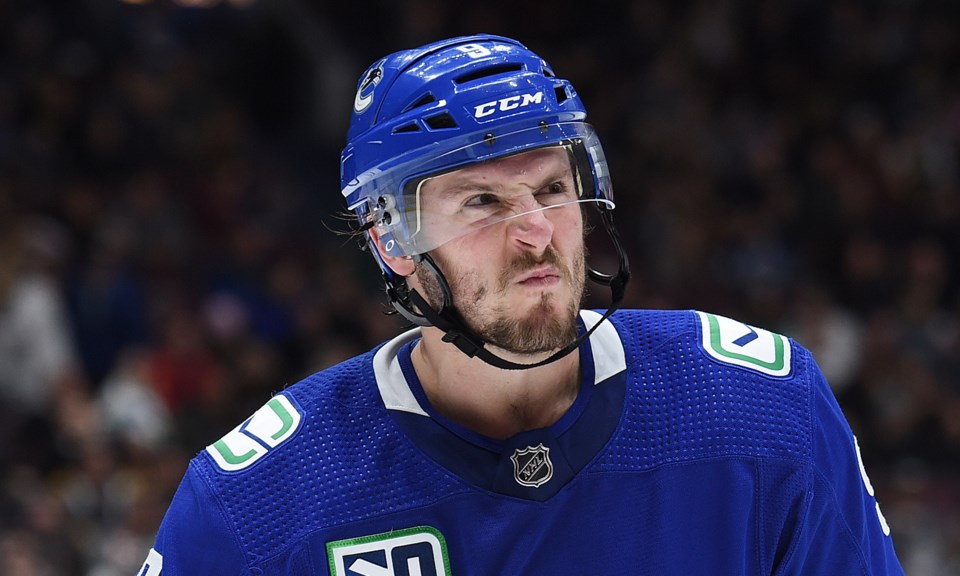 J.T. Miller and the Vancouver Canucks could fall as far as 30th in the NHL. photo: Dan Toulgoet

The Vancouver Canucks can’t quite finish in last place, but they could come very, very close.

It’s been a brutal season for the Canucks. Right from the start of the season, things went sideways. They lost five of their first seven games, then went on a six-game losing streak to start February.

In March, they lost their franchise forward Elias Pettersson to what turned out to be a season-ending injury. Still, they started to put some wins together and things were looking up when suddenly they got hit by the worst COVID-19 outbreak in North American sports.

After a couple of emotional wins over the Toronto Maple Leafs after returning to the ice, the Canucks have now lost six straight games. As a result, they’ve fallen even further down the standings. Already last in the all-Canadian North Division in points, they’re now last place in points percentage too, behind the Ottawa Senators. By points, they’re 29th in the NHL, ahead of just the Anaheim Ducks and Buffalo Sabres. 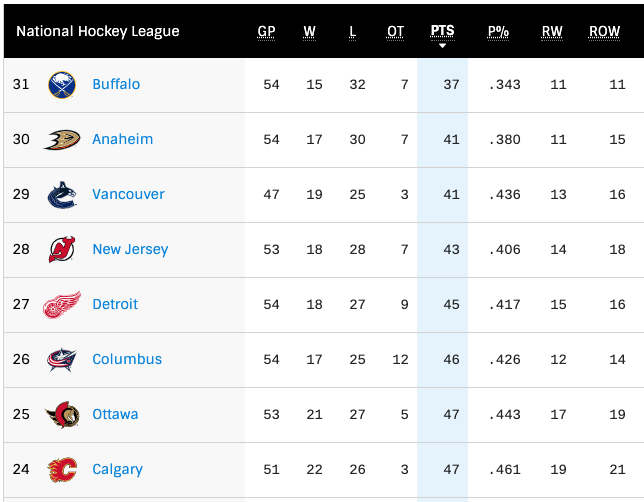 The Canucks do have more games left than any other team. Technically, if they win all nine of their remaining games and the Montreal Canadiens don’t win any of their four remaining games, the Canucks could catch the Canadiens and make the playoffs. Believing that’s going to happen is like Homer Simpson declaring his roast pig is “still good” as it hurtles over the horizon.

“It’s gone,” said Bart Simpson and he’s right. The more interesting question at this point is how far down the standings can the Canucks fall?

The lowest possible finish for the Canucks

It turns out they can fall very far indeed, but not quite all the way to the bottom.

If the Canucks lost all nine of their remaining games — a 15-game losing streak that would tie for the third-worst in NHL history — they’ll finish the season with 41 points. The Sabres, currently at 37 points, have two games remaining. If they win both of those, the Sabres will also have 41 points.

If the Sabres win both games in regulation, they would even match the Canucks when it comes to the first tie-breaker, as they’d both have 13 regulation wins this season. The second tie-breaker is regulation and overtime wins combined, which is where the Canucks would prevail and finish in 30th place ahead of the Sabres.

Since it would require a near-historic losing streak, this is obviously an unlikely scenario. All it would take is Thatcher Demko or Braden Holtby shutting the door for a game or two and the team’s top-six or power play chipping in offence to put together a few wins.

Last in the North

Can the Canucks catch the Senators for sixth place in the North Division?

They would need to win at least three of their last nine games and take at least one more to overtime to have a chance at catching the Senators, who are currently six points up and have the advantage in terms of tie-breakers. If the Senators lose out, the Canucks would need seven points to pass them.

The Senators are hot, however, with seven wins in their last nine games. Counting on them to lose all three of their remaining games seems foolish. If they win even two more games, the Canucks will need to win at least 11 points to catch them.

At this point, however, it seems likely the Canucks will finish last place in the North.

Time for the tank

The Canucks are playing for pride at this point but the further they fall down the standings, the higher they’ll pick in the 2021 NHL Entry Draft.

The Canucks are unlikely to finish low enough in the standings to have a greater than 10 percent chance at the first overall pick. With the Seattle Kraken added to the draft lottery and guaranteed to pick in the top five, the Canucks would need to finish 30th to ensure a top-five pick themselves.

That would mean finishing below the Anaheim Ducks, who are tied with the Canucks in points at 41 but only have two games remaining. Even if they win both of those games, any two wins by the Canucks in their remaining nine games would see them finish ahead of the Ducks.

The Canucks could still conceivably finish below the New Jersey Devils, Detroit Red Wings, and Columbus Blue Jackets, however. That would place them 29th in the NHL and give them a 9.5% chance at picking first overall, while guaranteeing at least a top-six pick.

If the Canucks continue on their current pace, however, they’ll finish 26th in the NHL, with a 6.5% chance at picking first overall. In that scenario, they will pick no lower than ninth overall.

It’s worth remembering at this point that if they had missed the playoffs last season — if they had even lost the play-in series with the Minnesota Wild — their likely top-ten pick would belong to the Tampa Bay Lightning as part of the J.T. Miller trade.