Elias Pettersson proves he can do everything — including play goalie (VIDEO)

Pettersson's list of talents keeps expanding, from juggling while on a unicycle to being an Instagram model.
Oct 26, 2020 10:49 AM By: Daniel Wagner 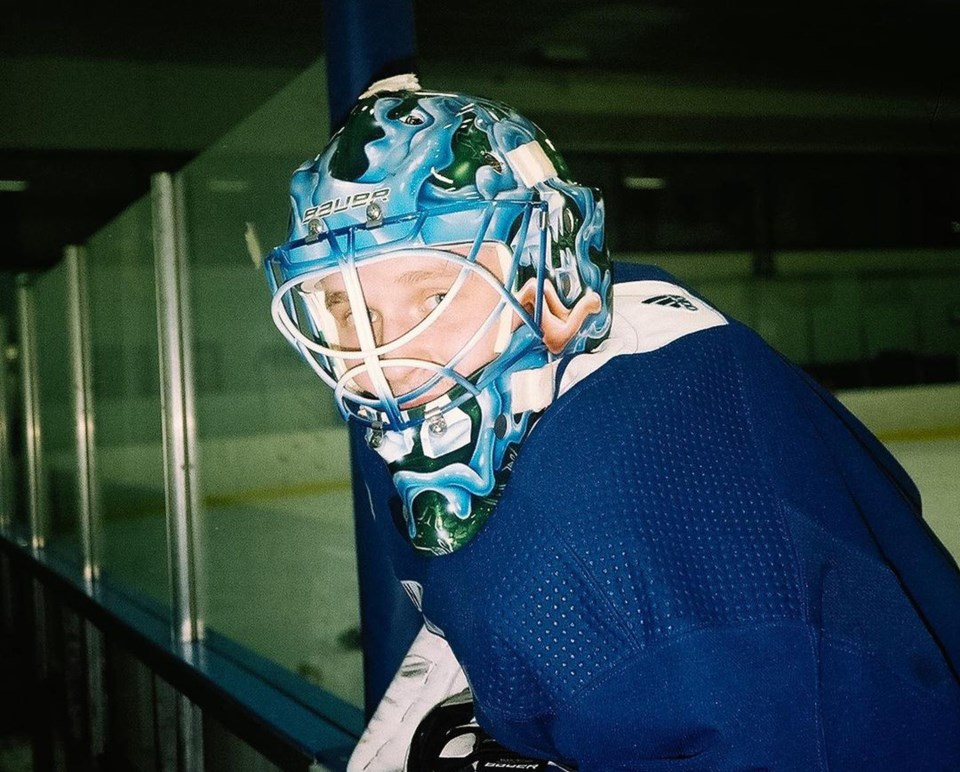 Is there anything Elias Pettersson can't do?

We already know that Pettersson is an elite NHL centre. He won the Calder Trophy as rookie of the year while setting franchise records in the process, then took the Canucks back to the playoffs in his sophomore season, leading the team in scoring in the postseason.

Beyond that, Pettersson has a bevy of hidden talents. He's an excellent golfer, whether he's out on the links or joking around with trick shots on his Instagram. He can juggle while on a unicycle, which is one of those niche talents that you expect from that one quirky guy on your college campus, not from one of the best hockey players in the world.

He's even taken some time this off-season to apparently become a model, rocking some killer looks for luxury streetwear brand Off-White Vancouver.

I believe the kids would call that "drip."

On Monday, Pettersson revealed yet another of his hidden talents, though this one was at least hockey-related.

He joined Olly Postanin and Jacob Ardown, which are definitely their real names and not wonderfully terrible puns, from On The Bench for a ridiculous video where he showed them that he can flash the leather nearly as well as he can dangle.

Let's break this down a little.

First off, Olly says the Canucks got knocked out in the first round of the playoffs this past season, which is inaccurate — they got knocked out in the second round. They cut to a quick death stare from Pettersson before moving on. To be fair, the On The Bench crew do advertise themselves as "Canada's most unreliable sports broadcast team," so they have to live up to the label.

After some very useful lessons on slap shots and one-timers for Pettersson — "These guys are idiots," he deadpans — he shows off his physical side, dummying Olly before drilling a one-timer top corner, washing the ice with a one-knee celebration before jumping into the boards. Then he launches Jacob's stick into the side netting in a subsequent battle in a moment that legitimately made me laugh out loud.

Honestly, the most fun aspect of the first half of the video is how game Pettersson is for all of the silliness. He keeps a straight face as much as possible, only losing it once at the 8:40 mark. He's game for anything.

Finally, halfway through we get to the good stuff.

"All right guys, listen. You guys suck, haven't taught me anything," says Pettersson, "I have a goalie here, my friend's coming. So, let's see if you guys can score."

Apparently, the On The Bench duo expected to see Thatcher Demko step onto the ice. Instead, it was Pettersson himself decked out in goalie gear, including a familiar-looking mask.

That would be Jacob Markstrom's mask, the one he used to start the 2019-20 season. It's a very distinct look, with a big, fleshy tongue coming out of the left side of the cage, so it's hard to miss. Let's be honest: Markstrom won't need any of his Canucks masks anymore.

"We're going to embarrass him and he's never going to play in the NHL again," says Olly about facing Petey the goalie. Of course, Pettersson actually does have some experience playing goalie, even if just as a kid. His older brother Emil used to put Elias in goalie gear so he could practice his shooting, and Elias spent some time with his Ånge IK youth team in net.

You can also tell that Pettersson has picked some things up from NHL goaltenders. His butterfly is clean, he tracks the puck well, eats up rebounds, and makes some flashy glove saves to top it off.

Of course, it helps that Olly and Jacob are terrible, though Jacob pulls off a pretty slick between-the-legs deke to the backhand to score at 14:50. But then Pettersson just goes full Dominik Hasek on Marian Gaborik to wipe him out.

What Canucks fans really want to see is Pettersson take off the goalie gear without tearing his groin or giving himself some sort of hip flexor injury. Not to worry: he escapes the video unscathed. At the very end, Pettersson reveals that this is far from the first time he's played goalie, and not just as a kid.

"It's been two or three years ago since the last time I was in net, but it was fun. I had a great time," said Pettersson before catching a glimpse of his red and sweaty face. "Holy crap, I look tired. I am tired."

Adam Gaudette on giving up 88, Twitch streaming, and wanting to be like Patrice Bergeron
Oct 20, 2020 4:53 PM
Comments