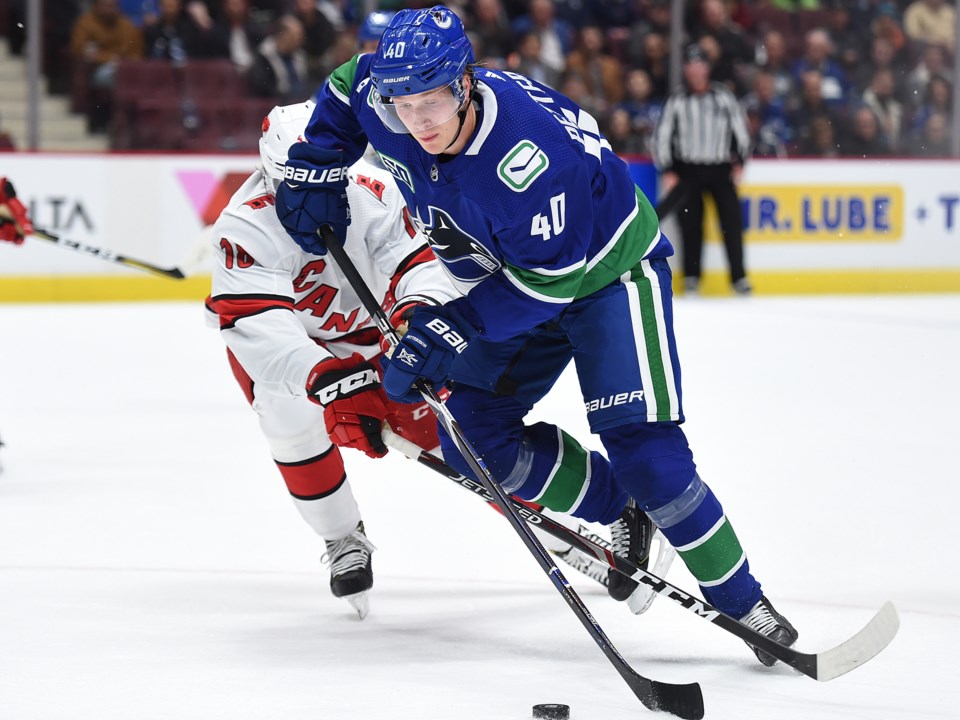 It was a random comment on a livestream of a preseason Canucks game, but the late Jason Botchford made it a catchphrase that captured the feelings of Canucks fans perfectly. In a tough 2018-19 season for the Canucks, there was one thing that made watching the games worthwhile: win or lose, then-rookie Elias Pettersson was going to do his dekes.

Pettersson has a seemingly bottomless bag of tricks out on the ice that make him one of the most entertaining players to watch in the entire NHL. He’s not just entertaining for Canucks fans, but anyone who appreciates creative and innovative hockey.

Even scouts for opposing teams can’t help but rave about him. In a recent article at Yahoo! Sports, Los Angeles Kings scout Blake Bolden couldn’t help but marvel at how Pettersson set up Tyler Toffoli for a goal in the playoffs.

“There was one play Pettersson made where he used his knee to slingshot around the goalie and make a pass to Toffoli and I was like, that was the coolest thing ever,” she said. “I never would have thought to use a knee, I’ve never done that before.”

That play, where Pettersson hooked his knee on the back of the goal to whip himself around the post faster than he could turn on his edges, is in this video put together by Dimitri Filipovic of the PDOcast. It’s basically an And1 mixtape, where streetballers would show off their ridiculous handles, except it’s hockey and Pettersson pulled off these moves in the sport’s best league.

Today is a good day for a mix of Elias Pettersson doing his dekes and breaking people's ankles pic.twitter.com/FG3Mjcqkcq

Stickhandling wizard Pavel Barber shared the video on his Instagram, where he has nearly 600,000 followers. Barber doesn't just make amazing hockey videos; he's also a skills coach, teaching stickhandling to players of all levels, including a few NHLers, such as the Canucks’ own Jake Virtanen a couple of years ago.

Barber compared Pettersson to his all-time favourite player, Pavel Datsyuk, so I reached out to him to talk about what makes Pettersson’s dekes so special. The first thing he pointed out was that it wasn’t just his stickhandles, but everything working in tandem.

“Pettersson has a Datsyukian ability to do very little and create tremendous amounts of distance between himself and the defender,” said Barber. “He is very good at deceiving defenders with his body language, but make no mistake, the body language and stickhandling go hand-in-hand. They supplement each other.”

You can see it in the second move on the mixtape: Pettersson momentarily opens up his body and his stick as if he’s about to pass the puck to the point and Ryan Strome buys it completely.

“He just swivels the hips, loads the pass, looks off the pass, and in one motion cancels it all, drawing it in as the defender slides with only one working ankle left,” said Barber. “That’s anticipation, trusting your move will work, and knowing what your fake will do to the opponent before it happens.

“He’s not waiting for the defender to go — he’s anticipating it.”

Pettersson’s magic hands make for an easy comparison to the Magic Man: Pavel Datsyuk. Barber isn’t the first to make the comparison — even Brock Boeser called Pettersson “mini-Pavel” at one point — and it’s not just his handles, but his commitment to the defensive side of the game that draws parallels. Still, it’s the stickhandling that sticks in the memory when you think of Datsyuk’s game.

“I'd say Petterson is the closest thing to Datsyuk for a lot of skills,” said Barber. “He even moves like him. He's creative and he can be in weird situations and find creative solutions. That was Datsyuk's style for sure. He's also very good on his cutback moves which creates a lot of distance.”

Barber was quick to note that no one, not even Pettersson, can completely encapsulate Datsyuk’s game — “It’s hard to fully replicate a god,” he joked — but said that Pettersson comes about as close as you can get.

The key is that creativity, where it seems like Pettersson is improvising on the spot based on whatever situation he faces, rather than just doing a series of rote moves. Barber suggested that the hockey culture in Sweden likely helped Pettersson develop that creativity.

“Like a lot of Swedes, you get to that level by coaches allowing you to try new things and not labelling you a fancy or showboat player for trying these things,” said Barber. “I was in Sweden last year and that was my biggest takeaway from their coaching style. Within reason, of course, they allow players to find creative solutions. They let them try new skills in practice and in games.”

Pettersson isn’t the only Canuck with a sweet set of hands, however. Barber did a video with the Canucks earlier this year alongside Bo Horvat, teaching some of those creative and fun skills to a local hockey team.

Barber challenged Horvat to pull off The Michigan, aka. The Svechnikov, aka. The Zorro Goal, aka. The Lacrosse Goal. It’s a goal that Canucks prospect Nils Höglander has mastered but Pettersson has yet to do during a game, even though he definitely wants to.

“It’s a move I feel I can do,” said Pettersson in the wake of Svechnikov’s eye-boggling feat. “I’ll probably try it next time I get a chance.”

Horvat did it first try, even though he apologized for not going top corner.

“I'm not surprised by Bo. I've known for a while how good his hands are,” said Barber. “I was certainly impressed, though. The thing you have to realize with players like Bo is that he's a gritty all-around player: a player who can get dirty in the corners and win battles, but also has that element of finesse and soft touch.”

That soft touch was certainly on display during the playoffs, scoring a couple of gorgeous goals with his go-to toe-drag move. An important element of the move is body language: Horvat momentarily opens up his body and stick as if he might attempt a shot or push the puck to the outside, then quickly drags the puck to his backhand.

“That fake shot, draw to backhand move — he uses it all the time,” said Barber. “He knows exactly how to manipulate the defender, and he knows that the key to selling it is to not oversell it. It's there, then it’s not. The puck doesn't stay back there long. He just gives the illusion he might, and the defender overcommits and he's earned a step and he's gone.”

That seems to be the common theme for Barber on combining skating, stickhandling, and body language into one move: anticipating how an opponent will react to a fake, trusting that they will react that way, and already be completing the move to get past that opponent or create enough space to open up a passing lane or a shooting lane. While Horvat depends on one main move, however, Pettersson has a seemingly endless well of creativity to draw from.

Hopefully, it won’t be too long until Canucks fans can once again watch Pettersson doing his dekes at Rogers Arena.

With the Canucks' cap crunch, Jake Virtanen might be their best option on the first line
Oct 23, 2020 2:50 PM
Comments
We welcome your feedback and encourage you to share your thoughts. We ask that you be respectful of others and their points of view, refrain from personal attacks and stay on topic. To learn about our commenting policies and how we moderate, please read our Community Guidelines.