In the midst of difficult chemotherapy and radiation treatments, Canucks fan Dave Noordam got a message of support from one of his favourite players.
Nov 18, 2020 10:22 AM By: Daniel Wagner 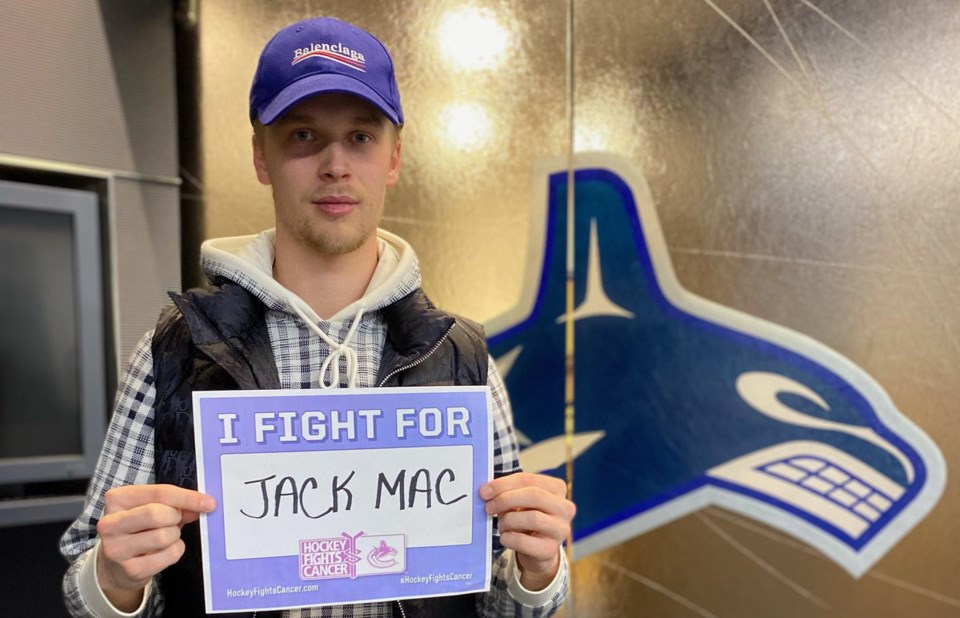 Nearly 1 in 2 Canadians will get diagnosed with cancer in their lifetime, according to a report from the Canadian Cancer Society. As a result, pretty much everyone has some sort of connection to this disease.

That connection hit home for the Vancouver Canucks this past July when Jack McIlhargey, a giant in the hockey community, died from cancer. McIlhargey played parts of four seasons as a hard-hitting, fist-chucking defenceman for the Canucks and was also an assistant coach with the Canucks for 14 seasons. He left behind a legacy of leadership and fast friendships in the hockey community thanks to his big heart, love for the game, and great sense of humour.

For the NHL, Hockey Fights Cancer is one of their most important initiatives, partnering with the American Cancer Society and Canadian Cancer Society to raise funds, share stories, and support those in the hockey community impacted by cancer. As they put it, "cancer has no off-season."

As part of their initiative this year, the NHL asked on social media, "Who is the face of your fight?" with each NHL team responding with support for people in their community who are battling cancer. The Canucks responded with a video from Elias Pettersson to support longtime Canucks fan Dave Noordam, who has been undergoing chemotherapy and radiation treatments for over a month.

.@DaveNoordam is the face of our fight.

Dave, the #Canucks stand in support of you and all those battling cancer. 💜 #HockeyFightsCancer pic.twitter.com/oCKRkQVIod

"We're all cheering for you in your battle against cancer," says Pettersson in the video. "I heard you're wearing one of my jerseys to your treatments. I'm going to send you another one so you can mix it up."

It was an emotional moment for Noordam to get that video message from his favourite player, sharing on Twitter, "This just made my year!!! I’m not crying, you’re crying."

Noordam was first diagnosed with a form of skin cancer in December and had surgery in March to have it removed. Then, in July, the cancer returned in his neck, requiring the removal of 78 lymph nodes in August, followed by an aggressive treatment that has left him weakened physically. In a recent update, Noordam shared that he lost his voice due to radiation and he has previously shared that he's ineligible for medical EI, causing financial stress.

"I know it’s almost impossible, but I will try to work through the cancer treatments," Noordam shared when he first found out he would need chemotherapy. "Please pray I have the strength and for me to find a way to support my family financially if I do have to miss an extended period of time and that I won’t lose my new job as a result."

In response, a fellow Canucks fan set up a GoFundMe to help support Noordam and his family so he can focus primarily on battling the disease. It has currently raised $11,578 of its $50,000 goal.

Throughout it all, Noordam has remained a positive and optimistic part of Canucks Twitter, lifting up the spirits of others even while facing difficult times himself. It's only right that Elias Pettersson was able to lift up his spirits in turn.

Elias Pettersson proves he can do everything — including play goalie (VIDEO)
Oct 26, 2020 10:49 AM
Comments