Elias Pettersson’s slump isn’t just bad luck, but he might be poised to break out

In his rookie season, Elias Pettersson came flying out of the gate with eight points in his first five games. As a sophomore, he was held off the scoresheet in the first two games, but quickly found his groove, putting up six points in his next four games, and he never went more than two games without a point.

With that in mind, it’s understandable that Canucks fans would be concerned about Pettersson to start the 2020-21 season.

Through eight games, Pettersson has just two points, a goal and an assist. He had a five-game pointless streak, the longest of his career. And, without their young superstar producing, the Canucks have stumbled to start the season, with a 3-5-0 record and a minus-12 goal differential.

Pettersson has looked off to start the season and he’s had trouble finding open ice whether with the puck or away from the puck. After the first few games of the season, Pettersson admitted that his confidence had suffered.

“I think I can do a lot of better stuff out there,” said Pettersson. “I think I’m maybe not playing with the best confidence right now and playing too stationary. I need to move my feet. I’m an easy target if I’m not moving my feet, so I’ve got to be better.”

It doesn’t seem like much has changed since. One moment on the power play on Monday against the Ottawa Senators seemed to exemplify his lack of confidence. With an open opportunity to shoot from inside the right faceoff circle, he instead tried to force a pass backdoor to Brock Boeser through traffic.

Canucks fans are so used to seeing Pettersson plant pucks just under the bar in similar situations that it was stunning to see him pass on such a golden opportunity.

It’s not just the lack of points that are concerning, however. A point drought can often be the result of bad luck or running into hot goaltenders, which can get in your head and shake your confidence. What’s really worrying are the numbers underlying Pettersson’s slump that suggest this isn’t just a run of bad luck. 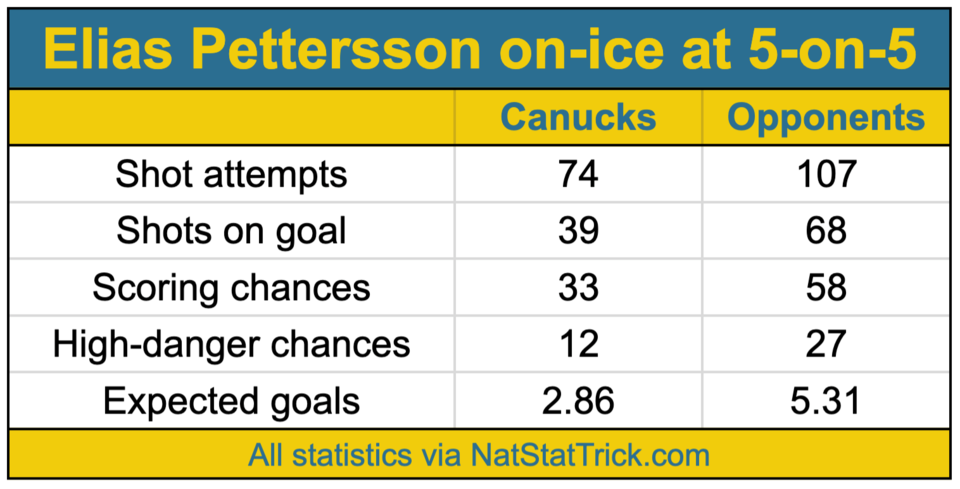 Elias Pettersson's 5-on-5 analytics as of January 27th, 2021 via NatStatTrick.com

Essentially, when Pettersson has been on the ice at 5-on-5, the Canucks have been out-shot and out-chanced, which is extremely unusual. His corsi percentage last season was 54.34%, as he and his linemates, J.T. Miller and Brock Boeser, were one of the best lines in hockey at not just out-scoring but out-possessing their opponents.

Even when Pettersson and his linemates didn’t put up points last season, they could at least be counted on to control play. This season, that hasn’t been the case.

Perhaps the absence of Miller for the first three games of the season could explain those troubling underlying numbers, but Miller has been even worse than Pettersson, dead last on the Canucks in corsi and expected goals percentage.

“Those can be a little bit misleading at times,” said Green. “[On Monday], they had the puck in the offensive zone in the first half of the game a bunch of times, were close to making connecting passes and pulling the trigger… It’s not like they were hemmed in their own zone the whole night, yet the analytics might say otherwise.”

In other words, Green is saying that Pettersson and his linemates have had more puck possession than shot-based metrics like corsi would suggest. What they’re missing is that final pass for a scoring chance or shot on goal —  once that clicks, according to Green, they’ll be fine.

“When I went back and watched their shifts, man, they were close to breaking through in the first period with two to three goals,” said Green. “I know the analytical side of the game is very important, I take a lot into that as well, but you've also got to still watch the game and see how those numbers came up. Were they hemmed in their zone, or were they just not connecting and shots weren't quite getting to the net.”

On Monday night, the Pettersson line wasn’t as badly out-shot as they have been in other games, but shot attempts were still 13-9 for the Senators when Pettersson was on the ice at 5-on-5. It’s not just about shots getting to the net — that line hasn’t even been getting shot attempts at times.

Still, Green’s point is well taken: especially as a coach, he can’t just look at shots and scoring chances, but how they were created and what might be done to create more scoring chances for your team and fewer against. In other words, you have to watch the game.

I re-watched all of Pettersson’s shifts from Monday night’s game and Green was right: the Pettersson line did hold possession in the offensive zone several times during the first half of the game and created some dangerous chances, only some of which resulted in a shot on goal.

This moment early in the first period is a prime example. After an extended shift in the offensive zone, Miller and Pettersson were aggressive on the forecheck to win the puck back, but Miller's pass to Boeser in the high slot is in his skates and what could have been a scoring chance from a dangerous area turns into nothing.

I also had a stopwatch in hand while rewatching his shifts. Overall, the puck was in the offensive zone for approximately 6:02 when Pettersson was on the ice at 5-on-5, which is nearly half of his 5-on-5 ice time that game. That wasn’t all with solid possession of the puck, but it was still in the offensive zone.

Conversely, the puck spent just 3:39 in the defensive zone when Pettersson was on the ice at 5-on-5.

From both the eye test and the numbers, what Green said appears to be true: the Pettersson line had the territorial advantage at 5-on-5, even if the shot totals didn’t reflect that. The shifts where they were stuck in the defensive zone mainly stood out because there was a highly noticeable negative outcome: a scoring chance, a goal, or a penalty.

That could be a positive sign that Pettersson and his linemates are finding their game. Canucks fans and media might be having a very different conversation right now if one or two of those offensive zone possessions had turned into a goal.

There’s a big difference between the Pettersson line struggling to make that last pass to create a scoring chance and struggling to push possession in the right direction. In soccer, it might be called executing in the final third of the field. If it’s not a puck possession issue, but an execution in the offensive zone issue, then that’s potentially something that can be ironed out.

That’s not to say it’s easy. Those “connecting passes” to create Grade-A scoring chances matter a lot, particularly when your line is relied upon to provide elite scoring. Pettersson and his linemates need to get their offensive zone game cleaned up in a hurry for the Canucks to avoid falling behind in the standings.

They’ll also have to prove that they can maintain that type of possession game against better teams than the Senators. The same stopwatch analysis of Pettersson’s shift from the previous two games against the Montreal Canadiens likely wouldn’t be as positive.

Still, Green believes in their ability to bounce back from this bad beginning to the season.

"I've got a lot of confidence in all three of those players," said Green."Yeah, they haven't scored a lot five-on-five and the power play, they only got the one last night, but again, the analytics might say it wasn't very good, but they couldn't get off the ice, they had the puck the whole time.

"They'll be fine is I guess where I'm going with this."