Hockey Night in Canada will broadcast in 7 additional languages, including Vietnamese, for their multilingual edition.
Apr 13, 2021 5:19 PM By: Daniel Wagner 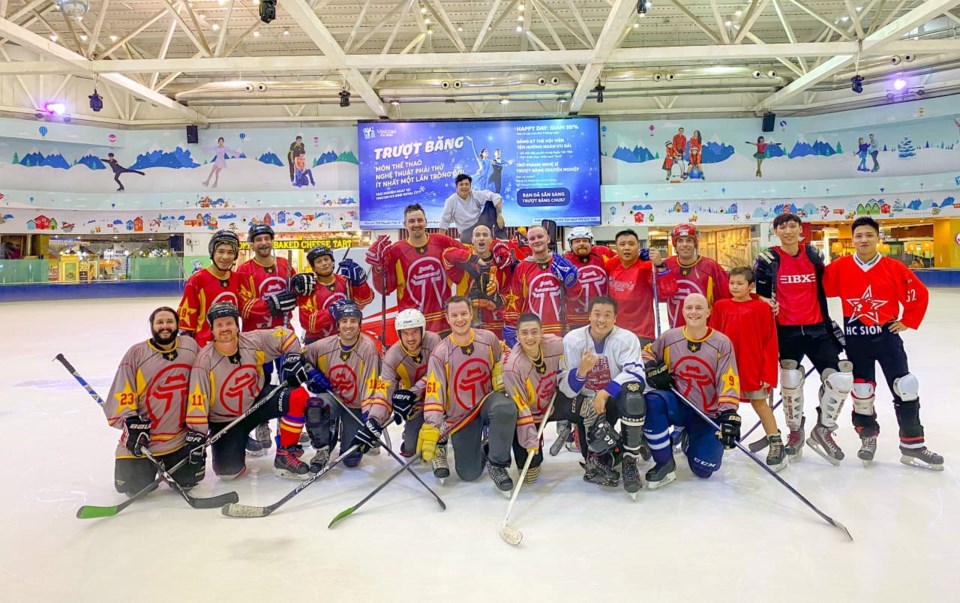 Hockey players in Hanoi gather together for a group photo.Nguyen Hoang Duy

UPDATE: Due to the changed schedule caused by the Canucks' COVID-19 outbreak, Hockey Night in Canada's Multilingual Edition has been rescheduled to Saturday, April 24.

The multilingual broadcast will stream the Toronto Maple Leafs vs Winnipeg Jets game at 4pm PST and Vancouver Canucks vs Ottawa Senators game at 7pm PST on the Sportsnet website.

Canada is a multilingual country, both officially and unofficially. The country has two official languages, English and French, but there are dozens of other languages spoken in Canada.

According to the 2016 census, 21.1% of the Canadian population speaks what is called an “immigrant language” at home, whether that’s Cantonese, Mandarin, Punjabi, Arabic, Tagalog, or many other languages. There are also over 200,000 people who speak an Aboriginal language at home, such as Cree, Inuktitut, or Ojibway.

Since hockey is the national winter sport of Canada, it’s fitting that Hockey Night in Canada has been slowly incorporating other languages into its broadcast.

While French language broadcasting has been taken over by TVA Sports, CBC now broadcasts games in Punjabi. Back in 2010, CBC broadcast a game in the Inuktitut language as part of Hockey Day in Canada, while 2019 saw the first NHL game broadcast in Plains Cree with Rogers Hometown Hockey.

This Saturday, Hockey Night in Canada will take a leap in language diversity when it broadcasts in seven different immigrant languages: Cantonese, Mandarin, Hindi, Vietnamese, Tagalog, German, and Arabic.

According to a press release from Sportsnet and Molson Canadian, who are sponsoring the initiative, the seven languages were chosen because they are “the most commonly spoken in each Canadian city with an associated NHL team and represent the mosaic of current and prospective hockey fans coast to coast.”

On April 17, the seven-language broadcast will stream on the Sportsnet website, including the Vancouver Canucks game against the Toronto Maple Leafs scheduled for 4pm PST.

One of the commentators for this project spent some time in B.C., which is where he was initially introduced to hockey. Nguyen Hoang Duy, who goes by Jimmy, will be part of the Vietnamese broadcast from his home in Hanoi using the virtual sportscasting studio Spalk, pronounced like the Star Trek character.

“The Hockey Night in Canada languages initiative came to me out of the blue,” said Jimmy. “My friend Marc Portell — who was one of the founders of the ice hockey movement in Hanoi — reached out to me and mentioned the commentary gig in Vietnamese. Needless to say, I agreed to it instantly.”

“I will cover a little bit of play-by-play, colour commentary, as well as some statistical analysis,” he added. “I have never been involved in a hockey broadcast before, so the pressure is definitely there, but also the honour of being a part of hockey's growth as a game globally.”

Jimmy’s first experience with hockey was as an intern with the Victoria Salmon Kings for the 2006-07 season through his Communications program at Camosun College. He would watch games from the press box, then deliver statistics to coaches and referees during intermissions at the end of the game. His knowledge of the game grew and he began to fall in love with hockey.

“The guys from school got me participating in my first fantasy hockey season the next year,” he said. “I took interest in the Calgary Flames since my first pick Jarome Iginla wound up scoring 50 goals and 98 points.”

Jimmy’s been a Flames fan ever since, though it’s difficult for him to keep up with games in Vietnam with the time difference.

“During weekdays, it is impossible with a full-time job,” he said. “The weekends are the only time I have to tune into the games, but everything has been out of whack since the coronavirus caused game cancellations and disrupted the season overall.”

While watching the games became more difficult when he returned to Vietnam, Jimmy has grown his love for hockey in another way: playing the game.

“I got involved in the summer of 2017 when I came across a Facebook group saying there is ice hockey in Hanoi,” said Jimmy. “We have been trying to grow the game one step at a time but the limited infrastructure means we can't get the exposure necessary for rapid growth.”

The hockey players in Hanoi face some significant obstacles. There’s just one ice rink in Hanoi and it’s located in the middle of a shopping mall that lacks safety netting to keep pucks from flying out of play.

“No casualties to date, other than a kid’s sundae getting destroyed,” joked Jimmy but the rink has many other issues.

Since it’s designed for beginner skaters, the boards feature padded cushions and a handlebar, which Jimmy lamented make it too hazardous for body checks. With no safety netting, they use knee-high nets to force players to shoot low, which means they don’t use goalies either.

“We use penguin skate aids in front of the net,” said Jimmy. “It takes away an important dimension of the game, essentially turning it into an indoor pond hockey game.”

The ice also isn’t the best quality. At times, ventilation pipes above the rink drip onto the ice, causing frozen mounds on the surface as high as four centimetres.

“The only zamboni the rink has should have been put out of commission several years ago,” said Jimmy. “After resurfacing the ice, there are still many patches that haven't been properly resurfaced. You could have a smooth skate for a while and then wipe out on one of these patches.” 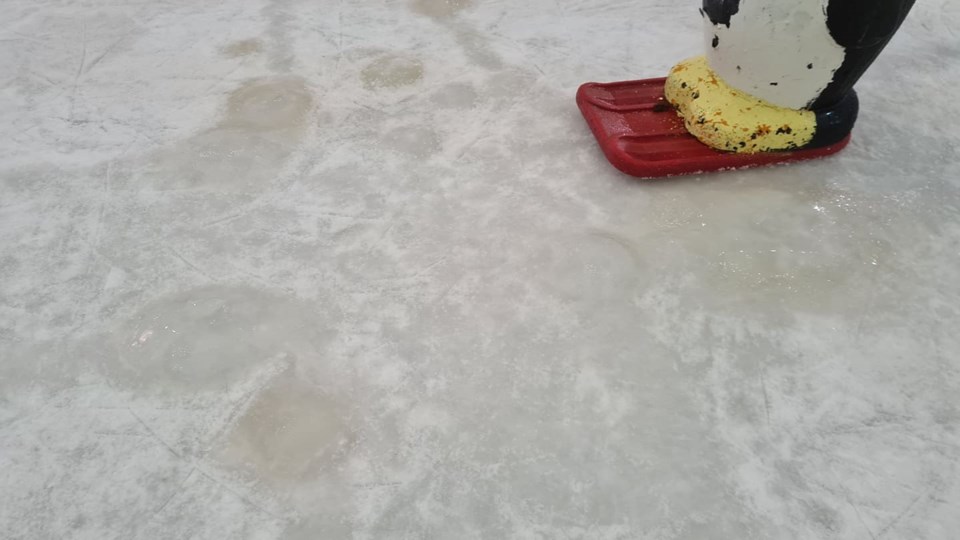 Some of the bumps and patches in the ice at the rink in Hanoi, as well as the feet of a penguin skate aid used as a goalie. By Nguyen Hoang Duy

Inexperienced staff can also be an issue.

“A month ago, we had a new kid on his third day on the job who had to resurface the ice. He had never driven a zamboni before and unfortunately crashed it into the boards, taking away two glass panels that still haven’t been replaced,” said Jimmy. “On the other side of the missing panel is a bakery shop.

“Staying true to the hockey spirit and culture, our resident hockey mom Erin went out and bought nets, which we take turns putting up before every game so nobody on the other side has to get maimed while eating bread.” 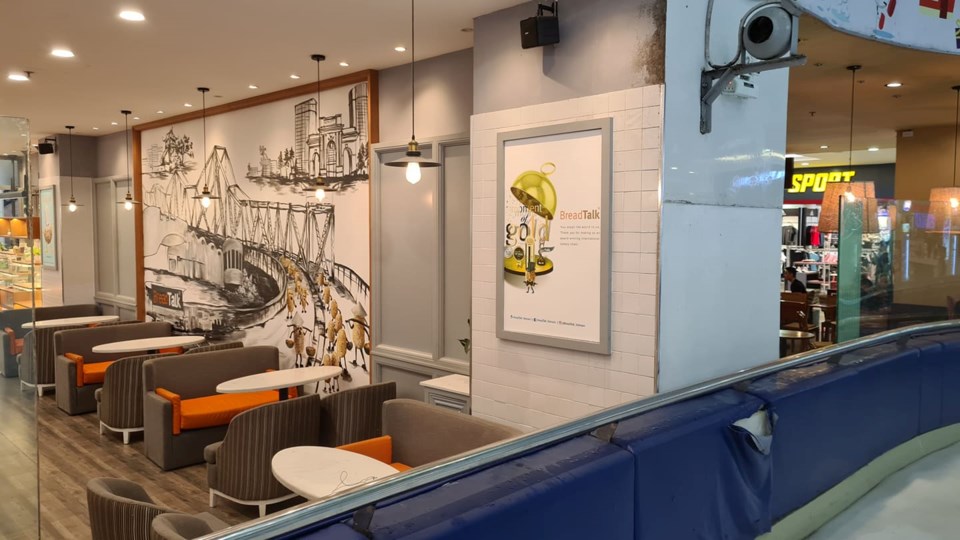 Cushioned boards, a handlebar, and missing glass looking in on a bakery are some of the features of the ice rink in Hanoi. By Nguyen Hoang Duy

Still, the hockey players in Hanoi soldier on for the love of the game. Jimmy is excited at the possibility of Saturday’s Hockey Night in Canada growing the game even more among the Vietnamese community and is blown away at the opportunity.

“Dude, it is totally insane to think I will be on the air live talking about ice hockey to a Vietnamese-speaking audience,” he said. “If someone told me 10 years ago this would happen in my lifetime, I would want what he is smoking.”

Kevin Bieksa has a framed photo of naked Ryan Kesler behind him on the Hockey Night in Canada panel
Feb 13, 2021 8:38 PM