Thanks to the ongoing COVID-19 pandemic, we've been getting an unexpected view into all sorts of people's homes.
Feb 13, 2021 8:38 PM By: Daniel Wagner 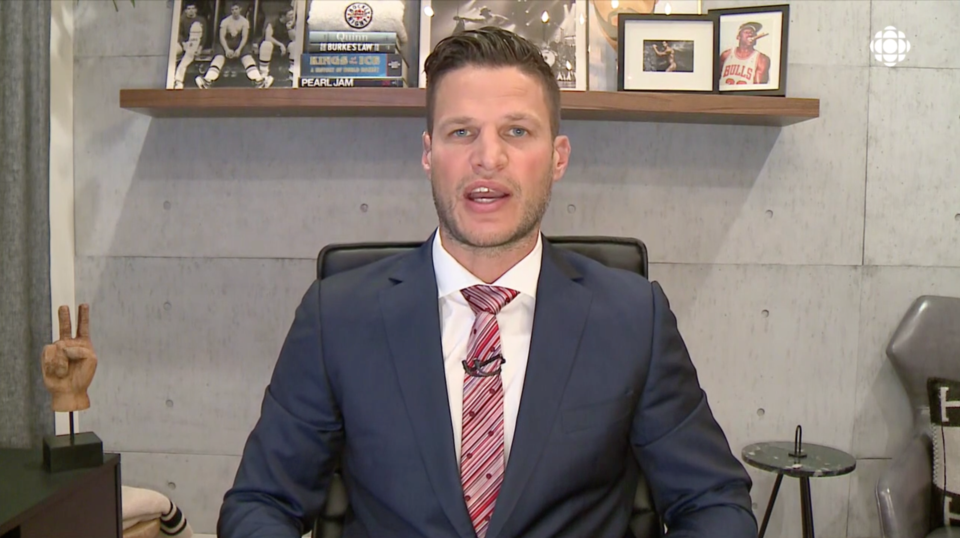 Kevin Bieksa has a special guest behind him on Hockey Night in Canada: naked Ryan Kesler.CBC

Thanks to the ongoing COVID-19 pandemic, we've been getting an unexpected view into all sorts of people's homes. Whether it's a coworker's home office during meetings on Zoom or celebrity living rooms during TV interviews, people are looking at not just the person talking, but what they have going on in the background.

It led to a popular Twitter account with over 380,000 followers, Room Rater, which hands out ratings to Skype and Zoom backgrounds, whether it's a well-stocked bookshelf or a brightly-painted wall.

Of course, sometimes what's going on in the background can reveal a little too much, like when Vancouver City Councillor Gordon Price trusted that his green screen effect would hide everything that happened behind him for an appearance on Global News, only to have a portion of his naked husband appear instead.

Saturday's Hockey Night in Canada broadcast also featured some male nudity behind one of their experts, though this time it was intentional. Eagle-eyed viewers saw that former Canuck Kevin Bieksa had a photo of one of his old teammates framed on his shelf behind him. It was Ryan Kesler in a state of undress from his photoshoot for ESPN magazine's The Body Issue.

Bieksa's fellow panel members drew attention to the photo in the first intermission of the Canucks' game against the Calgary Flames.

"Don't think that your photography has gone unnoticed tonight," joked Elliotte Friedman, then poked fun at Bieksa for temporarily removing the photo from his shelf after it was initially pointed out on Twitter.

The photo was back during that segment, however, as Bieksa apparently decided he wasn't ashamed of the naked body of his good friend.

Kesler wasn't ashamed of the photo either when I spoke to him about it back in 2012. Did he have any regrets?

"No, not at all," said Kesler. "Pretty soon I’m going to be out of shape and that picture’s probably going to be on my fridge and I’ll say, 'Once upon a time…'"