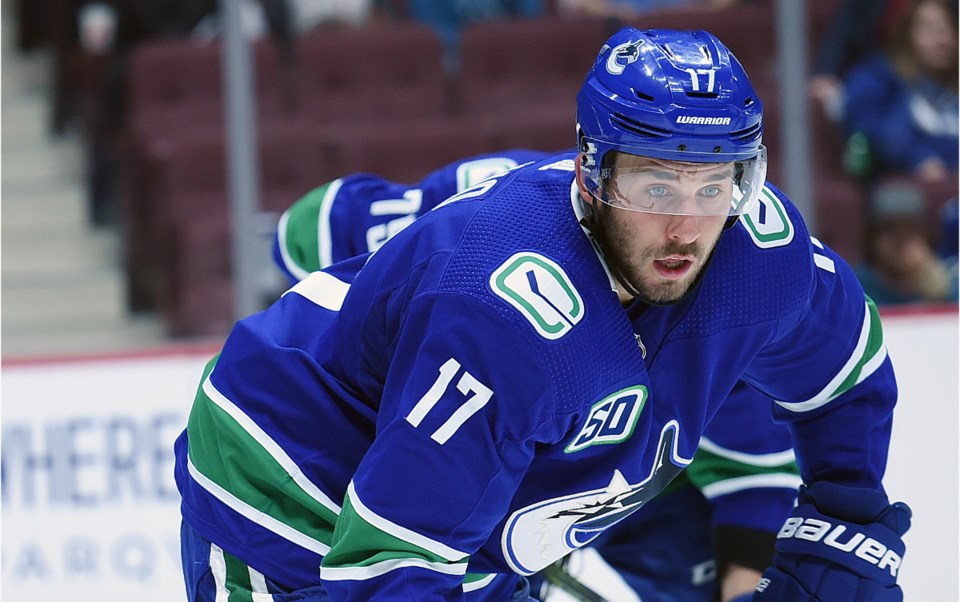 Josh Leivo was an underrated contributor to the Canucks' success this season before suffering a knee injury. photo: Dan Toulgoet

“It saved my career,” Josh Leivo said of his trade to the Vancouver Canucks.

Playing for a coach that liked him about as much as bathtubs like toasters, Leivo later described his situation playing under former Toronto Maple Leafs head coach Mike Babcock as “toxic.”

Once arriving in Vancouver, he was greeted by a coach who loves two-way players, and, conveniently, there was an opening on the Canucks’ first line playing alongside rookie sensation Elias Pettersson.

Leivo immediately got an opportunity on that line, a major jump from rotating between the Leafs’ fourth line and the press box. He made good on that opportunity, scoring 10 goals for the Canucks after the trade, and was rewarded with a one year “show me” deal this past summer.

The Canucks made it clear to everybody this past offseason that they were looking to turn the corner. The Miller trade showed it, and the Micheal Ferland signing showed it, too. Suddenly there was a lot more competition on the wing and players who were mainstays in the lineup the year before were going to be out of jobs by the end of training camp. Leivo did everything in his power to make sure he wasn’t one of them.

On the third line, Leivo found success early on alongside Brandon Sutter and Micheal Ferland. When the latter two went down with injuries, Leivo slid up and down the Canucks lineup but one thing remained constant: Leivo was a solid two-way winger who rarely made any mistakes.

One might describe Leivo as a poor man’s Tyler Toffoli, a player the Canucks acquired at this year’s trade deadline.

Both players’ biggest strengths are their shots, both are able to handle their own on the power play, and both are more than capable of playing a complete 200-foot game.

The Canucks could be right up against the cap this summer, and with Toffoli, defenceman Chris Tanev, and goaltender Jacob Markstrom all set to hit the open market, the team could have some tough decisions to make in the coming months.

If they can’t re-sign Toffoli this July, Leivo will almost certainly receive an offer from the Canucks.

Let’s make something clear. Leivo is a solid middle-six winger, but Toffoli is a proven top-six winger. There’s a reason that the latter is set to cash in on a big payday this summer while the former could sign for less than $2 million — just a $500,000 increase from the contract he inked with the Canucks this past offseason.

But what do the Canucks really have in Leivo? What makes him such a stable middle-six winger?

Before going down with an injury, Leivo tallied seven goals and 12 assists in 36 games, a very respectable offensive output for a third line winger. Point production aside, Leivo brings some things to the table that coaches like Green love. Let’s break that down further.

The thing that comes to mind first with Leivo is his ability to dig the puck out of a crowd and move it to open space in a hurry.

Here, Leivo battles for a loose puck against two Sharks, fends off the opposing players, and gets a shot on goal that directly results in a goal.

Here Leivo digs the puck free in a battle along the boards and chips it ahead to a semi-open teammate. If Ferland handles this pass, that’s a legitimate scoring opportunity going the other way.

Leivo’s corsi numbers suggest that he drives play well and seldom gets hemmed in his own end chasing the puck around. Rather, he’s good at winning the puck back in a hurry if he or his teammates lose it to the opposition.

Corsi, a measure of shot attempts for and against at 5-on-5, helps indicate how often a player’s team is in possession of the puck when he is on the ice. Just five players on the Canucks had a corsi percentage of over 50% this season: Elias Pettersson, J.T. Miller, Brock Boeser, Tyler Toffoli, and Josh Leivo.

When a middle six winger is mentioned in the same breath as the Canucks’ first-line forwards, it means he’s doing something right.

Another way you can look at Leivo analytically is with HockeyViz’s isolated impact heatmaps. These show where shot attempts happen when Leivo is on the ice at 5-on-5, taking into account his usage, teammates, competition, and other factors. As you can see, he tilts the ice significantly towards the offensive end of the ice. 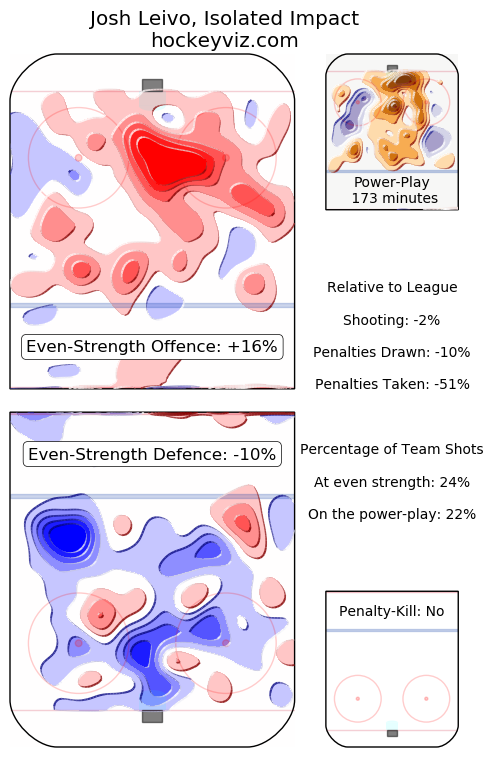 A lot of that impact comes from his ability to win puck battles.

"Come out with the puck, that's exactly it,” said Leivo earlier in the season about his mentality in puck battles. “I just want to get low and find a way to try and surprise the guy, maybe with a stick lift or get my body position in front. I've always prided myself on trying to retrieve pucks back on the walls or anywhere on a forecheck. It's been my thing.

"There's always some timing involved. Sometimes when they're about to shoot or rim the puck, you get them right on a stick left and it throws them off… I think over the years you learn things from other players and how they steal pucks. If you're watching, you try to add that to your game and that's what I've done."

But which players is Leivo talking about? He specifically mentioned a 31-year-old AHLer with whom he played at the AHL level years ago, former Leafs’ teammate Auston Matthews and the great Pavel Datsyuk.

"I played with this guy named Spencer Abbott, little guy, but he was really good at stealing pucks and then Matthews is unbelievable at stealing pucks and watching Datsyuk over the years, not saying I'm anything like him, just watching how he steals pucks,” said Leivo. “He was one of my favourite players growing up. So just watching those guys, and trying to throw it into my game.”

In the play below, Leivo sneaks in while Sven Baertschi battles with a Stars forward and pilfers the puck, then makes the right play to give his team a chance to maintain control of the puck:

Even in high-pressure situations, it seems that Leivo rarely coughs up the puck after stealing it from an opponent. Here, he quickly plays the puck to an open wing under pressure from two opponents.

This defensive play is all fine and dandy, but the Canucks have more than enough forwards who focus on the defensive end, but pose little to no offensive threat. The Canucks need legitimate two-way players, and Leivo provides just that.

Leivo has a deadly shot and a high level hockey IQ. This makes him a solid right shot option on the power play unit. The Canucks used him on the first unit at times this year, but his true home was on the “shoot first, ask questions later” second unit the Canucks constructed this year.

Beyond his shot, Leivo can also make plays for his teammates. Here is Leivo showing great patience while he waits for a better passing lane to open up on the rush with the man advantage:

Leivo can shoot, pass, and is one of the Canucks’ best two-way wingers. He may be forced out if the Canucks’ manage to re-sign Toffoli (which would be far from a bad thing), but the point remains — Josh Leivo is a cheap middle six option who the Canucks should think twice about letting walk in free agency.