Bo Horvat did a Zoom call for the NHL, but we need to talk about the cactus mural behind him

Horvat had a lot of good things to say, but first let's talk about his wonderful prickly pear cactus watercolour wallpaper.
Mar 27, 2020 3:39 PM By: Daniel Wagner 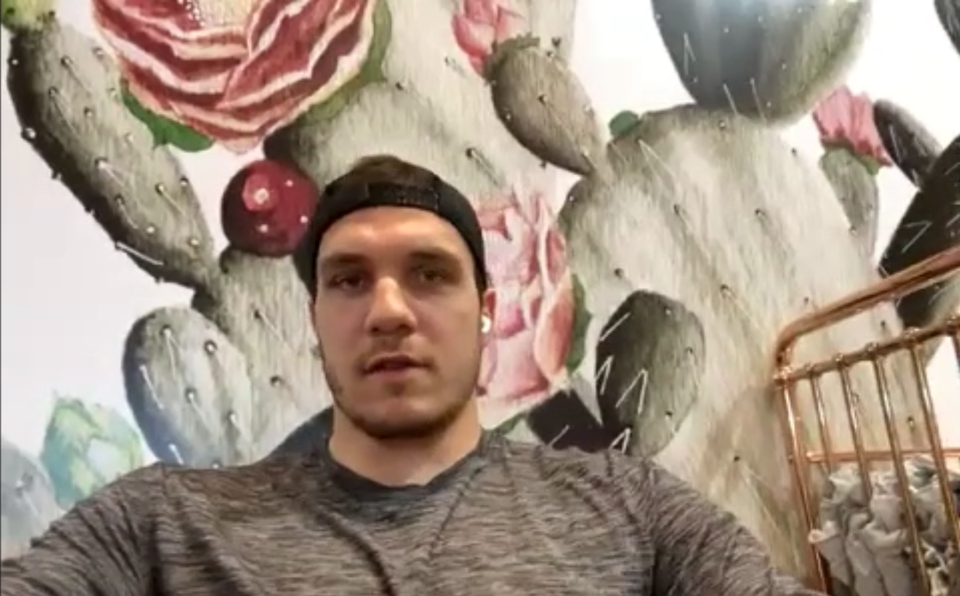 Bo Horvat talks to the media via Zoom, but also, check out that sweet prickly pear cactus mural. photo: NHL

During the hockey season, you get used to hearing from NHL players almost daily. The media is in the room talking to the players after practices, morning skates, and games, getting their take on their upcoming opponent, a goal they scored, or, sometimes, who has the best and worst autograph on the team.

With the season suspended due to COVID-19, we haven’t heard from the players as much, apart from occasional Instagram videos and stories. The NHL, looking to keep the game and their players in the spotlight, has started hosting Zoom conference calls for the media with some top players.

On Friday, it was time for the Pacific Division, with four captains coming together to talk hockey and answer some questions from the media. It was Connor McDavid of the Edmonton Oilers, Mark Giordano of the Calgary Flames, Oliver Ekman-Larsson of the Arizona Coyotes, and Bo Horvat of the Vancouver Canucks.

But before we can get into anything that Horvat or the other captains said, we have to address the most important part of the entire Zoom call: the glorious cactus mural behind Horvat.

Everyone else in the video picked a fairly neutral backdrop — Ekman-Larsson was in a tastefully-painted grey room with a triptych of what appeared to be paintings of clouds. Giordano looked to be in a kitchen or living room, with a plain, off-white ceiling framing his head. McDavid had an abstract grey and white painting to his right, with some sort of black, wooden wall installation behind him. In other words, it was all monochromatic: blacks, greys, and whites.

Horvat, on the other hand, brought a vibrant splash of colour, with the red and pink flowers of the prickly pear cactus immediately behind him, bursting forth from the pale green of the cactus itself. As an accent piece, there was a gold-coloured metal contraption to his left, perhaps part of a bed frame or fancy laundry hamper, it’s hard to say.

If Horvat was looking to make a statement with the backdrop on this Zoom call, he succeeded.

The mural in question was designed by Shealeen Louise, a botanical watercolour painter from New Mexico. She describes herself as a “Lord of the Rings super-nerd” and has created designs for a number of brands, including Urban Outfitters.

The mural in Horvat’s background is called “Prickly Pear Mural,” and is available as a wallpaper for $439 USD from anewall, just in case you wanted to take design inspiration for your home from Horvat’s Zoom background. I am not being sponsored for this post, just passing along information.

Horvat is back home in Ontario with his wife, preparing for the birth of their baby, so this particular mural is presumably in his house. Perhaps, like the picture of the wallpaper on the anewall website, it’s even part of the decor for the baby’s room.

The reason Horvat returned home instead of staying in Vancouver during the suspended season is because of his wife’s pregnancy.

“We just wanted to be home, just in case,” said Horvat. “That’s where she wants to have the baby… Our family’s health is the most important thing.”

The extra preparation time for a family expecting a new baby might be a benefit, though Horvat admits he’s unprepared in one aspect.

“I’ve never changed [a diaper] in my life, so it’s going to be interesting,” he said. “My wife and I just painted the nursery last night. My first time painting, so it’s a little rough around the edges.”

Since Ontario is his off-season home, Horvat has a gym in his home, so he’s doing his best to stay in shape during the break.

“There’s nothing like being in game shape or on-ice shape, it’s totally different,” he said. “You maintain whatever you can and try to be in the best shape you can. If we do end up coming back, then that’s going to be a huge advantage.”

The one benefit of this downtime for the Canucks is that they’ll be getting players back who were injured before the season was suspended. Horvat specifically mentioned Jacob Markstrom and Chris Tanev, but the Canucks could also see the return of Josh Leivo.

“It’s definitely going to help to get our roster healthy and get back going again,” said Horvat. “We have a lot of guys that are important pieces to our team and if we can put it all together, and stay healthy, and play the way we know how to play, we’re going to have a lot of success going forward. We’re trending in the right direction.”

The person running the call for the NHL, John Dellapina, also sprinkled in some light-hearted questions. He asked the four players what they missed the least about playing each other, which led to some good banter and tire-pumping, even if it wasn’t always 100% accurate.

McDavid, for instance, took the time to praise Horvat for his faceoffs, saying, “Probably losing every faceoff against Bo. I’m not very good at faceoffs, but obviously when you go into Vancouver and get to play every shift against Bo, you don’t win many draws.”

Horvat pretty quickly corrected him: “No, he actually roasted me this year [on faceoffs]. I don’t know what it was.”

According to The Athletic’s Thomas Drance, Horvat was exactly right: McDavid owned him on faceoffs this season.

#Canucks' Bo Horvat was dead on when he said that Connor McDavid "roasted" him in the faceoff circle this season.

Giordano, meanwhile, took the time to good-naturedly rip Ekman-Larsson: “What Oliver means was when he crushed me a couple times, one time I thought it was from behind, so we sorta got into it there.”

“The side, I would say,” responded Ekman-Larsson. “Pretty clean.”

When asked which teammate he would most and least want to be quarantined with for two weeks, Horvat hemmed and hawed a little, but had an answer.

“I'll go with Sutter. Him and I are pretty close and share similar interests and stuff like that, so I’d have to go with him,” he said. “Least? I’m going to have to go with Virtanen. I don't know, I always like getting under his skin and chirping him, so that’s all I'm going to say for that.”

Perhaps if Horvat was more of a Lord of the Rings nerd like Shealeen Louise, he would want to be quarantined with Virtanen more. They could repeatedly marathon the Lord of the Rings movies and discuss their favourite scenes together. Perhaps it would be a good time to pick a Lord of the Rings podcast and really delve deep into the trilogy's themes.

In any case, it’s probably best that he left it there. Discretion is the mark of a good leader. Speaking of, Horvat was asked about this being his first year as captain and the added pressure that goes along with the role.

“I’ve learned a lot. You try to see what other guys do. I kind of picked Hank and Danny’s brain a little bit,” said Horvat. Let’s pause and address that Horvat said “Hank and Danny’s brain,” singular, as if they share a single brain. I have nothing particularly pertinent to say about that, just wanted to point it out.

“I can’t say it’s been easy, there’s definitely that added pressure, you want to perform, you want your team to do well every single night,” he added. “I’m just trying to embrace it, learn as I go. All these guys on the call here are phenomenal captains. I’m just trying to take and learn what I can from each individual.”

That was far too nice, but Horvat got a bit more self-interested when he was asked about how the NHL should handle the rest of the season and decide who gets into the playoffs.

“Either go by points percentage or play some more regular season games,” he said. “If we’re gonna start the playoffs right away, obviously — sorry, Gio, I don’t know if you guys would be in or not — definitely by percentage and I think that would put us in, but it’s tough to make that call, that’s for sure.”

For the record, Giordano and the Calgary Flames would still be in the playoffs if the NHL went by points percentage, if only just. The Flames would fall to the second Wild Card spot, just a fraction of a percentage ahead of the Winnipeg Jets.

Just like most people, NHL teams are staying in touch through group chats, though Ekman-Larsson admits he’s thinking of getting out — “I’m actually thinking about deleting [the group chat] because it’s a lot of weird pictures and stuff like that.”

“A lot of group chats going on. We probably have a hundred that keep getting started and restarted back up so I’ve got a lot of messages on my phone coming from everywhere,” said Horvat. “A lot of chirps, a lot of joking around like we would in the locker room. Everybody’s missing the game, everybody wants to get back and play hockey as soon as possible, but everybody’s trying to do what’s best for their families, keep their families safe and ride this thing out until everything’s safe and ready to go.”

That’s the key here and it was repeatedly reiterated by all the players. As much as they’re raring to get back on the ice, the most important thing is staying safe, keeping their families healthy, and supporting those keeping everyone else healthy.

“Obviously we miss you guys, the fans,” said Horvat, “but we can’t thank the people enough — the medical staff, the people on the front lines taking this thing head on, putting themselves at risk, but also helping others that are in desperate need right now.”

Canucks in-arena announcer Al Murdoch takes to TikTok to call goals for socially-distanced fans
Mar 16, 2020 1:03 PM
Comments
We welcome your feedback and encourage you to share your thoughts. We ask that you be respectful of others and their points of view, refrain from personal attacks and stay on topic. To learn about our commenting policies and how we moderate, please read our Community Guidelines.