What can the Canucks learn from how the Tampa Bay Lightning and Dallas Stars deploy their defencemen?
Oct 16, 2020 5:10 PM By: Daniel Wagner 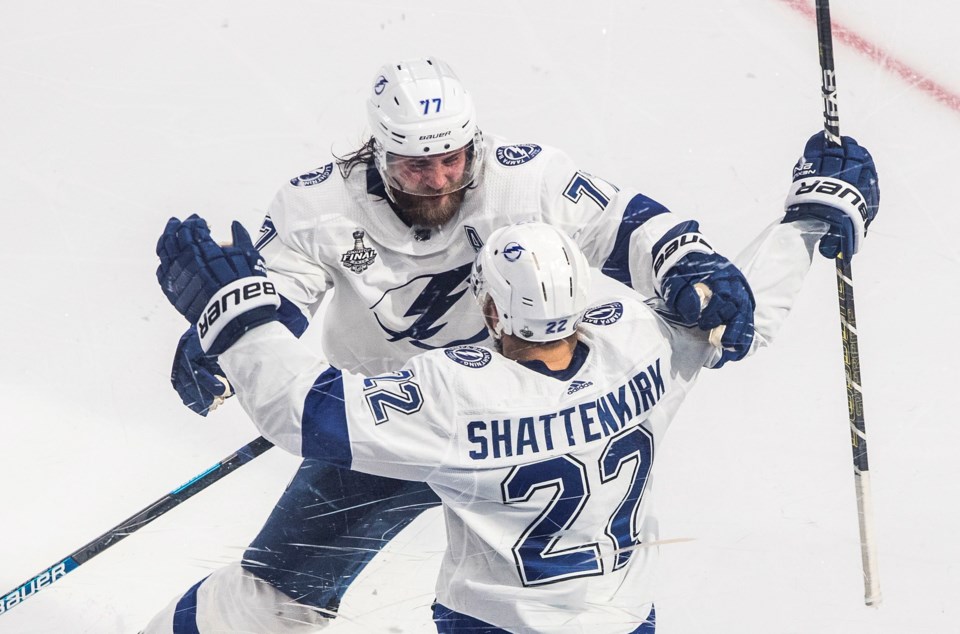 The Tampa Bay Lightning are one of the NHL’s most well-constructed teams. They have a rock-solid core group headlined by Steven Stamkos, Victor Hedman, Brayden Point, Nikita Kucherov, and Andrei Vasilevskiy, along with impressive depth that was patiently acquired via the draft and savvy trades, as well as a smattering of free agent signings.

Over the past few seasons, the Lightning have been one of the best teams in the NHL, winning the Presidents’ Trophy last season before taking home the Stanley Cup this season. While their first-round knockout in last year’s playoffs had some questioning the team’s ability to win in the postseason, their Stanley Cup this year has cemented the Lightning as a model franchise.

There’s a lot the Canucks can learn from the Lightning. Much of what I wrote back in 2018 still applies — the Lightning have found market inefficiencies at both the draft and in free agency —  and Thomas Drance at The Athletic had a few ideas as well, but there’s one thing that really sets the two teams apart.

It’s not the top-six forwards, though the Lightning have the edge there, not even needing Stamkos for all but 2:47 of the Stanley Cup playoffs. It’s not the bottom-six forwards, though the Lightning have better (and cheaper) depth than the Canucks. It’s not even in net, though Vasilevskiy was a worth Vezina winner last season and finished third this season.

No, what really sets the two teams apart is the ability of their defencemen to transition the puck up ice.

Zone Exits: Why Quinn Hughes can’t do it alone

The Canucks’ ability to break the puck out of the defensive zone and into the offensive zone took a serious step forward this past season, largely thanks to Quinn Hughes, who is elite in that area of the game. The problem for the Canucks last season is they lacked anyone else that moves the puck at a high level, something that got seriously exposed in the playoffs, particularly against the Vegas Golden Knights.

When you compare the Canucks’ defence directly with the Lightning’s defence from last season, the difference is stark. Using zone exit and entry data tracked by Corey Sznajder and visualized by CJ Turtoro from the past three seasons, we can immediately see that the Lightning’s backend is significantly better at transitioning the puck up ice.

I took the defencemen that played at least 500 minutes at 5-on-5 for each team and their controlled zone exit and zone entry percentage as a percentile. For those unfamiliar with percentiles, it simply means that the given player is better than that percent of his peers.

In the case of Hughes, he’s in the 98th percentile for zone exit percentage. When he attempts to move the puck out of the defensive zone, he does so with possession of the puck better than 98% of other NHL defencemen. That’s amazing, but he’s even better at entering the offensive zone with possession: he’s better than 99% of other defencemen, which is basically another way of saying no one else is better.

After Hughes, however, the Canucks’ defence falls sharply.

After Myers, the departed Chris Tanev and Troy Stecher were right around league average. Then we get declining returns from third-pairing defencemen Jordie Benn and Oscar Fantenberg until we reach the most concerning player on the list: Alex Edler.

Edler has traditionally been thought of as a puck-moving defenceman, but that hasn’t really been true for several seasons now. As his game has slowed down, Edler has become much more of an off-the-glass-and-out type of defenceman, safely getting the puck out of the defensive zone, but rarely with possession. As a result, the opposing team gets the puck back and frequently comes right back into the Canucks’ zone.

The Lightning, on the other hand, had puck-movers to spare last season. While they don’t have anyone at the level of Hughes, Mikhail Sergachev and Victor Hedman are safely in the upper echelon. From there, there’s barely a step down to Ryan McDonagh and Erik Cernak.

Kevin Shattenkirk, since signed by the Anaheim Ducks, is closer to league-average in zone exits — his strengths lie more with in-zone defence and offensive creation, as opposed to in transition — while Braydon Coburn is well below average, comparable to Fantenberg and Edler in zone exits.

Consider that Coburn is a third-pairing defenceman who averaged just over 14 minutes per game this past season, while Edler led the Canucks in ice time per game.

The key advantage of so many puck-moving defencemen for the Lightning is it ensured the puck didn’t stay in their end of the ice for long. When they gained possession of the puck in the defensive zone, their defence was able to quickly move the puck up ice and into the offensive zone to create chances.

They also did an excellent job of making up for the few defencemen that struggled with zone exits. Hedman was frequently paired with Shattenkirk, as well as Jan Rutta, who didn’t quite make the cut for this list in ice time, but also had issues with zone exits. That way, Hedman was able to take on the bulk of that responsibility for the pairing.

Where the Lightning really got dangerous is on their second pairing, where they were frequently able to pair two second-tier puck-movers together, like McDonagh and Cernak. With both defencemen on the pairing equally capable of breaking the puck out of the zone, that made the pair difficult for forecheckers to pin down.

Compare that to the Canucks.

The pairing of Hughes and Tanev worked because Hughes is elite and Tanev is at least league-average at breaking the puck out. Beyond that pairing, however, the Canucks were in trouble.

Essentially, the Canucks had just one true puck-moving defenceman, since Myers’ zone exits took a tumble this past season. And when Myers was out with an injury in the playoffs, things got even more dire.

Essentially, the Canucks’ version of having a puck-mover on every pairing was Hughes, Myers, and Stecher. Comparing that to the Lightning just feels unfair.

This offseason, the Canucks said farewell to Tanev and Stecher, but they are rumoured to be bringing back Fantenberg, while Edler is signed for one more year. That’s concerning, as Tanev and Stecher were league-average in zone exits.

Fortunately, circumstances gave the Canucks the opportunity to trade for Nate Schmidt, who is a high-end puck-moving defenceman.

Schmidt changes the dynamic significantly for the Canucks, particularly if we compare the Canucks’ defencemen for next season to the other team that made the Stanley Cup Finals: the Dallas Stars.

While the Stars didn’t have the depth of puck-moving defencemen of the Lightning last season, they made up for it with two high-end puck-movers: John Klingberg and Miro Heiskanen. The two are adept at moving the puck out of the defensive zone with both their feet and passing and they’re both even better — among the NHL’s elite — at transitioning the puck all the way into the offensive zone with possession.

Klingberg is absolutely ridiculous. Witness this zone exit against two of the best forecheckers on the St. Louis Blues, Ryan O'Reilly and Jaden Schwartz.

I'm well aware of how on brand and nerdy that sounds

But this John Klingberg one made me laugh pic.twitter.com/5rNjp7DH12

The Stars split their puck-movers across their top two pairings — easy enough to do when they both play on the right side — and then barely played their third pairing at even strength, particularly in the playoffs.

Klingberg was paired with long-time partner Esa Lindell, who makes up for his deficiencies in exiting the zone by being one of the best in the NHL at preventing zone entries by the opposition. Heiskanen was paired up with Jamie Oleksiak, who may be awful at exiting the defensive zone, but is surprisingly good at gaining the offensive zone.

Roman Polak, incidentally, opted out of the playoffs and was replaced by Taylor Fedun and Joel Hanley, both marginally better than Polak at moving the puck up ice.

You can see how the Stars represent a template for how the Canucks can leverage their puck-moving defenceman. With Hughes and Schmidt split between the top two pairings, the Canucks’ top four should be very good at moving the puck out of the defensive zone, even with Edler’s struggles in that area and Myers’ issues this past season.

The wild card is whoever rounds out the defence corps. I left Fantenberg on the list and added Olli Juolevi, for whom we have no zone exit or entry data, but you can also include Brogan Rafferty, Jack Rathbone, Guillaume Brisebois, and Jalen Chatfield as defencemen that might cycle into that third pairing.

The Stars made their defence work by simply playing Klingberg and Heiskanen a ton and limiting the minutes for their third pairing. If the Canucks can find an above-average puck-moving defencemen from one of their prospects, however, they could have a true puck-mover on every pairing.

That should mean less time spent stuck in the defensive zone, no matter what pairing is on the ice.

There are two major risks: one is the possibility that none of those prospects are able to step up. The other is injury: if one of Hughes or Schmidt gets injured, the Canucks simply don’t have the defensive depth to adequately cover their puck-moving ability.

Still, the addition of Schmidt gives the Canucks a real chance to be a strong team in transition next season.

What can the Canucks learn from how the Dallas Stars were constructed?
Sep 16, 2020 2:20 PM
Comments
We welcome your feedback and encourage you to share your thoughts. We ask that you be respectful of others and their points of view, refrain from personal attacks and stay on topic. To learn about our commenting policies and how we moderate, please read our Community Guidelines.