Jayce Hawryluk could wind up in the Canucks top-six

The Canucks are rapidly running out of cap space, but they still have some significant needs. Jayce Hawryluk, signed Monday to a one-year, two-way deal worth $800,000 in the NHL and $200,000 in the AHL, could have an outside shot of filling one of those needs.

Let’s back up. The Canucks’ two biggest needs after the first day of free agency were in the top-four on defence and top-six at forward. On defence, Nate Schmidt could be a game-changer, but they could still use another defenceman with NHL experience for the third pairing, as they look awfully vulnerable if injuries strike.

At forward, the Canucks badly need one more right winger to play on the first or second line.

Last offseason, Micheal Ferland was meant to fill that hole as a banger and crasher that could also put the puck in the net and play with skilled linemates. He started the season on the top line with Elias Pettersson and Brock Boeser, but it wasn’t working even before Ferland suffered a concussion and missed the bulk of the season.

J.T. Miller joined the top line and thrived, but Bo Horvat and Tanner Pearson were left with a rotating cast on the right wing. Loui Eriksson, Jake Virtanen, Josh Leivo, and Zack MacEwen all spent time on their wing, with mixed results.

That’s one of the reasons why it was tough to see Tyler Toffoli leave in free agency. He filled a clear need for the Canucks and it would have been great to see him play a full season — or however long the 2020-21 season is — with Pettersson and MIller, allowing Boeser to play on the second line with Horvat and Pearson.

Without Toffoli, the Canucks are right back where they started, with no clear winger for the Horvat line. Virtanen could play on that line, but his defensive lapses are troubling for a line that’s frequently matched up against tough competition. Leivo is still unsigned and is a question mark coming off a major knee injury. Ferland intends to play next season, but is a major injury risk.

After that, who do the Canucks have? Kole Lind is the team’s top prospect available on the right wing, but it’s unclear if he’s even ready for the NHL, let alone a top-six role. Nils Höglander could use a season in the AHL. Vasili Podkolzin is stuck in the KHL until his contract ends.

"He’s a young player," said Jim Benning to Patrick Johnston of The Province. "He’s being given a new start with a new team. He’s a depth guy but we’ve got hopes for him."

Who is Jayce Hawryluk and what does he do?

The 24-year-old forward was drafted as a centre from the Brandon Wheat Kings in the WHL, but has spent the bulk of his time in the AHL and NHL on the right wing. The Canucks liked Hawryluk in his draft year, but went with Jared McCann at 24th overall when he slid down the draft and Hawryluk was gone before they picked again at 36th overall. The Canucks ended up getting Thatcher Demko instead, so they're likely not too upset about it.

“I didn’t know if I was gonna be picked by [the Canucks] and obviously I wasn’t, but they’ve continued to express interest in me throughout the years,” said Hawryluk on a Zoom call with the media on Monday. “That was definitely a point that made me choose them.”

After he was drafted, Hawryluk erupted in the WHL, scoring 47 goals and 106 points in 58 games in his final year. Joining the Florida Panthers farm team, he grew into a larger role over several seasons, putting up 32 points in 31 games for the Springfield Thunderbirds in the 2018-19 season. The Panthers couldn’t keep him in the AHL with that kind of production and he played 42 games in a fourth-line role.

This past season, however, Hawryluk fell out of favour in Sunrise. Injuries and a new bench boss limited Hawryluk to just 15 games for the Panthers, averaging under 10 minutes per game, and he was placed on waivers, where the Ottawa Senators were all too happy to snatch him up.

Side note: the Senators were reportedly close to trading for Nikolay Goldobin from the Canucks until they claimed Hawrlyuk off waivers.

This is where things get interesting. Hawryluk’s role expanded only slightly in Ottawa — he averaged 13 minutes per game with the Senators — but he made the most of his minutes, putting up 7 points in 11 games, all of them at 5-on-5.

“They gave me a great opportunity to play and show my potential and what I can do out there,” said Hawryluk.

What Hawryluk can do is a variety of things. He’s got a relentless motor and a blue-collar work ethic, getting in hard on the forecheck with speed and throwing hits that belie his 5’11” stature. He’s been excellent defensively in his brief time in the NHL, but he can also dish the puck and finish around the net, with 10 goals and 22 points in 68 career games.

Think Tyler Motte, but with better vision and hockey sense. He's also more vocal on the ice, getting under the skin of his opponents.

“We're not out there to be friends,” said Hawryluk. “Even if you know the guy off the ice, you're out there to do one thing and that's win the hockey game. And if that's a chirp here and there to throw a guy off his game or just let him know, ‘If you want it, I'm here to give it to you,’ I feel like that's just part of my game.”

The Platonic ideal of a Travis Green player 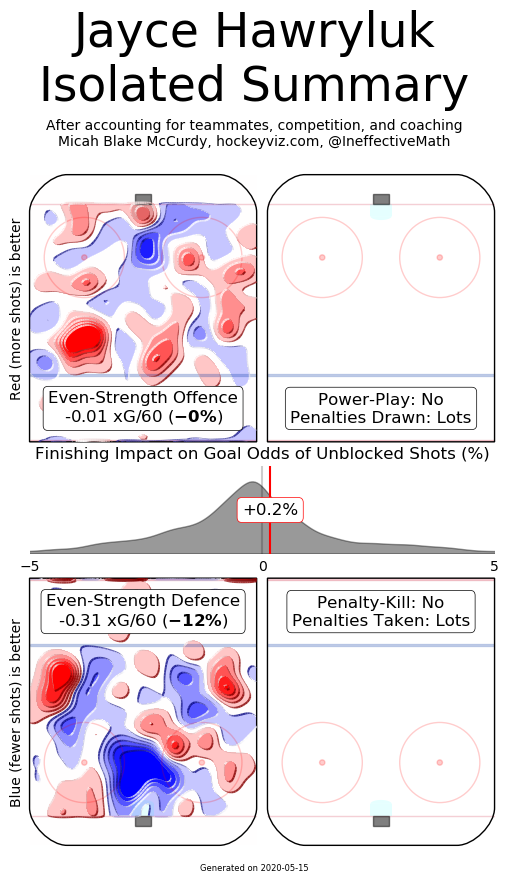 That’s reflected in other numbers as well. His corsi at 5-on-5 was 53.0% last season between the Panthers and Senators and his expected goals percentage was 52.8% — in other words, both his teams out-shot and out-chanced the opposition with Hawryluk on the ice.

“Everyone's out there for one reason and that’s to win the game, and to win the game that entails doing all the small things right,” said Hawryluk. “You're not going to score goals if you're not winning battles on the wall and you're not getting the puck first, so I just pride myself in all those little details and working as hard as I can.”

If that sounds like the Platonic ideal of a Travis Green player, Hawryluk likely agrees: “They have a great coach. He plays that style of game that I bring, so I just thought it was a perfect fit.”

It’s easy to see how Hawryluk could fit into a bottom-six role with the Canucks. While he hasn’t killed penalties at the NHL level, it shouldn’t be difficult to add that to his repertoire with his sound defensive game. The question is whether Hawryluk has more to give.

“Personally, I think I haven't reached my full potential at all,” he said. “I want to contribute offensively, but I also want to contribute to the team, however, they need me to contribute so whether that's playing that third or fourth-line role for Travis, or needing to be slotted in wherever he needs me to help guys.”

Hawryluk has the ability to move up and down the lineup because he has skills beyond his speed and grit. He was one of the Senators’ best forwards after they claimed him off waivers and, frankly, it’s surprising he wasn’t re-signed.

Let’s run through some quick highlights that illustrate his hockey sense and bullet of a wrist shot, at least when he has time to release the puck.

If you want nifty saucer passes over a sprawling defenceman, Hawryluk is here for you.

If you would prefer your saucer passes to come with a side of hard work to win back the puck in the offensive zone, here comes Hawryluk.

If you just want the hard work and don't care about the saucer pass, guess what, Hawryluk has you covered.

Want some hands, patience, vision, and the awareness to go to the net? Yep, here's Hawryluk.

Is it crazy to suggest Hawryluk has top-six upside?

Hawryluk, in a vacuum, is not a top-six forward. His gritty game is ideally matched for a third-line role. But sometimes a "third-line player" can absolutely fit into a top-six in a complementary role.

Does Hawryluk have the defensive game to play with Horvat and Pearson on the second line? He’s never been in a matchup role, but his great defensive numbers suggest he should be able to handle it. Alternatively, do Pettersson and Miller need a speedy forechecker to win them the puck then go to the net? Maybe.

Okay, it’s a longshot, but Hawryluk’s performance in Ottawa suggests he’s just waiting for an opportunity. That opportunity may very well come in Vancouver, if only by default. Unless the Canucks can shed some serious salary, they’re not adding a significant piece to the roster. Maybe their only hope for finding a top-six winger is taking a chance on a player like Hawryluk.

Even if he doesn’t start in the top-six, he may find his way there eventually. If Virtanen struggles in a top-six role or Boeser suffers an injury, who steps up into the top-six? Zack MacEwen? Loui Eriksson? Antoine Roussel? Why not try the 24-year-old winger that has produced at every level prior to the NHL and has shown an ability to drive puck possession?

At the very least, Hawryluk provides a much cheaper option in the bottom-six, giving the Canucks some cap savings if they demote someone like Eriksson to the AHL.

As for Hawryluk, he’s just eager to prove he belongs in the NHL, particularly on a team he sees as ready to take the next step.

“I see a young, fast team that’s on the cusp of winning,” said Hawryluk.