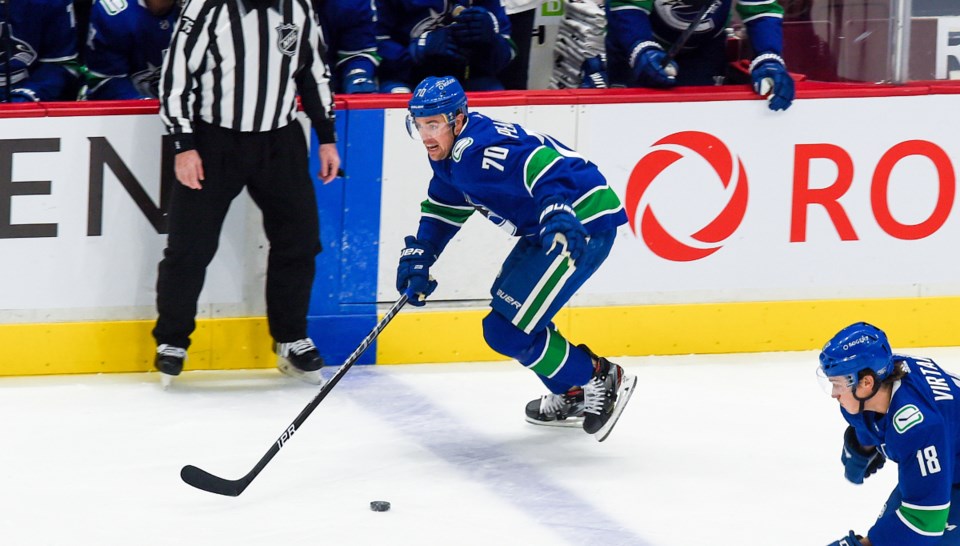 It’s not surprising. Benning is very straight-forward, not particularly underhanded, and is more than willing to work with agents to get a deal done with favourable terms, such as no-movement and no-trade clauses for players that might not otherwise get them.

In the case of Tanner Pearson, it appears that his agent got exactly what he wanted out of Benning, by Benning’s own admission.

“When we talked to his agent, we kind of went through the process and decided that if he goes to free agency that this number is probably the number he is going to get in free agency,” said Benning.

In other words, Benning believes that someone would have paid $3.25 million per year for Pearson in free agency, so locked him up for three years at that exact price four months before free agency opens.

A history of overpayments

Exactly six years before Benning re-signed Pearson, he made a pair of other much-maligned re-signings.

On April 8, 2015, Benning gave multi-year deals to bottom-pairing defenceman Luca Sbisa and fourth-liner Derek Dorsett. Sbisa got $3.6 million per year, while Dorsett got $2.65 million, both far more than other players in their positions would typically make. Those two signings were immediately roasted and there was a. suggestion that they might be a sign of things to come.

Here’s the bright side: at least Pearson isn’t a fourth-liner. The winger plays on the Canucks’ second line, kills penalties, and plays on the power play. Honestly, $3.25 million, the average annual value of Pearson’s three-year deal, is right around what you would expect to pay for the average second-line winger in recent years.

There are just a couple of issues. One is that those recent years didn’t involve a flat cap where NHL GMs are trying to pinch any penny they can. The other is that Pearson is unlikely to be an average second-line winger over the next three years.

"I don't foresee any cap problems this summer."

Benning was dismissive of any issues with the flat cap.

“I don't foresee any cap problems this summer,” said Benning, a quote that surely won’t come back to haunt him.

“All the teams are going to be living in a flat cap world for the upcoming seasons, it's a problem for the whole league, so I don't think we'll be any different,” he continued. “I think we're in a good cap situation, we'll get our young players signed here that we need to get signed and we've got some other young players that are going to be ready to come step in next year and play, so I don't think we'll have any cap issues.”

What Benning seems to be talking about is cap compliance. Certainly, the Canucks won’t have problems signing their two most important players, Elias Pettersson and Quinn Hughes, and ensuring they’re under the salary cap for next season. But cap issues go beyond mere compliance.

Based on the players currently signed for next season, the Canucks have just under $21 million in cap space. Pettersson and Hughes will take an estimated $15 million of that cap space with their new contracts. That leaves just under $6 million remaining with a roster of just 16 players.

That’s with Loui Eriksson already buried in the minors. A buyout of Eriksson would get the Canucks another million, giving them around $7 million with just three NHL defencemen signed, no third-line centre, and no improvements on the wing.

"He's gonna be as effective as he's always been."

Back to Pearson. One of the issues with paying him second-line money is that he’s arguably only on the second line because the Canucks don’t have a better winger available to bump him down the lineup.

“This season, it's not been like other seasons,” said Benning. “We're playing every second night, it's been a compressed schedule, playing the same six teams. So I think with him, once we get back hopefully in the Fall here, once we get back to playing all the teams and a regular season, he's gonna be as effective as he's always been.”

That’s another gamble. Pearson will be 29 years old at the start of next season and is more likely to see his play decline in the years to come than to be as effective as he was in the prime of his career. The most likely result is that the Canucks will be overpaying for a third-liner for three years, which is all-too-familiar for Canucks fans at this point.

But Benning has faith in Pearson, citing the veteran winger’s impeccable intangibles.

If that sounds somewhat similar to Benning’s justification for overpaying Dorsett five years ago — that he wanted young players to “rub elbows” with Dorsett — it’s because it is very, very similar. The truth is, the top-tier young players that have entered the Canucks roster in recent years, like Bo Horvat, Brock Boeser, Elias Pettersson, and Quinn Hughes, are already good pros. If you’re paying a premium for a guy who does things the “right way,” it better lead to tangible results on the ice.

"We could have moved him here at the deadline."

This isn’t meant to be anything against Pearson. He’s held his own on the second line with Bo Horvat against tough competition and, by all accounts, is a well-liked teammate. It’s just that he’s unlikely to live up to his contract.

“I think he's important to our group,” said Benning. “He's a glue guy in our room. He's an experienced player that knows what it takes to win.”

There’s one other issue with re-signing Pearson: the new deal comes just days before the trade deadline. Even though the Canucks are in position to be clear sellers, their COVID-19 outbreak likely precludes any trades for players that were on the NHL’s COVID protocol list.

Pearson, however, was injured and away from the team, so evaded the virus. Benning reportedly got calls on Pearson, but didn’t entertain them as he was intent on re-signing him.

“We could have moved him here at the deadline and got some sort of futures — pick or player — but we'd miss him if he didn't re-sign with us because he's an important guy in our group,” said Benning.