Why does Nils Höglander soak his socks with water before putting on his skates? 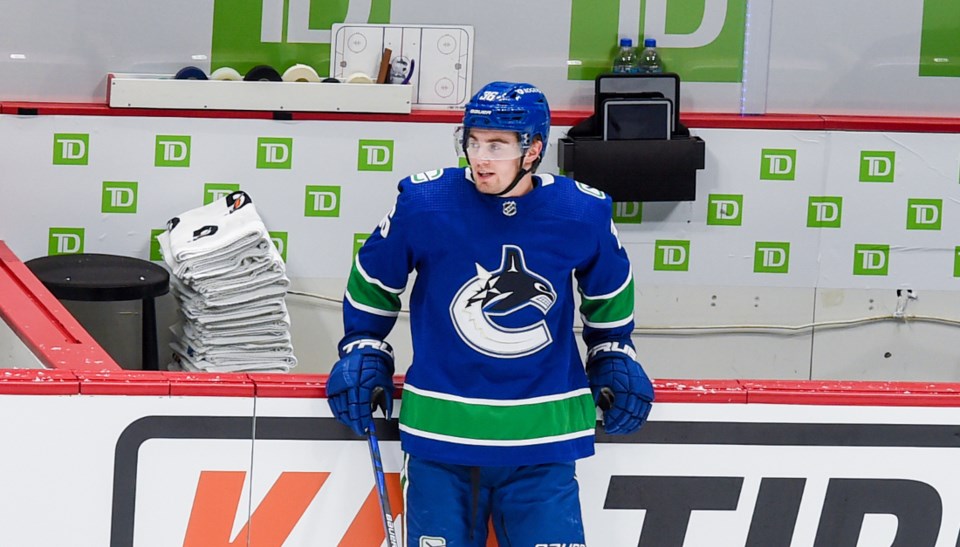 In a Vancouver Canucks season filled with dark clouds, Nils Höglander has been a distinct silver lining.

The slick Swede stepped straight into the Canucks’ top-six out of training camp, playing on the wing with Bo Horvat and Tanner Pearson. He immediately made an impact, scoring his first career NHL goal in his very first game.

Since then, Höglander has played with a few different line combinations but never relinquished his spot in the top-six. While his 7 goals and 16 points in 37 games doesn’t quite reach the heights of the recent rookie seasons of his teammates, it’s still solid second-line production and has him in the top-10 in rookie scoring this season.

Höglander has exceeded reasonable expectations this year and given Canucks fans hope that he can be a key part of the team’s core for the future.

A recent video from the Canucks, however, also revealed that Höglander is exceedingly — perhaps incurably — weird.

This ten-minute long video is mostly delightful. Höglander is pretty quiet and reserved with the media, largely because he’s dealing with not only a new team, but a new country and a language with which he’s still not fully comfortable. The video gives some insight into his personality and how his teammates view him.

But then, about two minutes into the video, there’s a moment that defies comprehension.

Höglander takes a water bottle and sprays both his socks and the inside of his skate before putting it on.

I reached out to some hockey-playing friends to see if they had ever — ever in their entire lives — seen someone spray their socks with water before putting on their skates. None of them had. All agreed that it was very weird.

It’s unclear what the benefits of a wet sock in a wet skate might be. Most people try to avoid wet socks and keeping your skates dry is important to prevent the growth of bacteria.

Perhaps he does it to prevent slippage inside the skate. It could just be a superstitious ritual — perhaps he did it as a lark as a kid and had a big game, so did it before every game after that. Or maybe Höglander just loves the feeling of wet socks.

Whatever the benefits may be, it surely comes with risks as well. Wet socks can be a potential cause of athlete’s foot or trench foot, or less serious issues, like blisters. That said, if Höglander has been doing this for a while and with moisture-wicking socks, it’s probably not an issue. It’s just rather odd.

Not that there's anything wrong with being odd and weird. In many cases, it's preferable. Being normal is such a bore.

Greener calls him "The Hog"

The rest of the video is fun without the weirdness.

On the subject of nicknames, Elias Pettersson pointed out the problematic nature of “Hoggy” because it gets confused with “Huggy,” which is Quinn Hughes’ nickname. Instead, teammates are going with Hog or Hogs. Head coach Travis Green, however, has a different nickname for him.

“Greener calls him ‘The Hog,’” said Bo Horvat, and that’s kind of great. Just the addition of the definite article makes a more mundane nickname sing. He’s not a hog, he’s The Hog.

Then there are the unicycles. Höglander has a knack for juggling while unicycling, as well as stickhandling while on a unicycle. It’s a talent shared by Pettersson, whose dad could ride a unicycle, so he taught himself to do it as well.

“The unicycle thing is just for fun,” said Höglander. “I haven’t seen Petey yet, but I will have a match with him.”

“We haven’t had a battle yet,” said Pettersson, “or done it face-to-face but from the videos I’ve seen, he’s better. Sucks to say, but...”

What would a unicycle battle look like? A test to see who can stay on the longest while juggling? A game of one-on-one unicycle hockey? Charging at each other on unicycles using a hockey stick as a lance?

On the ice, Pettersson hits the mark when he describes Höglander as a power forward. He may not have the height of a typical power forward, but he has the strength, power, and willingness to drive the net that typifies that style of game. Off the ice, Höglander, like what is probably growing in his skates, is a fun guy.

“He fits in well, guys like him. He’s a funny guy,” said Pettersson. “The more you get to know him, the more relaxed and funnier he gets. He’s an awesome guy to be around.”