Travis Hamonic's no-movement clause is understandable, but the sheer number of Canucks with trade protection is surprising.

Canucks fans know at least one of the team’s pending unrestricted free agents won’t be traded this season: Travis Hamonic.

Heading into the trade deadline, the Canucks should be sellers. Trade conversations usually start with players who will be unrestricted free agents (UFAs) at the end of the season, so teams don’t just lose them for nothing in free agency.

For the Canucks, the list of pending UFAs includes Tanner Pearson, Brandon Sutter, Alex Edler, and Jordie Benn. It also includes Hamonic, but a report from Sportsnet’s Elliotte Friedman on Hockey Night Canada made it clear that he won’t be traded because he has a no-movement clause in his contract and won’t be waiving it.

It’s a little unusual for a player on a one-year contract like Hamonic to receive a NMC, but he and his agent negotiated it into his contract for a very good reason. He wants to stay in western Canada for family reasons — he requested a trade from the New York Islanders and opted out of the 2020 NHL playoffs for the same reason — so took less than a top-four defenceman would typically take in order to get that clause. It’s the human side of hockey that sometimes gets forgotten.

Hamonic’s NMC is eminently forgivable and its addition is what kept his cap hit low enough to fit him on the Canucks roster. Other NMC and NTCs on the Canucks’ books, viewable via CapFriendly.com, make a little less sense.

11 players on the Canucks, including five of their six defencemen currently in the lineup, have some form of trade protection. Looking at the rest of the all-Canadian North Division this season, the Canucks definitely stand out.

The Calgary Flames, Winnipeg Jets, and Montreal Canadiens have six. The Edmonton Oilers have three. The Ottawa Senators have just two. The Toronto Maple Leafs are closest to the Canucks with ten, but they’re at the top of the division and expected to contend for the Stanley Cup.

In fact, no other team in the entire NHL has as many as 11 no-trade and no-movement clauses. The Canucks have the most. 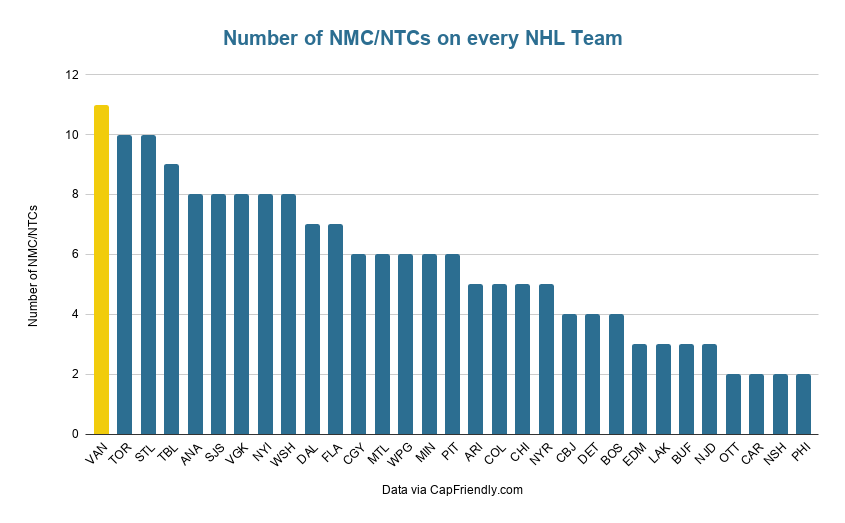 The number of no-movement and no-trade clauses in the NHL. Data via CapFriendly.com.

It’s who owns those clauses as well that is baffling. Most teams give trade protection to a few of their best players. Benning has handed out NTCs to the likes of bottom-six forwards Brandon Sutter, Jay Beagle, and Antoine Roussel and depth defenceman Jordie Benn.

The clauses aren’t overly onerous. Braden Holtby’s modified NTC is the least onerous, allowing him to specify just four teams to which he can’t be traded. Maybe there are just four teams he just really doesn’t want to be on in the entire NHL. Others allow 8, 10, or even 15-team no-trade lists. But their very existence is puzzling. Fourth-line centres like Beagle rarely get trade protection and it did little to lower Beagle’s cap hit on his four-year, $12 million deal.

As another example, Micheal Ferland didn’t just get a four-year contract from the Canucks, something no other team was willing to do given his history of concussions, he also got a full NMC for the first two years, then a modified NTC for the next two.

The best of the clauses — best in the sense of humour, not actual quality — belongs to Loui Eriksson. His six-year, $36-million contract has a full NMC in the first two years, becomes a NTC in years three and four, then becomes a modified NTC for the final two years.

We’re currently in the first of those two years, where Eriksson can submit a list of 15 teams to which he cannot be traded. Of course, the idea that his contract only allows him to be traded now — when he’s a consistent healthy scratch — is amazing. In reality, his boat anchor of a contract is the most effective no-movement clause in the world.

Hopefully, the Canucks’ other clauses won’t prevent the team from making trades before the deadline to improve the team for the future.