On a Canucks team with limited winger depth, Jimmy Vesey could have an outsized opportunity

Where could the Canucks' recent waiver wire pickup fit?

Jimmy Vesey is a fairly average NHL forward. Unlike several similar players on the Vancouver Canucks, he’s paid like it, making him a savvy pickup from the waiver wire.

The Canucks claimed Vesey off waivers on Wednesday, hoping he would be able to play in that night’s game against the Ottawa Senators. Regrettably, after he drove more than four hours to get to the game, his work-permit paperwork couldn’t be processed in time for puck drop.

When he does get in the lineup, there are multiple places where he could slot in.

With several other players injured — Elias Pettersson, Jay Beagle, Antoine Roussel, and Justin Bailey — there are opportunities on multiple lines. Vesey could play as low as the fourth line, where he spent significant time with the Toronto Maple Leafs before being waived, or as high as the first line alongside former World Junior and New York Rangers teammate J.T. Miller.

“I know Millsy very well,” said Vesey on Thursday. “World juniors, we won the gold medal, and then played a year and a half in New York and got pretty close there. He was in Boston for a couple days this summer and we had dinner and we were supposed to golf but got rained out.”

“It's great to have a familiar face in the locker room,” he added. “He was one of the first people that reached out.”

Where Vesey could fit on the Canucks

Vesey had the best years of his career with the Rangers, occasionally on a line or on the power play with Miller before he was traded to the Tampa Bay Lightning. Vesey scored 50 goals across three seasons in New York, but hasn’t matched that goal scoring with either the Buffalo Sabres or Leafs over the past two seasons.

Some of that is opportunity. Vesey barely played on the power play with the Sabres and was stuck lower down the lineup on a talented Leafs team. Eventually, there was just no room left in the Leafs lineup and Vesey was put on waivers.

“It’s shitty when you get put on waivers,” said Vesey. “No one really wants to experience that. But at the same time, I’ve been claimed by Vancouver and to me that means that they wanted to bring on another contract and they wanted me, so I’m really excited for it.”

Vesey could definitely get more opportunities to play on the Canucks.

“I'm looking forward to playing more, hopefully,” said Vesey. “I talked to the coaches yesterday, just trying to figure out the systems and then hopefully I can get up to speed quickly and contribute to the team.”

Along with the other injuries, Tanner Pearson left Wednesday’s game with an apparent leg injury. If he isn’t ready to play on Friday, the Canucks will need someone else to play on the wing alongside Bo Horvat.

The Canucks could turn to Tyler Motte, Zack MacEwen, or Jayce Hawryluk to play with Horvat, or they could turn to the newly-arrived Vesey, who already has top-six experience in his career. Pearson’s absence leaves a hole on the first power play unit, which could be filled by Vesey or by someone from the second power play unit, which would in turn open up an opportunity for Vesey.

Even if Pearson can play, Vesey could be an option to cycle into the top-six in place of Jake Virtanen, who has no points in his last six games after a two-goal outburst against the Leafs.

What do the facts say?

While Vesey could find a home in the Canucks top-six, that's not to say that he's an ideal fit as a top-six forward.

One former NHL scout described Vesey as a “vanilla player,” who doesn’t have any notable strengths to his game, but neither doesn’t have many weaknesses either. Considering he’s making just $900,000 per year, he’s the type of player that most teams have filling out their bottom-six.

The analytics tend to agree with his assessment as “vanilla,” which isn’t the worst thing — after all, it’s the finest of the flavours. He’s had a corsi percentage below 50% every season, albeit with some not-great Rangers and Sabres teams, and his isolated impact heat map from HockeyViz shows a player who is slightly above average offensively at even strength and the power play, but below average defensively. 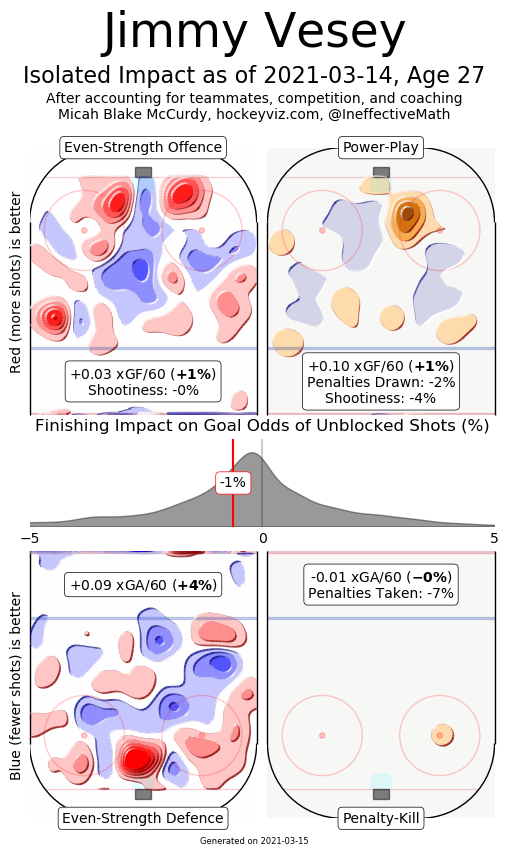 That said, Vesey has a solid shot, good size at 6’3”, decent speed, and is better defensively on the penalty kill than he is at even strength. That’s enough versatility to make him a worthwhile addition to the Canucks lineup. From there, it’s a matter of chemistry — sometimes a player can click with a certain combination and a line becomes more than the sum of its parts.

Adding Vesey to the lineup means the Canucks now have two Hobey Baker winners. The award, given to the top player in college hockey, was won by Adam Gaudette in 2018, two years after Vesey won it in 2016.

“I’m definitely familiar with him,” said Vesey of Gaudette. “We have a lot of mutual friends, the Boston hockey world is pretty small and a lot of guys I knew from growing up played with him at Northeastern.”

When Vesey won the Hobey Baker, he beat out another one of his new teammates, Thatcher Demko, who was a finalist in 2016. Demko, however, got the better of Vesey at the NCAA Tournament, as he helped Boston College eliminate Vesey and Harvard in the first round.

“That was the last game in my college career,” recalled Vesey. “From what I remember, BC had a really good team and probably was the better team. We put on a little bit of a push, but obviously Thatcher made a lot of saves.”

“I’ve taken five years of Mandarin Chinese and hope to be fluent by the time I finish college,” said Vesey back in 2013. “I took four years of Chinese in prep school, and it turned out to be my favourite subject. I got pretty good at it, and my teacher put me in the application process for the National Chinese Honor Society (NCHS). I had to give a resume and stuff like that and was eventually accepted.”

In an interview a couple of years ago, Vesey admitted that he’s “a little rusty at this point” but can still read, write, and speak Mandarin. Perhaps he’ll get more of an opportunity to use the language in Vancouver. According to the 2016 census, Vancouver has 373,000 residents whose mother tongue is Mandarin or Cantonese.

Finally, the car that Vesey drove so far to Ottawa only for him to be unable to play? It wasn’t a rental — it was Vesey’s car.

“It’s actually at the rink, the Canadian Tire Centre,” said Vesey. “We’re going to coordinate to have it shipped to wherever I would like.”

At least the car won’t be abandoned like Artem Chubarov’s.