Did Höglander's umlaut save the Canucks’ season? 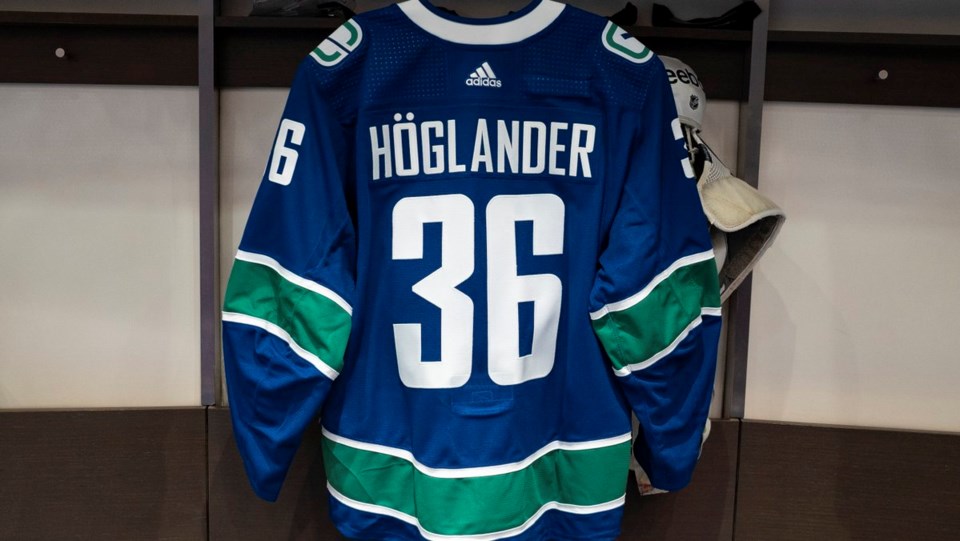 When the Toronto Maple Leafs flew into Vancouver, the Canucks were at a low point. They had won just one of their last six games and were thoroughly outplayed in their last game against the Winnipeg Jets. To top it off, their franchise forward, Elias Pettersson, left practice early and was later revealed as day-to-day with an upper body injury.

The last thing they needed was a pair of games against the best team in the all-Canadian North Division.

Or maybe it was exactly what they needed.

The Canucks contained the Leafs like a hefty bag, limiting the second-highest scoring team in the league to just three goals across two games. Thatcher Demko was excellent in both games, making 68 saves on 71 shots. Jake Virtanen suddenly came alive in the first game, scoring two big goals. In the second game, J.T. Miller, Brock Boeser, and Bo Horvat led the comeback in the third period.

Of course, the real reason the Canucks won those games wasn’t Demko, Virtanen, or the team’s stars stepping up in the absence of Pettersson. The real reason they won is because of two dots.

Two dots make all the difference

No, not the infuriatingly addictive puzzle game, but the two dots above the “o” in Nils Höglander’s name. After starting the season with “Hoglander” on the back of his jersey, the rookie winger had his name spelled correctly to kick off the team’s current homestand.

Since putting the correct spelling on Höglander’s jersey, the Canucks are 2-0 — or rather, 2-Ö. Evidently, proper spelling is good luck.

Not only that, but Höglander scored the insurance goal in the second game, sending a rocket of a shot over the shoulder of Frederik Andersen. It was his fifth goal of the season, but the first where he cleanly beat a goaltender with a wrist shot. His goals have mainly come from banging in rebounds or tipping point shots from in front of the net. Perhaps having his real name on his jersey gave him a shot of confidence?

What a difference an umlaut can make.

Except it’s not an umlaut. Not exactly.

The accent that looks like two dots above a letter is called an umlaut in Germanic languages, although truthfully most people in North America are familiar with it from its use in band names like Motörhead and Hüsker Dü, making it the most metal diacritic.

Thus, when German rookie Tim Stützle has the accent on the back of his jersey, it’s an umlaut. He’s had the umlaut right from his debut this season, though that wasn’t always going to be the case.

“Pierre Dorion came up to me and asked if I wanted my German spelling on my jersey. At first, it was not allowed and we were not able to do that. But right now, we were able to,” said Stützle at the start of the season. “In Germany, that’s my real name and I like that. And I think it’s great that I have the umlaut right now in my name.”

The Swedish language doesn’t have umlauts, however. Instead, “ö” is considered a separate letter in their alphabet. In other words, if you spell his name “Hoglander,” you’re not just missing an accent — you’re spelling it with a completely different letter.

Fans have embraced the proper spelling of Höglander’s name on social media and now the Canucks have followed suit. It appears to be the first time a Canucks jersey has featured a diacritic on the back, though they have had plenty of other players whose names in their home countries feature them.

There are a couple of former goaltenders, Jacob Markström and Eddie Läck. Then there’s one of the best defencemen in Canucks history, Mattias Öhlund. Or how about one of the players whose number resides in the Rogers Arena rafters, Markus Näslund?

None of those players had their names spelled correctly on the back of their jerseys in Vancouver, so it’s interesting that things have changed for Höglander.

"Not allowed" to spell their names correctly?

It’s interesting to note that Stützle said he was initially “not allowed” to have the umlaut on his jersey, but then things evidently changed. In truth, NHL teams have been able to put proper diacritics on the back of jerseys for years.

The Montreal Canadiens have made an effort to put diacritics on the back of jerseys in recent years thanks to their longtime equipment manager, Pierre Gervais.

“I like to write things the right way,” said Gervais, so Daniel Brière had his name spelled correctly on his jersey for the first time in his career when he joined the Canadiens in 2013.

But even before that, some teams tried to get names right. When the Šťastný brothers — Marián, Peter and Anton — played for the Quebec Nordiques in the 1980’s, they had the proper diacritics on their jerseys, or at least a close approximation. Even earlier than that, when Denis Dupéré played for the Colorado Rockies in the 1976-77 season, they used apostrophes in place of the accents.

Compared to those methods, modern jersey production methods make it incredibly easy to use proper diacritics. With two rookies, Stützle and Höglander, getting their names spelled correctly, perhaps it will start a new trend in the NHL.

For those Canucks fans that have already bought a Höglander jersey with the old spelling, the Canucks Team Store has been going through the replies to the announcement on Twitter, offering to add the diacritic at no charge.