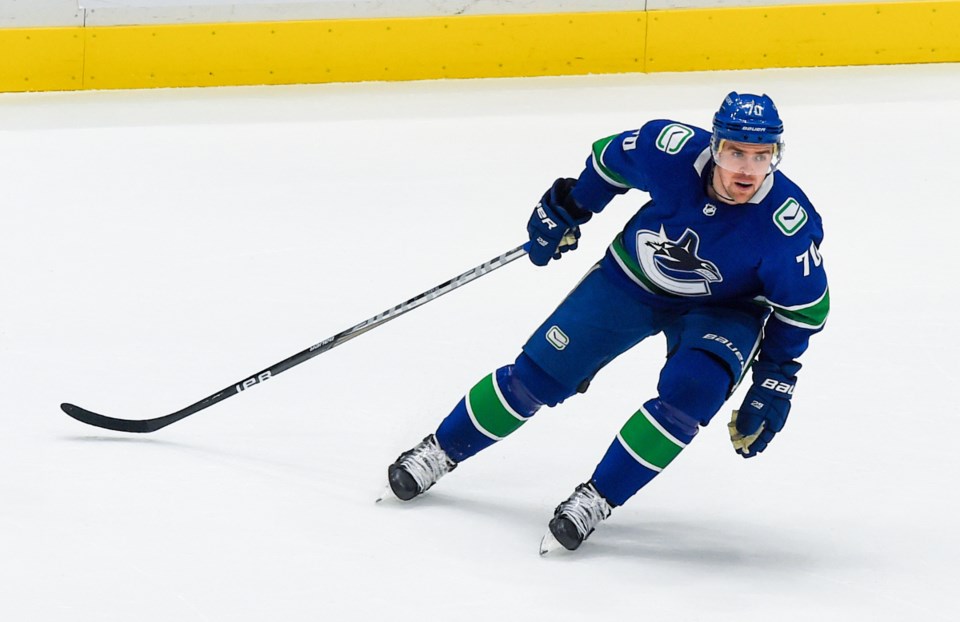 The Canucks shouldn't be trying to re-sign Tanner Pearson, they should be trying to trade him.Bob Kronbauer / Vancouver is Awesome

Tanner Pearson at least partially rescued one of Jim Benning’s worst moves as general manager of the Vancouver Canucks.

The trade for Erik Gudbranson cost the Canucks what could have been their future third-line centre in Jared McCann, not to mention 2nd and 4th-round picks. Gudbranson proved to be just as bad in Vancouver as opponents to the trade had warned. By the end of his time with the Canucks, even Gudbranson admitted, “I don't think I played very well.”

Getting Pearson from the Pittsburgh Penguins in return for Gudbranson was a coup for Benning. While it didn’t make up for the original trade, it did give the Canucks a winger they could slot in on their second line. After struggling in Pittsburgh, Pearson immediately put up 9 goals and 12 points in 19 games with the Canucks after the trade.

Since then, Pearson has been a solid player for the Canucks, playing some good minutes in a match-up role for the Canucks alongside Bo Horvat. He scored 21 goals in 69 games last season, six of them into an empty net, as he was regularly called upon to close out games in the final minutes.

That’s a nice return for a defenceman that seemed completely untradeable. But it’s time to move on.

Jim Benning definitely doesn’t think it’s time to move on from Pearson. At his press conference on Friday, he made it clear that he’s prioritizing Pearson over other players that need new contracts.

“Tanner is an important player in our group. I think since we traded for him, him and Bo have been real good together,” said Benning. “He's a real pro, like, he leads by example, he plays the right way, he's strong on the walls, he gets to the front of the net. But the way he handles himself on a day-to-day basis is a guy that we want our younger players around. He's won a Stanley Cup, I think he helps with our culture in our room and in our group.

“So we're gonna sit down with his agent Joe Resnick and just see if there's some common ground that we can get to that makes sense for him and for us and we're going to try to re-sign.”

If the emphasis on having won a Stanley Cup is ringing alarm bells, that’s because it’s the same rationale used when the Canucks overpaid Jay Beagle in free agency.

Over the next two years, the Canucks have a lot of money coming off the books, but you can’t get rid of bad contracts if you keep signing new ones.

The Canucks will need all of their cleared cap space to re-sign their trifecta of young stars coming off their entry-level contracts: Pettersson, Hughes, and Thatcher Demko. In order to build a Cup-contending team around them, they’ll need to be careful with their remaining cap space.

That means they shouldn’t prioritize a 28-year-old middle-six winger, even if they like him as a player and a person. At the start of his new contract, Pearson will be 29 and past his prime, likely to decline in the coming years.

Keep in mind, the Canucks will only have Hughes, Tyler Myers, and Nate Schmidt under contract on defence as proven NHLers. Unless they want to gamble on prospects filling out half of their top-six, the Canucks will need to spend money on their defence.

As well, the team’s bottom-six forwards will still feature many of the same faces: Beagle, Antoine Roussel, Loui Eriksson, Tyler Motte, Zack MacEwen, and Adam Gaudette — who will also need a new contract.

If the team wants to upgrade on defence, improve their bottom-six, and also maybe find some more scoring, they’re going to have to be savvy with their signings.

In reality, Pettersson and Hughes could potentially cost much more, but let’s roll with these numbers. That leaves just $10-11 million to spend on the defence, bottom-six, and some scoring help.

In other words, the Canucks can’t afford to re-sign a declining 29-year-old winger like Pearson to a $3+ million contract. That’s simply far too big a chunk of the team’s remaining cap space. Pearson not only shouldn’t be a priority, they shouldn’t re-sign him at all except on a cheap, short-term deal.

It doesn’t help that Pearson’s point production has dropped off this season. Pearson has just 5 goals and 9 points in 30 games, on-pace for 14 goals and 25 points if this was a full 82-game season, much less than the 45 points he had in just 69 games last year.

The truth is, that kind of point production is replaceable for cheaper than what Pearson will likely cost. The Canucks can either look within — Vasily Podkolzin is set to arrive next season — or look for bargains in free agency or on the trade market without locking themselves into a three-year deal with Pearson. The looming Seattle Kraken expansion draft could open up some trade possibilities as teams wheel and deal to protect their core players.

This isn’t the same as the Tyler Toffoli situation, where the Canucks chose not to (or ran out of time to) re-sign a quality, goal-scoring winger. Pearson simply isn’t as good a player and will be easier to replace than Toffoli.

Time for a trade

The biggest reason the Canucks shouldn’t be trying to re-sign Pearson right now, especially before the trade deadline, is that he is one of the few players on the Canucks roster that is clearly expendable yet could still get a solid return in a trade.

If the Canucks are going to get better, they can't keep spinning their wheels with the same roster — they need to cut away the inessential parts of the team to find the core, then build around that core.

On a better team, Pearson probably isn’t a top-six forward, but could still provide quality minutes and depth scoring in a third-line role. For all of the reasons Benning mentioned — playing the right way, winning puck battles, going to the net, and Stanley Cup pedigree — other NHL GMs will be willing to pay to acquire Pearson.

Perhaps that means adding a prospect to the system that could contribute in two years, the timeline for when Benning suggests the Canucks will be a contender. It could also mean adding a 2nd or 3rd-round pick to bolster the prospect pool further down the line, so the Canucks continue to have a pipeline of players on entry-level contracts to add to the roster, an essential part of cap management.

None of this matters, however, if the Canucks don’t come to the realization soon enough that they need to be sellers in the trade market this season.

As much as the Canucks’ recent three-game win streak was enjoyable for fans, it barely made a dent in their playoff chances. They’re still sixth in the North Division by points percentage and simply have too much ground to make up.

In order to reach 62 points — a conservative cutoff for making the playoffs this season — the Canucks will need 36 points in their remaining 26 games. That’s a points percentage of .692 or, for example, a 16-6-4 record.

Do the Canucks seem capable of that kind of run?

And yet, Benning is insisting that the team will take things “day-by-day.”

“The trade deadline’s five weeks away and we’ll wait ‘til we’re closer,” said Benning. “I’m talking to other general managers at the moment, I talked to two or three guys yesterday to make preparations for the trade deadline, so we’re prepared, but we’re gonna just wait and see where we’re at as we get closer to the deadline before we decide what we’re going to do.”

If, as the team gets closer to the deadline, Benning re-signs Pearson, he’ll have already decided what he’s going to do.