The Canucks forward appeared on John Scott's "Dropping the Gloves" podcast and talked about taking Brock Boeser down a peg or two.
Mar 25, 2021 5:19 PM By: Daniel Wagner 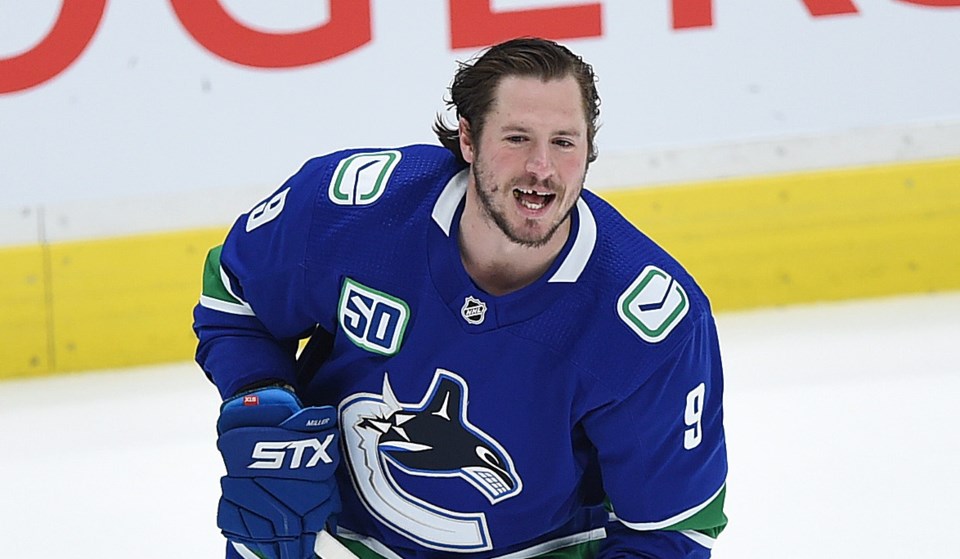 The former NHL enforcer hosts a podcast called Dropping the Gloves where he talks about his own life and career in the NHL and also interviews current NHL players. In an interview with Tyler Myers of the Vancouver Canucks last year, Scott suggested that Boeser is the most handsome player in the NHL.

“I skated with him in the summer for a few years when he was in high school,” said Scott. “He would come out, there was this kid with a cage on just lighting the lamp and then he would take his bucket off and I’d be like, ‘This is not fair.’ Like, he’s absolutely gorgeous.”

“I’m straight,” he added, “but when he walks into a room, I’m like, you know what, maybe...I have to question myself real quick. No no no no no, I’ve got six kids, I’m straight, I’m straight.”

Myers could only laugh and agree. Canucks fans certainly seem to think that Boeser is handsome and Michael Bublé built a comedy bit around his handsomeness when he hosted the 2018 Juno Awards.

One of Myers’ Canucks teammates, however, suggested that Boeser isn’t handsome at all and it happened to also be on Scott’s Dropping the Gloves podcast. J.T. Miller joined the one-time All-Star Game MVP for a half-hour discussion of Miller’s career and Scott couldn’t help but once again bring up Boeser’s beauty.

“Is it distracting to play with Brock Boeser because he’s so handsome?” asked Scott towards the end of the podcast as Miller laughed. “Does it take you off your game when you’re jumping off the bench and you kind of look away from the play because he’s just so hypnotizing?”

“You know what, I’m harder on him than anyone on the team, on and off the ice,” said Miller. “I tell him he’s ugly as many times as I can.”

It’s a hilarious moment because it’s just so unbelievable. Miller went on to say that he does it for a reason: to keep Boeser from getting too full of himself.

“With the young guys these days, the last thing you need is to put more air in the tires, pumping them up,” said Miller. “I’m fully degrading and breaking him down just to keep him to sea level as  much as I possibly can.”

But Miller couldn’t keep up the charade for long.

“No, we all know he’s a good-looking cat, that’s the only thing I might give him,” he said. “I’m not going to give him anything more”

Here’s the moment if you don’t want to listen to the whole podcast.

The whole podcast is worth the listen, however. Scott asks insightful questions and isn’t afraid to be blunt — “You guys just laid a deuce in the first month of the season” — and Miller is candid about his time with both the New York Rangers and Tampa Bay Lightning, as well as with the Canucks. There’s some great insight into the current season, as well as some of the behind-the-scenes elements of being an NHL player.

One of the insightful moments comes when Miller talks about what it’s like playing with no fans in the building.

“It sucks with no fans. I feel like when they come back, it’s going to be crazy. Like, we’re going to be nervous again to go out and play,” said Miller. “There’s no momentum swings emotionally in the building anymore. You can carry play for a couple minutes in a row, but there’s no fans — I tell you what, the silence of a home crowd and the rocking building of a home crowd is definitely a huge factor.

On a Canucks team with limited winger depth, Jimmy Vesey could have an outsized opportunity
Mar 18, 2021 4:46 PM
Comments