Micheal Ferland won't be joining the Canucks at training camp

Canucks training camp roster initially included Ferland, but his agent confirms he won’t be in Vancouver.

Micheal Ferland’s NHL career might not be over just yet, but he won’t be with the Vancouver Canucks to start the 2020-21 season.

The Canucks released their training camp roster on Wednesday with the 41 players expected to be at camp, which starts on January 3rd. That roster includes Micheal Ferland, who played just 16 games for the Canucks between the regular season and playoffs in 2019-20.

According to his agent, Jason Davidson, Ferland won’t be in Vancouver for the start of training camp and it seems all but certain that he will be placed on Long-Term Injured Reserve (LTIR) to start the 2020-21 season. The Canucks confirmed that Ferland would undergo his physical with team doctors via video call before he could be placed on LTIR.

Ferland already had a significant concussion history before he signed with the Canucks and suffered another concussion just 12 games into the season during a fight with Kyle Clifford of the Los Angeles Kings.

Though Ferland tried to return three times throughout the season, he was forced to leave each time with “concussion-like symptoms.” In December he felt dizzy after throwing a hit two games into his return. In February, his conditioning stint in the AHL with the Utica Comets lasted less than one game. His return for the playoffs in August lasted less than two games before he was declared “unfit to play.”

According to Ferland in July, before he returned for the playoffs, his issue was with his vestibular system. That’s a part of the inner ear that is responsible for balance and spatial orientation. When your vestibular system gets disrupted or traumatized by a head injury, it can cause dizziness and vertigo.

“I just need to rewire my vestibular system,” said Ferland. “I haven’t had many symptoms, but I just need to continue to get out there with more bodies, and full pace and contact.”

Unfortunately, the symptoms returned. At this point, Ferland’s long-term health has to be his primary concern.

For the Canucks, Ferland going on LTIR would solve several salary cap issues and free up space to potentially add a player or two in free agency, perhaps a right-side defenceman like Travis Hamonic. As of yet, there’s no indication that the Canucks will be adding any more players.

There will still be 41 players at training camp, however. Prospect Lukas Jasek was initially left off the roster by mistake, but will be participating in training camp in Vancouver.

There are no other surprises on the roster — no undrafted invitees or players on professional tryout agreements. With a shortened training camp before the start of the season on January 13th, the Canucks will need to make roster decisions in a hurry.

Here is the Canucks roster for training camp, albeit with Ferland and without Jasek. 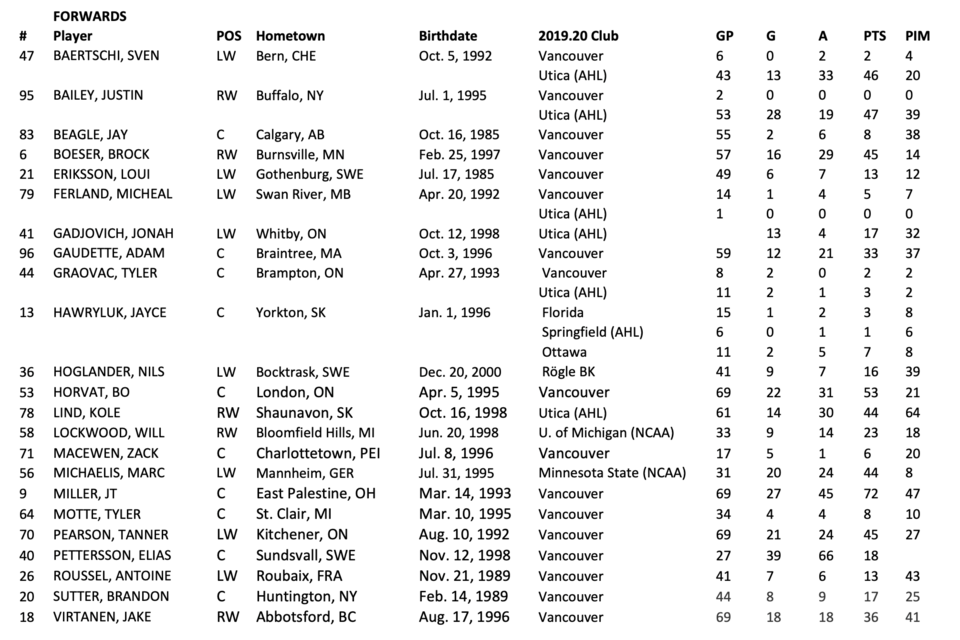 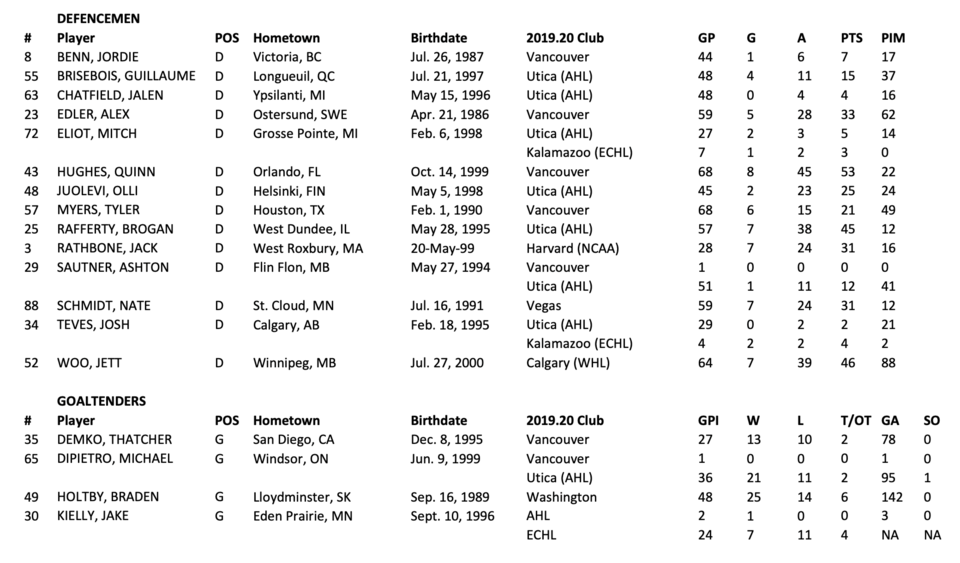