The list of affected players has steadily risen since Tuesday
Apr 3, 2021 3:17 PM By: Megan Lalonde 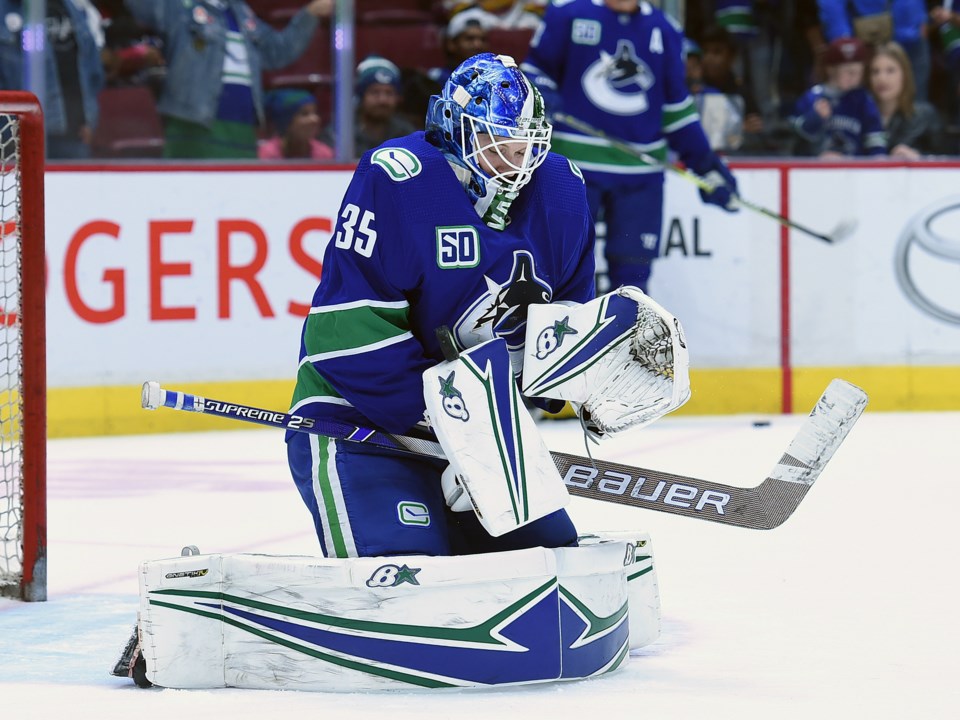 Thatcher Demko, pictured in net for the Vancouver Canucks during a preseason game on September 26, 2019, is one of seven Canucks players who entered NHL COVID protocols on Saturday, April 3. Photo: Dan Toulgoet

The coronavirus outbreak affecting the Vancouver Canucks continued to worsen Saturday, as seven more players were added to the NHL's COVID-19 protocol list.

Travis Boyd, Thatcher Demko, Bo Horvat, Jayce Hawyrluk, Tyler Motte, Tyler Myers and Brandon Sutter are the latest players to find their names on the list, based on testing and contact tracing. They join five of their teammates who entered protocol on Friday, April 2—Alex Edler, Braden Holtby, Quinn Hughes, Zack MacEwen and Antoine Roussel, in addition to one unnamed player from Vancouver’s taxi squad.

The Canucks' current COVID-related troubles began Tuesday, when Adam Gaudette was pulled from the ice mid-practice after testing positive for the virus 24 hours prior. Defenceman Travis Hamonic on Wednesday became the second Canuck to enter protocol, along with a member of the team's coaching staff who has not been identified.

Saturday's update brings the team's total number of affected players to 14, plus their coach.

On Thursday, the NHL made the decision to postpone four of the team's games, until April 8, with players able to return to practice on Tuesday, April 6 at the earliest. That timeline could change pending additional test results.

Throughout the hockey season, the NHL has used its COVID protocol list to share names of players who have been rendered "unavailable” to practice, travel or play for their respective clubs due to the virus.

These “COVID Protocol Related Absences” can come as a result of an initial positive test—a player receives a second test to confirm the first, and if that second test is negative, he'll be tested again. Alternatively, players who are experiencing symptoms or players who have been identified as high-risk close contacts of a confirmed positive case will also be required to isolate under the league's COVID protocols.

So far, the NHL has rescheduled one game between the Ottawa Senators and Winnipeg Jets in response to the Canucks' paused season. Originally scheduled for May 7, that game will now take place on Monday, April 5.

'[A]ll you ever want is to protect your children'

In response to a minority of fans who have taken to social media with complaints about the postponed Canucks games, some players' family members have turned to Twitter to share their concerns and remind these fans that the professional athletes are, in fact, real people with loved ones who are similarly affected by the ongoing outbreak.

MacEwen's mom, Juliana, tweeted: "[A]ll you ever want is to protect your children and keep them safe. When that is completely out of your control it paralyzes you."

As a mom all you ever want is to protect your children and keep them safe. When that is completely out of your control it paralyzes you. Please join me in sending all of your prayers, positive thoughts, and strength to our boys and all of their families #Canucks

Gaudette's wife, Micaela, similarly opened Twitter to share an update on both her and her husband's conditions on Thursday, three days after he initially tested positive. "I’ve been feeling fine other than being tired and I just woke up with a bad headache," she wrote. "My hubby isn’t in great shape but I’m taking good care of him! Thank you to all that have said kind things to us during this time."

However, she added in a separate tweet, "People on Twitter are ruthless. A human being gets sick with a virus we don’t know much about and [ya'll] are angry at him because you cant watch a game on tv?"