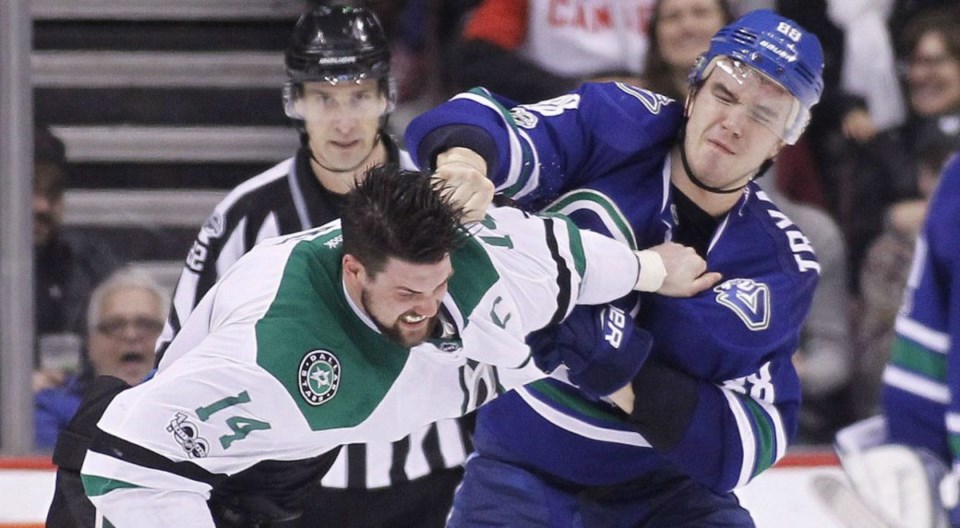 It genuinely surprises me how many Vancouver Canucks fans believe that Nikita Tryamkin can come back and instantly improve the Canucks’ defence corps.

Tryamkin, a 3rd round pick by the Canucks in the 2014 NHL Entry Draft, played 79 games with the Canucks: 13 in 2015-16, and 66 in 2016-17. Fans were intrigued by his size — at 6'7", Tryamkin was the tallest player in Canucks history until the Canucks signed Tyler Myers last summer — along with his smooth skating and decent puck skills.

At the conclusion of the 2016-17 season, however, Tryamkin announced that he was leaving the NHL to go back home to Russia to play for Yekaterinburg Automobilist of the KHL.

The reasons cited for his departure varied from a lack of ice time under former Canucks head coach Willie Desjardins, all the way to reportedly not liking the “smell of weed” that he feels comes with living in Vancouver.

In his first two seasons in the KHL, Tryamkin was named to the KHL all star team, and in his second year, he was named team captain of Automobilist. Things were looking up for the man who always has to look down.

Unfortunately, the third and final season on his contract hasn’t gone so great for the altitudinous d-man, as he was stripped of his captaincy and has been given a lesser role with less ice time. As outlined by the Athletic’s Harman Dayal, Tryamkin’s coach in Russia felt that he had three or four other defencemen who were giving more effort, and cited this as a main reason why Tryamkin’s role has declined.

If there’s one thing that Canucks head coach Travis Green hates more than anything, it’s a player who doesn’t put in maximum effort, all the time.

On top of this, Tryamkin will be 26 at the beginning of next season, and the Canucks have defencemen who are younger, have done their time in the AHL with the Comets, and are deserving of a shot, like Brogan Rafferty and Olli Juolevi.

Tryamkin coming back would certainly not be the worst thing in the world for the Canucks. In a depth role, Tryamkin is a no brainer for the Canucks to bring back. The only problem is that Tryamkin seems to have his sights set on the NHL and may not take getting sent down to the AHL well. Therein lies the problem.

In his first year as a pro, Rafferty has lit the AHL on fire and been one of the most dominant rookies in the league, but what if Rafferty had demanded a roster spot from the Canucks, and refused to go down to the minors? He certainly wouldn’t be having the same success he’s experiencing right now, which helps to boost a player’s confidence drastically.

If Tryamkin can defy all odds and legitimately earn a spot out of training camp with pure dominant play, this would hands down be the best case scenario for the Canucks. I’d love to eat my words on the “Nikita Tryamkin is not an NHL ready defenceman” take.

Tryamkin himself recognizes that he could have further developed his skillset had he stayed with the Canucks.

“In Vancouver, they tried to develop him as much as they could. The Canucks tried to fix his skating first of all, to try to get him to another level,” KHL insider Igor Eronko told The Athletic. “They tried to teach him how to play with the puck and offensively he liked that, but he didn’t recognize at the time that he would learn more and more and more if he had stayed.”

Unfortunately for both the Canucks and Tryamkin, you can’t change the past. All the Canucks can do now is hope Tryamkin can come back and show that he’s willing to do the work and become the towering shutdown defenceman the organization once hoped he could become. Maybe Tryamkin recognizing this is a sign of the Russian blueliner maturing, which is certainly a welcome sight to see for a Canucks team whose head coach seldom hands out minutes to players who aren’t buying into his system.

But the only way the Canucks should bring back Tryamkin is if he agrees to start with the Utica Comets in the AHL.

In his first go-around with the Canucks, Tryamkin had an AHL out clause that allowed him to either refuse to go the AHL or bolt back to the KHL if the Canucks forced a move. It came into play during the 2016-17 season. Canucks GM Jim Benning confirmed that he tried to send Tryamkin down to the AHL, but he and his agent refused.

This time around, the Canucks can't allow any such language in Tryamkin's contract. If he wants to get back to the NHL, he should have to work his way back.

In Utica, Tryamkin could potentially get top pairing minutes and would be able to work hard at attempting to salvage what’s left of his development years. It will give him the opportunity to prove himself to the Canucks organization and earn his way to the NHL, the same way Rafferty is right now.

Utica is the best option for both the Canucks and Tryamkin because the larger than life defenceman almost certainly won’t step in and immediately improve the Canucks defence out of training camp. If all goes well, Tryamkin can become a third-pairing defenceman that can contribute on the penalty kill, but it will likely take time for him to get to that level.

Tryamkin was an okay defenceman with intriguing potential playing on a very bad Canucks team, but times have changed since then. The Canucks are quickly turning into a playoff contender, and have the groundwork of their young core laid out. The towering blueliner will need to prove his worth to the organization to get the playing time he feels he deserves.

The Farmhouse: Kole Lind’s resurgence as the most dynamic young playmaker in the Canucks system
Jan 22, 2020 11:07 AM
Comments
We welcome your feedback and encourage you to share your thoughts on this story. We ask that you be respectful of others and their points of view, refrain from personal attacks and stay on topic. To learn about our commenting policies and how we moderate, please read our Community Guidelines.