Would you put money on Holtby winning the Vezina Trophy next season?
Nov 17, 2020 3:54 PM By: Daniel Wagner 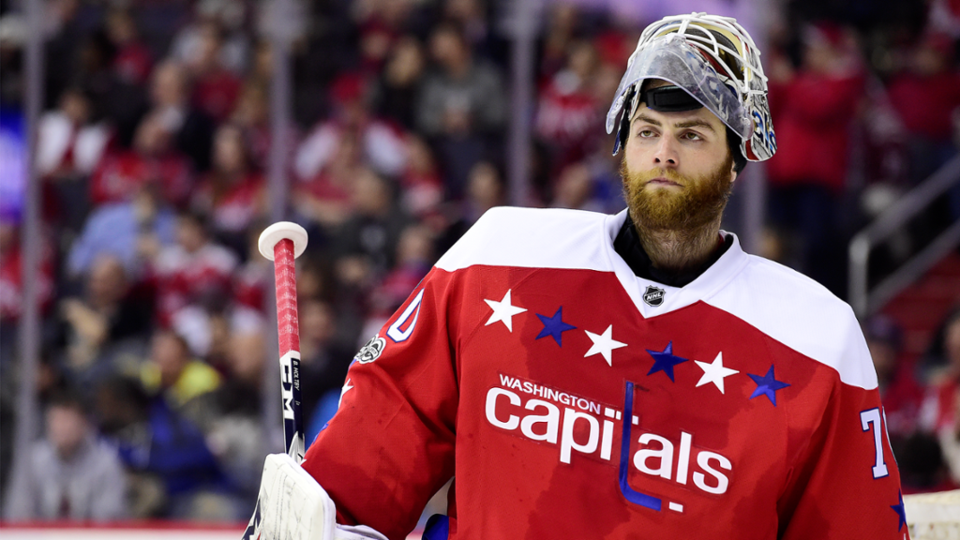 For the last two seasons, Jacob Markstrom has been voted the Canucks’ most valuable player. He stole games the Canucks should have lost with his stellar goaltending and carried them to their first playoff appearance in five years.

In fact, Markstrom was arguably the best goaltender in the entire NHL last season. When you take into account the quality of scoring chances Markstrom faced including factors like pre-shot puck movement and screens, Markstrom saved the Canucks 20.16 goals last season compared to an average NHL goaltender according to data collected by Clear Sight Analytics.

Markstrom had clearly earned a raise from the $3.67 million per year on his previous contract, but the Canucks couldn’t afford to give him that raise. Instead, like several other Canucks free agents, Markstrom signed with the Calgary Flames for six years at $6 million per year.

It’s understandable why the Canucks didn’t sign Markstrom to that kind of deal. They didn’t have much cap space available and they wanted to avoid the possibility of losing Thatcher Demko to the Seattle Kraken in the expansion draft next year. Markstrom’s no-movement clause means the Flames will have to protect him in the expansion draft and he likely demanded the same protection from the Canucks.

To replace Markstrom, the Canucks signed Washington Capitals goaltender Braden Holtby to a two-year deal worth $4.3 million per year.

At one point in his career, Holtby was consistently one of the best goaltenders in the NHL, but he’s coming off a rough season where he posted an .897 save percentage, the first time in his professional career that he’s fallen below .900. Even if Demko takes a step forward as the 1B to Holtby’s 1A, it seems clear that the Canucks’ goaltending will take a step backward next season.

Oddsmakers have released the Vezina Trophy odds for the 2020-21 season and Holtby is tied for the 9th-best odds to win the award. Markstrom is tied for 13th.

According to SBD, a sports betting site that tracks odds from multiple sportsbooks, Andrei Vasilevskiy, Connor Hellebuyck, and Tuukka Rask are co-favourites to win the 2021 Vezina at +500 odds — in other words, a successful $100 bet would win $500. That makes sense, as the three goaltenders were the finalists for the 2020 Vezina, with Hellebuyck taking home the prize with 19 of 31 first-place votes.

Markstrom, however, finished fourth in Vezina voting last season but certainly isn’t fourth in Vezina odds for next year. Instead, he’s +1800 on the moneyline, the same odds as Ben Bishop, Semyon Varlamov, and Jordan Binnington.

Holtby has slightly better odds at +1500. That's despite legitimately being one of the worst goaltenders in the NHL last season.

There are a few reasons why that might be the case. One is simply that he’s won the Vezina before. Holtby was dominant in the 2015-16 season, posting a .922 save percentage across 66 starts and winning 48 games, 8 more than the next best goaltender. He deservedly won the Vezina in 2016, then was runner-up for the Vezina the following season with an even better .925 save percentage.

Markstrom, on the other hand, doesn’t have that Vezina-winning pedigree. His fourth-place finish last season came without a single first-place vote and that’s the closest he’s come. Prior to coming to Vancouver, in fact, Markstrom was beginning to look like a bust — a top-tier prospect that could dominate the AHL but never break through to the NHL.

Reputation shouldn’t necessarily play a role in Vezina voting, but it certainly can affect the odds. Holtby has done it before; Markstrom hasn’t.

The other factor is Canucks goaltending coach Ian Clark.

Markstrom’s development from decent starting goaltender to one of the best in the NHL over the past two seasons has come under the tutelage of Clark. While Markstrom’s talent and drive should be considered the primary reason for his success, it’s hard to dismiss the influence of Clark, who previously coached Sergei Bobrovsky to two Vezina Trophies with the Columbus Blue Jackets.

The Canucks are confident Clark can help Holtby bounce back from his struggles the past couple of seasons and there are good reasons to believe that to be the case. Holtby’s downturn over the last few seasons coincides with a change in goaltending coach in Washington from the legendary Mitch Korn.

Or perhaps the Vezina oddsmakers simply see the Canucks as a better team than the Flames, who lost in the first round of the playoffs while the Canucks made it to Game 7 of the second round. It is extremely rare for a goaltender to win the Vezina on a team that misses the playoffs and wins are still an important statistic when it comes to Vezina voters.

There's one hitch that oddsmakers might not be taking into account: the Canucks fully believe that Demko is their goaltender of the future. Instead of Holtby being the clear number one, it's more likely the two goaltenders will split starts, particularly with a condensed schedule due to the COVID-19 pandemic. It could be tough for Holtby to get enough starts to earn Vezina consideration.

Taking into account his past Vezina win, along with the change in coaching and scenery, is Holtby more likely to win the Vezina than Markstrom? If you don’t think so, maybe it’s time to place a bet on Markstrom.

9 options for the Canucks’ goaltending next season other than Jacob Markstrom
Oct 5, 2020 11:53 AM
Comments
We welcome your feedback and encourage you to share your thoughts. We ask that you be respectful of others and their points of view, refrain from personal attacks and stay on topic. To learn about our commenting policies and how we moderate, please read our Community Guidelines.