With the Canucks' cap crunch, Jake Virtanen might be their best option on the first line

Jake Virtanen may never get a better chance to prove himself as a top-six forward.

The Canucks’ cap crunch saw the team bid farewell to Tyler Toffoli after just 17 total games between the regular season and playoffs. That left a gaping hole on the right wing, with few options to fill it.

Consider this: the Canucks started last season with Micheal Ferland on the first line with Elias Pettersson and it wasn’t working out even before Ferland suffered a concussion that could end his career. With few other options before the trade for Toffoli, head coach Travis Green had Loui Eriksson in the top-six for most of the season: Eriksson was the most frequent linemate for Bo Horvat and Tanner Pearson.

Eriksson playing in the top-six for another season seems unthinkable — even his most ardent defenders see him as a penalty-killing specialist playing in the bottom-six — but the Canucks don’t have many other options and no cap space remaining. It would be surprising if the Canucks were able to shed more salary at this point and, even if they did, that extra cap space would likely go to shoring up the defence rather than the forwards.

There’s also the absence of Josh Leivo to consider. Leivo hasn’t played since fracturing his knee last season and is a free agent. The Canucks might not be able to find the cap space to re-sign him and he’s listening to offers from other teams. That takes another top-six option off the table for the Canucks.

When you look at the Canucks roster, it’s easy to see the opportunity for Virtanen. The Canucks don’t have a lot of players on the right wing with top-six upside. Maybe Kole Lind or Jayce Hawryluk could surprise in training camp or Nils Höglander could play on his off-side, but it’s far more likely that Virtanen, who scored 18 goals last season, will get first dibs.

Virtanen knows that this is a big opportunity and he’s eager to grasp it.

"I'd love to play top-six and have a bigger opportunity, more responsibilities," he said. "I want to be able to prove that to the team and my teammates that I can play up there and be consistent every night."

Jim Benning is betting on him taking that next step, choosing to qualify and sign Virtanen rather than attempting to hang on to Toffoli, a more proven albeit more expensive player.

“We think he’s going to be a consistent 20-goal scorer for us moving forward,” said Benning. “There’s been some growing pains along the way, as there is with lots of good young players.”

Canucks fans will have to hope that prediction pans out better than the last time Benning believed a player would be a consistent 20-goal scorer: Loui Eriksson. Of course, there’s a big difference between betting on a 24 year old to improve than a 30 year old to avoid a decline.

If Virtanen is the incumbent with the inside edge on a top-six spot, there is still the question of which top-six spot.

Can Jake ride shotgun with J.T. and Elias?

It would be easy enough to bump him up from the third line to the second line to play with Bo Horvat and Tanner Pearson, but there’s one big issue: Virtanen lacks defensive awareness and the Horvat line regularly matches up against the opponents’ best forwards. It’s hard to imagine a Travis Green-coached team using a player like Virtanen regularly in a matchup role.

That just leaves the top line with Elias Pettersson and J.T. Miller. Does it make sense to bump Virtanen all the way up to the first line?

When Virtanen had opportunities to play on the top line last season, the results were very good and it’s interesting to compare how he performed in that role to Toffoli and Brock Boeser. All three wingers had very similar results with Pettersson and Miller, but differ in how they got those results.

We’re looking at three statistics here: corsi, expected goals, and goals. Corsi (CF%) refers to shot attempts for and against; expected goals (xGF%) combines shot attempts and shot quality to measure the probability of a given shot resulting in a goal; and goals are, y’know, goals.

I want to hone in on xGF% here, because all three wingers have nearly identical percentages. Virtanen has the slight edge at 58.70% — the Canucks would be expected to out-score their opponents by 58.70% with that trio on the ice at 5-on-5 — but the difference between the three is so minute as to be meaningless.

The conclusion we could draw from this is that Pettersson and Miller were the clear drivers of that line’s success, if three very different forwards can have nearly identical results with them, but there are some key difference. One intriguing difference is how different Boeser’s results look when you split up offence and defence.

When Boeser was on the first line, they were far better defensively, at the expense of some offence. Boeser has significantly improved his two-way game and the top line was not only dangerous offensively, but also stifling defensively with Boeser. 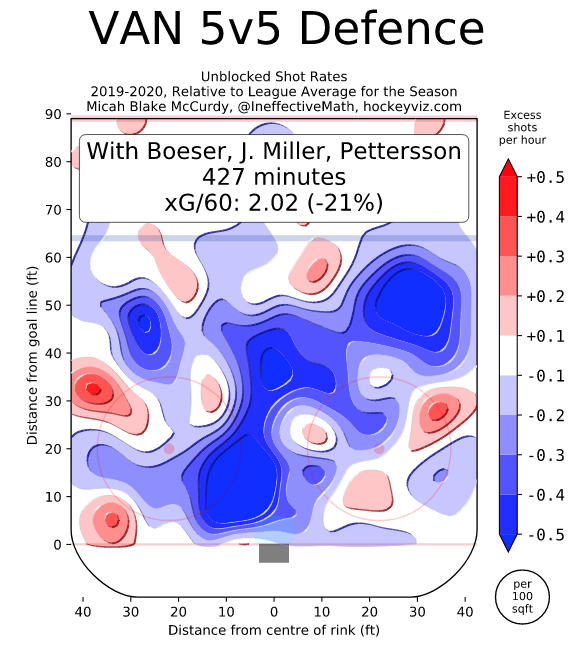 The Canucks' defence heat map with Pettersson, Miller, and Boeser via HockeyViz.com

That kind of defensive performance provides a certain comfort level for a coach, particularly with a line that’s going to play so many minutes.

On the other hand, there’s something to be said for a more offensively-potent first line in sheltered minutes. That’s especially true for a team like the Canucks that is so top-heavy up front. The Canucks can’t count on scoring from their bottom-six, so desperately need goal-scoring from their first line. In that case, you can sacrifice a little defensive responsibility, shelter the line from defensive zone starts, and hope for enough goals to make it all worthwhile.

We can also look at a little bit of context for each of those line combinations: on-ice shooting and save percentages, which combine into PDO, and offensive zone starts.

What stands out about Toffoli is that the first line managed to have the same xGF% with him despite a more even split between offensive and defensive zone starts. While Boeser and Virtanen started their shifts mostly in the offensive zone with the top line, Toffoli didn’t have that same benefit.

That makes sense for a play-driving winger like Toffoli. His defensive results weren’t as good as Boeser’s — Boeser is the superior in-zone defensive player — but he still pushed possession up ice effectively and it shows how it wasn’t just Pettersson and Miller driving those results.

Also, we can see Virtanen’s low on-ice shooting percentage and exceptionally high on-ice save percentage with the top line. While those are more a reflection of a small sample size, they show why the top line didn’t score as much as expected with Virtanen and also allowed so few goals. With more time, you would expect both percentages to regress towards average.

A question of consistency

Virtanen’s success with the first line last season, however, came in limited minutes: a shift here and a shift there. There were just nine games last season where the trio spent more than five minutes together at 5-on-5. Some of those games were fantastic, but there’s a reason why he didn’t play more on the top line.

For the optimistic, Virtanen’s lack of time on the top line might be considered a positive. If Virtanen was that good in spurts, perhaps he could be even better when given the chance to actually develop chemistry with Pettersson and Miller. The question is whether Virtanen can consistently play on that line and provide reliable results.

In other words, can Virtanen take the results from last season’s small sample size on the top line and repeat them over a much larger sample size next season?

That’s what Boeser provided to the top line, even if he wasn’t as offensively potent as fans or the coaching staff would have liked: consistency and reliability. That’s something he could bring to the Horvat line as well and his defensive game is strong enough to play in a matchup role, whereas the coaching staff would be less comfortable with Virtanen in that role.

If Virtanen can play a simple game — forecheck hard with his speed and size, get the puck to his linemates, and get to the front of the net — he could work on the top line. If he lapses into old habits — bad angle shots, perimeter play, and poor puck management — then he won’t last long in the top-six.

After winning a playoff round with a young core, the Flames and Oilers crashed and burned: how can the Canucks escape the same fate?
Sep 25, 2020 6:17 PM
Comments