"It was a landslide. Makar was the most lopsided award winner."

Quinn Hughes is having a phenomenal rookie season. At just 20 years old, he's already heading to his first All-Star Game as one of the best defencemen in the Pacific Division. He also leads all rookies in ice time and is first in power play points, as he's quickly stepped into a role as the quarterback on the Canucks' first power play unit.

At least, it's not enough for the Professional Hockey Writers Association (PHWA), which votes on the Calder Trophy award for the NHL's rookie of the year. In the mid-season awards, voted on by the PHWA over the last week, Hughes finished second to Cale Makar in the Calder Trophy vote, just ahead of Victor Olofsson.

Not satisfied just with knowing the final placement, I reached out to Frank Seravalli, President of the PHWA, to find out how close it was.

"It was a landslide," said Seravalli. "Makar was the most lopsided award winner. He generated 101 first place votes out of 117 ballots."

That's certainly understandable. Hughes is second in rookie scorring behind Cale Makar and Victor Olofsson, with 34 points in 48 games. In seven fewer games, Makar has 37 points.

Makar also has more than twice as many goals as Hughes, 11 to Hughes's 5. That has Makar in the top-10 among NHL defencemen in goalscoring. He's scored some pretty goals this season, using his great hands and quick release to undress defenders and make goaltenders look helpless.

Hughes, on the other hand, has other talents. While he has a better shot than many expected, his primary contribution is distribution. Hughes is sixth among NHL defencemen in assists and his ability to jump down the boards with his elite skating can throw opposing teams into disarray, opening up passing lanes to create scoring chances.

There's an argument to be made that Hughes is more essential to his team's success than Makar. After all, Hughes plays more and tougher minutes than Makar, regularly used in a match-up role against the opposing team's top forwards.

If you ascribe to analytics, there are some other arguments to be made in favour of Hughes. We can look at Regularized Adjusted Plus-Minus (RAPM) charts from Evolving-Hockey to compare Hughes to Makar directly and see that Hughes has had a more balanced impact on the Canucks, while Makar's impact is skewed heavily towards the offensive end of the ice. 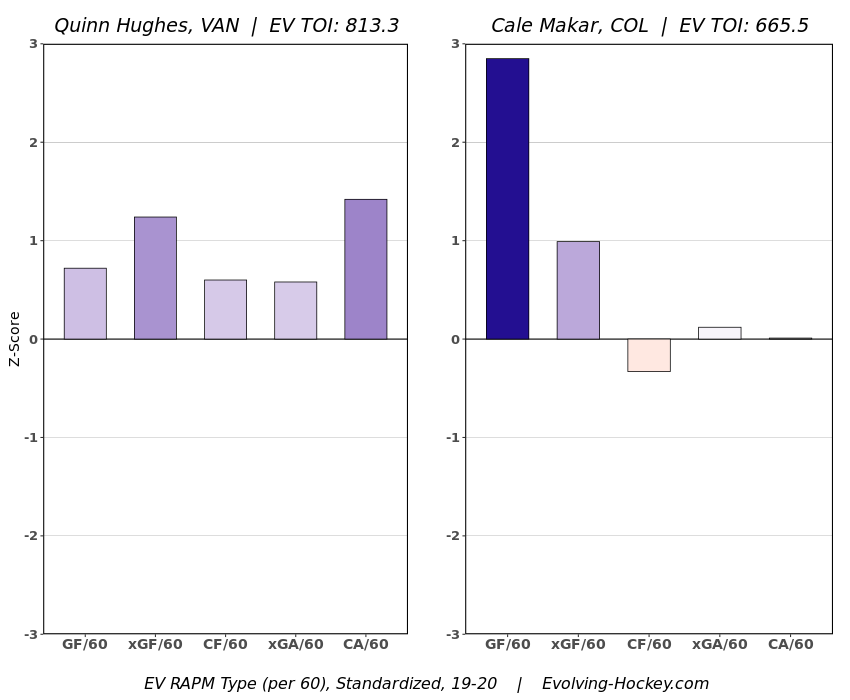 You could even look at this chart and point out that Makar's impact on goal production (GF/60) far out-paces his expected impact (xGF/60). That might suggest a certain amount of luck for Makar, who leads all NHL defencemen in shooting percentage at 12.8%. If his shooting percentage comes back down to earth, so will his goalscoring.

Of course, none of that matters if Makar keeps racking up points. He's currently on-pace for 66 points in 73 games this season, which would tie Phil Housley for the fourth-best season from a rookie defenceman of all time and would make him the first rookie defenceman in 34 years to get more than 60 points.

If Makar comes even close to that, he'll be nearly impossible to beat for the Calder Trophy. As much as other factors carry some weight, points still reign supreme when it comes to awards.

That means, if the Canucks want to have back-to-back Calder winners, Hughes will need to amp up his point production in the second half of the season. Key to that will be sorting out the power play issues that have caused a cold streak in recent weeks.

Of course, the Canucks would probably just rather make the playoffs rather than worrying about an individual award, and Hughes is already contributing plenty towards that goal.

Here are the complete results of the mid-season awards from the PHWA, which includes some non-traditional awards like the Rod Langway and Comeback Player of the Year:

In the interests of transparency, here is my ballot. As a new member of the PHWA this season, this was my first time voting for the mid-season awards: 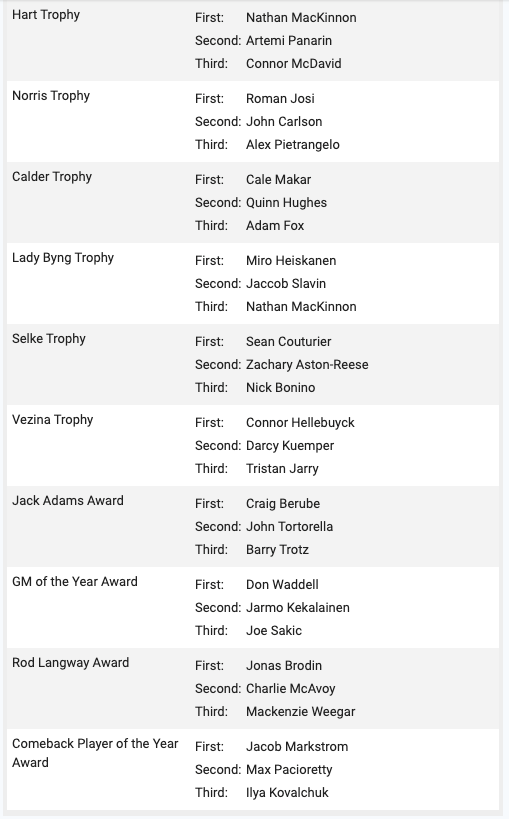 If Quinn Hughes goes to the All-Star Game, it won’t affect the Canucks’ salary cap situation
Jan 1, 2020 7:27 AM
Comments