Quinn Hughes: "We can play with the really elite teams in the NHL." 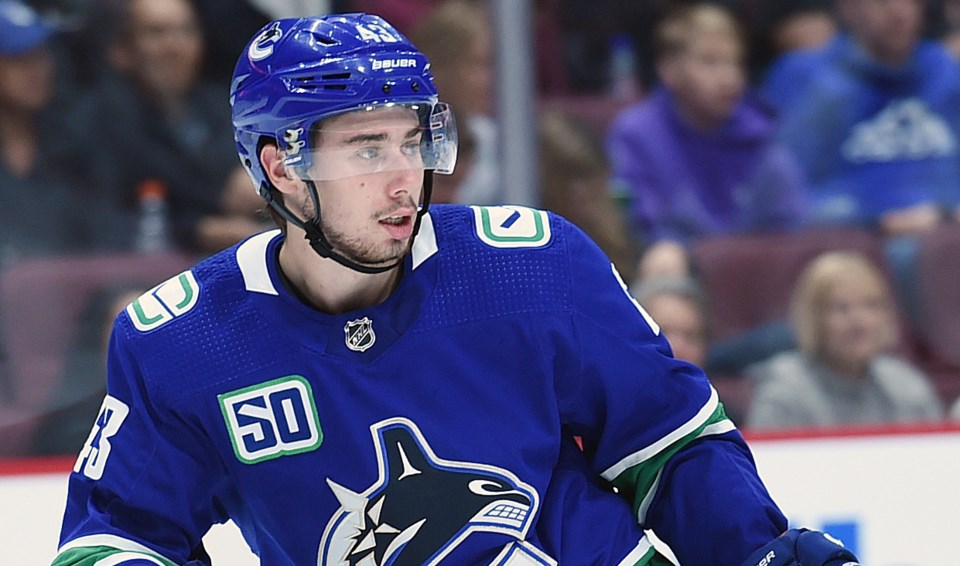 Whether Quinn Hughes can take a step forward in his sophomore season will play a major role in whether the Canucks can get better next year. photo: Dan Toulgoet

The Canucks have a lot of things going for them heading into next season. They've got youth on their side, their two best players are still on entry-level deals, and they have a cracking power play that should be the class of the NHL.

Most of all, they have plenty of self-belief.

In the playoffs this year, the Canucks were overflowing with confidence — in themselves individually and in their teammates — and that confidence hasn't ebbed even after falling short in the second round of the playoffs. Quinn Hughes joined Sportsnet 650 for an interview on Wednesday morning and expressed his belief that the Canucks are ready to compete with the best teams in the NHL.

Even as the youngest player on the team, Hughes was a big part of that "really good team," breaking rookie records along the way. He finished the postseason with 16 points in 17 games, the most ever for a rookie defenceman in the playoffs.

The emergence of Hughes as a true number one defenceman at just 20 years old has accelerated expectations for the Canucks, both from fans and within the team.

Hughes is justifiably confident in his own play, but a big part of his stellar rookie season is the confidence his coaches had in him right from day one. Head coach Travis Green and defence coach Nolan Baumgartner didn't hesitate to give Hughes tough matchups on the ice, trusting in the young defenceman's hockey IQ and physical skillset to handle big minutes.

"They're really good coaches, they're great communicators, and they're great motivators," he said. "I think they know how to get the best out of me and other guys. They're the type of guys that you want to win for. I wanted to win that Game 7, obviously for the city and for our teammates, but for the coaching staff too. I think as a coach, it's so important to communicate with your players and I think he does a really good job with that. I've seen a lot of coaches that don't."

"I've been fortunate to have these two, definitely, in my rookie year," he added. "I think we're all still building. It's only my first year with them. We've got a young group, so I think as the years go on, we'll just get to know each other better and better. That's the exciting part, it's only year one and we've got, hopefully, a long time."

How Hughes progresses will play a huge role in whether the Canucks can significantly improve for next season, as it will be tough for the Canucks to make additions to the roster with their current cap situation.

Fortunately, Hughes has given every indication that he can take a big step forward. In some ways, the playoffs were like a second season for Hughes, given the long break after the regular season was cut short. If the playoffs are any indication of how Hughes will play in his sophomore season, Canucks fans should be excited.

Now, it's almost as if Hughes gets a second offseason to work on his game and develop the areas where he needs the most work.

"Right now I'm taking a couple weeks off because I want to be hungry when I go back," said Hughes. "I'm just going to work on what I usually work on, my overall game: just getting faster, stronger, more skilled. We've got a good setup here in Michigan and I'm looking forward to that. For me, I think it's a really good opportunity to come into next year and try to get another 5-10% better."

If Hughes can take another step, if the Canucks continue to play with confidence, and if the management can find a way to make the salary cap work without losing a significant player, then Hughes could be right: the time is now for the Canucks to compete for the Stanley Cup.

The Canucks can’t afford to believe their own hype
Sep 9, 2020 3:26 PM
Comments
We welcome your feedback and encourage you to share your thoughts. We ask that you be respectful of others and their points of view, refrain from personal attacks and stay on topic. To learn about our commenting policies and how we moderate, please read our Community Guidelines.