Multiple NHL insiders report that Troy Stecher is on the market, but will the Canucks make a move in the midst of a playoff race?

The NHL trade deadline is just a few short days away, which means the rumours and reports are flying.

The Canucks, in the thick of a playoff race, are likewise in the thick of these rumours. For the first time in five years, they’re heading into the trade deadline clearly as buyers and Jim Benning made a clear declaration of intent with the rental of Tyler Toffoli.

It wouldn’t be surprising at all to see the Canucks make another move at or before the deadline. That could mean a minor deal to add some depth, or it could mean a much more significant addition — or subtraction.

According to Bob McKenzie on TSN’s Insider Trading, the Canucks are one of multiple teams that have inquired about Tyson Barrie of the Toronto Maple Leafs. The Leafs are currently two points out of a playoff spot and have played two more games than the two teams they trail.

“The Leafs basically told those teams that were interested, ‘Yeah, you know what, we would consider, under the right set of circumstances, trading Tyson Barrie,’” said McKenzie, which doesn’t sound like the most positive response.

“The first thing you need to know,” McKenzie continued, “it’s not a selloff for future considerations, it’s not like a lot of the rental deals. The Toronto Maple Leafs don’t want some magic beans that might pay off down the road.”

If the Canucks are interested in Barrie, they don’t have a wealth of magic beans left to offer after moving a first-round pick for J.T. Miller and a second-round pick for Toffoli. At this point, they might not want to mine their prospect depth too deeply either.

“Listen, one of two things has to happen in order for Barrie to be trade,” said McKenzie. “Either they have to get a defenceman coming back that makes them a better team right now, because they still want to make the playoffs, or they have to get picks and prospects that they could immediately turn around and parlay into that mythical unicorn right-shot defenceman that they’re looking to play with Morgan Rielly.”

The biggest question is whether they would want Barrie in the first place.

Before delving too deeply into those questions, however, it’s worth questioning just how much these rumours really mean. All that McKenzie is reporting is that teams, including the Canucks, have asked the Leafs about Barrie and Leafs GM Kyle Dubas hasn’t slammed the door shut in their faces.

So yes, teams might have asked about Barrie, but that doesn’t mean he’ll get traded. But after discussing Barrie, McKenzie looked at another right-shot defenceman that might be available on the trade market: Troy Stecher.

The pride of Richmond has found himself repeatedly starting from the bottom every season with the Canucks, working his way up from the bottom pairing year after year. There have been rumours that the Canucks are interested in trading Stecher for quite some time.

“There has been a lot of trade talk emanating out of Vancouver about defenceman Troy Stecher,” reported McKenzie. “Whether or not Stecher could be or would be part of anything with Toronto remains to be seen.”

TSN’s Grady Sas, citing separate sources from McKenzie, is also reporting that the Leafs have asked about the availability of Stecher.

Sounds like Toronto is kicking tires on #Canucks D-man Troy Stecher, and he’s a type of player Kyle Dubas would be interested in.

Elliotte Friedman confirmed that Stecher’s name is out there on the trade market in a hit on Sportsnet 650, pointing to the Ben Hutton situation where the Canucks were unwilling to meet Hutton’s qualifying offer and saw the defenceman go to free agency, losing him for nothing. It would be understandable if the Canucks wanted to avoid a similar situation with Stecher.

.@FriedgeHNIC: The Stecher rumours are definitely true. #Canucks went through a situation with Ben Hutton where they were uncomfortable with what it would take to qualify him and they lost him. I do think that is a factor and that Stecher is available.

Benning has talked about recouping picks in the wake of trading them away for Miller and Toffoli. Given the cost of acquiring defencemen in the trade market right now, trading Stecher would certainly accomplish that goal.

Where would that leave the Canucks? There’s an argument to be made that Stecher is the Canucks’ best right-side defenceman, though that might not be the most possible argument after a couple rough recent games featuring two bad-luck own goals.

Unless they acquired a replacement, trading Stecher would mean calling up Brogan Rafferty from the Utica Comets, who is having a phenomenal rookie season in the AHL. Is he ready to play regular NHL minutes in a tight playoff race?

That loops us back to the reported interest in Barrie on the part of the Canucks. Could a trade of Stecher for Barrie work, with other pieces added? Maybe. Their contracts are not dissimilar, so it could work from a cap perspective, though Barrie is an unrestricted free agent at the end of the season, while Stecher will be restricted.

The question is whether the Leafs would even want to do that. They might be interested in adding Stecher, but not at the cost of Barrie. Instead, Stecher would potentially be an upgrade on Justin Holl or Travis Dermott.

So, it’s more likely that we’re talking about two entirely separate deals. The Leafs are unlikely to move Barrie, but Stecher might actually get dealt, at which point the Canucks would need to look for another right-shot defenceman or gamble on Rafferty.

Even if the Canucks could pry Barrie out of Toronto, would he actually be an upgrade for the Canucks? He’s certainly more offensively potent than Stecher, Chris Tanev, or Tyler Myers, but it comes with a heavy helping of defensive questions. 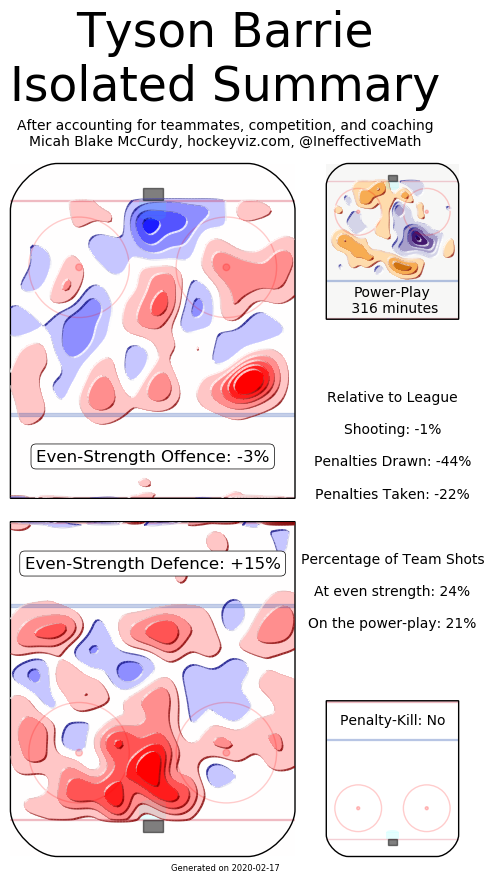 Overall, the acquisition cost of Barrie will likely be too high and the difference he would make on the ice too small to justify making that particular move. It's a good thing it's unlikely to happen, then.

As to the other half of the rumours, it would be tough to see a local boy like Stecher get traded from the team he grew up watching. It's also unclear why the Canucks seem so intent on moving on from Stecher, instead of just re-signing him in the offseason. If they don't see him as part of the future, however, and won't re-sign him, it's better from an asset management standpoint to trade him. It's just not better from an emotional standpoint.

Fortunately, most rumours never come to fruition. We'll see in a few days time when the trade deadline rolls around.