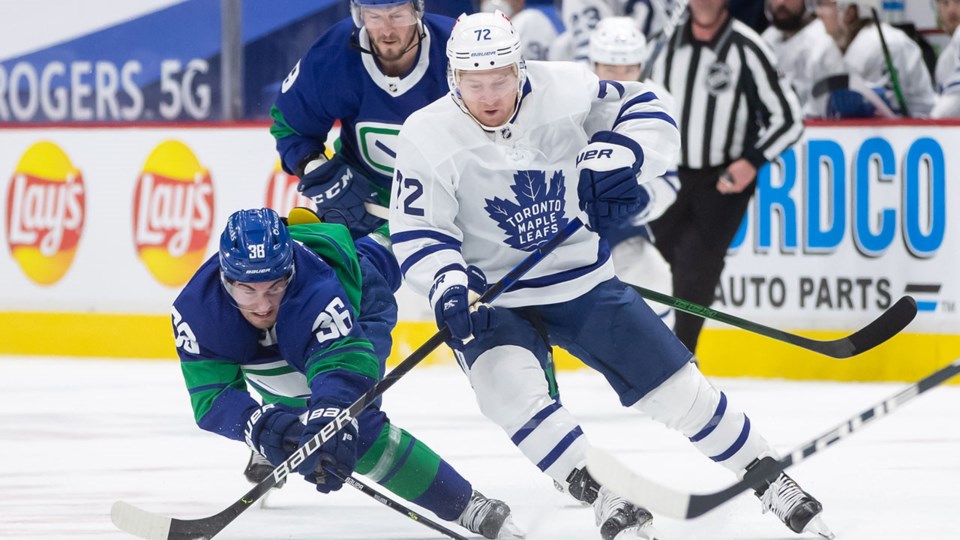 Travis Boyd is no longer on the Toronto Maple Leafs after a waiver claim by the Vancouver Canucks. Darryl Dyck / CP

It turns out the Vancouver Canucks actually can get bottom-six forwards on cheap contracts. They just need to let the Toronto Maple Leafs sign them first and then claim them off waivers.

Just as they did with Jimmy Vesey last week, the Canucks snagged some forward depth of the waiver wire on Monday by claiming Travis Boyd from the Leafs. At one point this season, Vesey and Boyd were together on the Leafs’ fourth line; now they’re both potentially going to play a larger role on the Canucks.

Boyd is a capable fourth-line centre who can also play on the wing. He’s not a faceoff specialist in the slightest — he has a career 38.5% faceoff percentage — but he does have a little bit of experience on the penalty kill from his days with the Washington Capitals. That also means he’d have some familiarity with fellow former Capitals Braden Holtby and Jay Beagle, as well as Nate Schmidt —  he never played on the Capitals with Schmidt, but they played together at the University of Minnesota.

"You don't want to lose these guys."

"It's very similar to Vesey, you don't want to lose these guys," said Leafs head coach Sheldon Keefe. "But the system is what it is, the salary cap is what it is, so you've got to manage that well."

Waiving Vesey and Boyd was intended to give the Leafs some salary-cap flexibility, as they could move between the main roster and the taxi squad to create some additional space leading up to the trade deadline. To move them to the taxi squad, however, they had to go on waivers where they could be claimed by another team.

Like Vesey, Boyd is on a cheap contract. His one-year deal at a league-minimum $700,000 expires at the end of the year. It's the type of deal the Canucks should be looking to sign future fourth-line centres when their young stars, like Elias Pettersson and Quinn Hughes, are no longer on their entry-level contracts.

The 27-year-old Boyd has a dash of offensive ability, with 8 points in 20 games for the Leafs while playing under 10 minutes per game. That immediately makes him the highest-scoring member of the Canucks bottom-six, tied with Brandon Sutter, except Sutter has played 15 more games.

"He's played well here with the opportunities he was given," said Keefe. "We would have liked to keep him and certainly the depth is nice to have, but we feel like  we have lots of other guys."

"I can be an everyday player."

Boyd has never quite become a full-time NHL player, either with the Capitals or with the Leafs.

“For me, I’ve thought that I should have been or could be an everyday NHL player for a few years now and that opportunity just kind of didn’t pan out in Washington,” said Boyd in February. “Coming here my mindset was to come in and earn that spot...just to kind of believe in myself a little bit more and go out there and know that I can be an everyday player.”

He could have that chance in Vancouver. Boyd’s arrival could give the Canucks flexibility to feel more comfortable about making a Brandon Sutter trade, if there is one available to make. Boyd can play a solid defensive game.

“He's a smart player, can play centre or wing,” said Canucks head coach Travis Green. “Obviously, he was in an organization in Washington where he had a lot of good players ahead of him. Looking forward to seeing him here.”

According to Green, Boyd is a player the Canucks scouts have had their eyes on for a while.

“I know this is a guy that they've talked about in the past,” said Green. “I've watched a little bit of video on him and from what I've seen, I like him, our scouts have liked him and obviously Jim [Benning] did too.”

It’s unclear exactly when Boyd would be available to play for the Canucks. Green mentioned the need to quarantine and the NHL protocol stipulates a 7-day quarantine for players who move from one team to another. The Canucks were able to circumvent the protocol with Vesey, as he drove directly from Toronto to join the team in Ottawa, but they won’t be able to do that with Boyd.

That likely means Boyd likely won’t be able to play until the end of the month, March 31st, when the Canucks face the Calgary Flames. Given the Canucks’ schedule this week — they have six days off after playing the Winnipeg Jets on Wednesday, Boyd won’t actually miss many games.

At that point, Boyd could step into the lineup directly. He’s arguably an upgrade on the likes of Antoine Roussel and Zack MacEwen. Jay Beagle, who has been day-to-day with an undisclosed injury, skated with the team on Monday in a non-contact jersey, so is close to making his return, but Boyd could potentially play at centre in place of Beagle if he is still recuperating in a week’s time.

On a Canucks team with limited winger depth, Jimmy Vesey could have an outsized opportunity
Mar 18, 2021 4:46 PM