The Canucks should be sellers heading into the 2021 NHL trade deadline but will they make the moves they need to?
Mar 26, 2021 2:45 PM By: Daniel Wagner 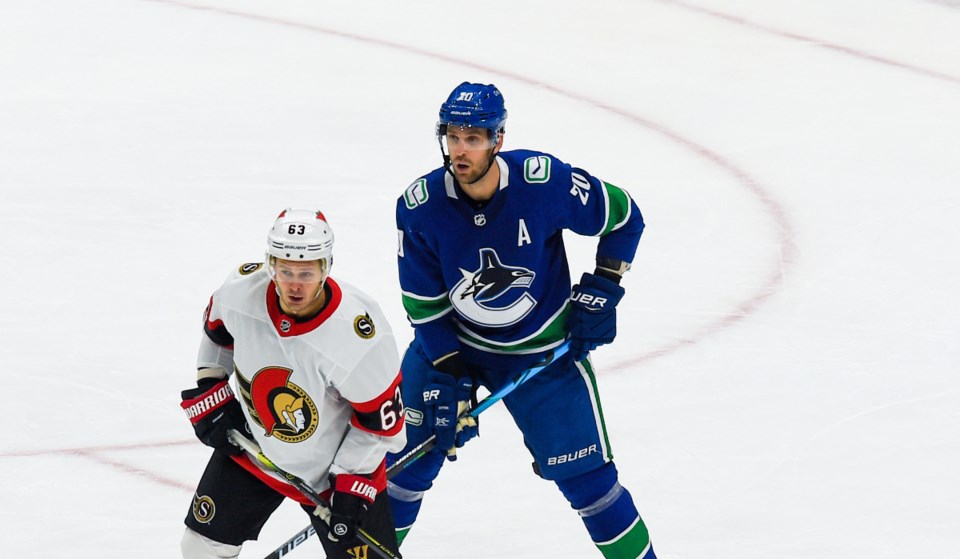 The Vancouver Canucks should be looking to move pending UFAs like Brandon Sutter heading into the 2021 NHL trade deadline.Bob Kronbauer / Vancouver is Awesome

At some point, Jim Benning is going to have to stop living day-by-day and accept the reality that the Vancouver Canucks are not going to make the playoffs this season.

Even though the Canucks are currently in fifth place and just two points out of a playoff spot, the math just isn’t in their favour. The Montreal Canadiens ahead of them have six games in hand on the Canucks and are on-pace for 67 points. For the Canucks to reach 67 points, they would need to pick up 32 points in just 19 games — a 15-2-2 record, for example.

That means the Canucks need to turn their eyes towards the trade deadline, which is just a couple of weeks away.

The Canucks have a few players that could be on the move at the trade deadline, including pending UFAs Tanner Pearson, Brandon Sutter, and Jordie Benn. Canucks fans and media alike have pondered the potential return the Canucks might get for these types of trade assets, but the Benning's track record from past deadlines suggests that they shouldn't get their hopes up.

Let’s take a look at the last six years of trade deadlines to see what types of moves Benning has favoured.

The Canucks were clear buyers in 2015 as they headed back to the playoffs in Benning’s first year as GM. Beyond an AHL swap of Dustin Jeffrey for Cory Conacher, the only significant trade Benning made at the deadline was to acquire Sven Baertschi from the Flames for a second-round pick.

Still a prospect at the time, Baertschi didn’t help much in the 2015 playoffs, but became a solid second-line winger for the Canucks over the next few seasons before being unceremoniously dumped in the AHL last season.

The second-round pick became Rasmus Andersson, who is on the Flames’ top pairing right now, so what seemed like a clear win for Benning and the Canucks has tipped the other way in the years since.

An under-the-radar bad move a couple of months prior to the deadline also hurts. The Canucks traded prospect defenceman Gustav Forsling to the Chicago Blackhawks for Adam Clendening, who played just 17 games for the Canucks. Forsling went on to some success with the Blackhawks and is currently playing quite well on the second pairing for a surprisingly good Florida Panthers team.

For a team that has struggled to build a good young defence corps, 2015 stings a little.

The Canucks should have been sellers at the 2016 trade deadline but ended up trading away a pick and a prospect instead of acquiring them.

The two trades the Canucks made weren’t terrible overall. They took a chance on Larsen that didn’t pan out, but Granlund was an adequate middle-six forward for a few seasons before washing out of the NHL, while Shinkaruk failed to even make the NHL.

The issue was the trades the Canucks didn’t make, allowing pending UFAs Dan Hamhuis and Radim Vrbata walk in free agency without acquiring any picks or prospects for either of them.

Even with their no-trade clauses, there were deals to be made for both Hamhuis and Vrbata. Benning just couldn’t or wouldn’t complete those deals.

That it came at a time when the Canucks were refusing to even utter the word “rebuild” made the 2016 trade deadline all the more frustrating.

The fourth-round pick acquired from the Sharks in the Hansen trade remains the only draft pick Benning has acquired at or near the trade deadline.

Still, this deadline finally signalled that the Canucks knew they were in a rebuild, trading away two fan-favourite veterans for prospects. Unfortunately, neither Goldobin nor Dahlen worked out in Vancouver, so even though the process was good, the end result didn’t help the Canucks.

That’s always a risk when trading for prospects. Sometimes you have to wonder why a team, who would know them better than anyone, is willing to give up on a prospect in a trade. Sometimes it’s better to acquire a draft pick for that reason.

The Vanek trade was panned at the time, but Motte has turned into a solid bottom-six forward, who is particularly good on the penalty kill.

The Holm/Leipsic trade was inconsequential. Holm never played in the NHL again, but Leipsic was mediocre with the Canucks and ended up being claimed on waivers by the Los Angeles Kings the following year.

Like in 2016, the issue for Benning was the deal he didn’t make. Instead of trading Erik Gudbranson while he might still have some value around the league, he doubled-down on one of his worst moves as Canucks GM, re-signing Gudbranson to a three-year, $12 million contract.

It’s not hindsight either: many were suggesting the Canucks shouldn’t re-sign Gudbranson and that the obvious move was to trade him instead.

Just one year after re-signing Gudbranson, Benning thought better of it and traded him for Pearson, who was struggling with the Penguins.

The trade clearly worked out well for the Canucks. Pearson quickly settled in on the second line with Bo Horvat, while Gudbranson fizzled in Pittsburgh and was eventually flipped to the Anaheim Ducks for a minimal return.

Benning also moved Dahlen, whose relationship with the Canucks quickly deteriorated, to the Sharks for Karlsson, who is a longshot to make the NHL but is ripping up the Allsvenskan league in Sweden this year.

The troubling trade here is the Gagner deal. After just one year of a three-year deal, Benning sent the well-liked Gagner to the AHL. He then traded him to the Oilers for Spooner, who he subsequently bought out and is still taking a $1.033 million chunk out of the Canucks’ salary cap this season. It was a bizarre sequence of events that doesn’t get discussed enough.

For the first time in five years, the Canucks were in a position to be buyers at the trade deadline, even if just barely. Benning had already signalled with the J.T. Miller trade in the offseason that they were all-in on making the playoffs and trading for Toffoli further cemented that fact.

Was it a good idea to spend big on a pending UFA that was likely going to end up as a rental when the Canucks were on the playoff bubble? Probably not, particularly when Benning “ran out of time” to re-sign the goal-scoring winger in the offseason.

While he was in Vancouver, however, Toffoli was fantastic, immediately finding chemistry with Elias Pettersson and J.T. Miller and filling in for the injured Brock Boeser to keep the Canucks in the playoff race. Regrettably, the pandemic-shortened season and an injury limited Toffoli to just 17 games with the Canucks between the regular season and playoffs.

From players and picks acquired from the past six deadlines, the Canucks only have Baertschi, Motte, Pearson, and Karlsson still in the organization. Baertschi has evidently become persona non grata, Pearson is a pending UFA, and Karlsson is a longshot to make the NHL. Hey, at least they have Motte.

The Canucks are sellers again and there are parallels to be drawn to past deadlines. While they don’t have anyone of the calibre of Hamhuis or Vrbata, they still have UFAs that should similarly be dealt before the deadline.

Both Sutter and Benn have modified no-trade clauses that will limit Benning’s options, though not to the same degree as Hamhuis or Vrbata. Neither clause should prevent a trade, however.

The question is what the return might be. The Canucks should likely avoid acquiring prospects — any prospect brought back for Sutter or Benn would likely come with some significant red flags — and aim for draft picks instead. Even late-round picks can lead to quality players for the future.

Benning’s track record, however, shows that he typically aims for reclamation projects — players, like Granlund, Baertschi, and Goldobin, that haven’t reached their potential on their current team. While these players have played for the Canucks, and sometimes quite well, they haven’t been able to become a part of the team’s core for the future.

The Pearson situation, meanwhile, bears a resemblance to the Gudbranson situation, which is somewhat ironic. Like with Gudbranson, Benning is evidently looking to re-sign Pearson when he should instead be looking to trade the winger. Pearson’s play is likely to decline in the coming years and a new contract could see him becoming like Baertschi or Gagner, where the team regretted a new contract a year or two in and stashed both players in the AHL.

Has Benning learned his lesson from past trade deadlines? Will the Canucks get assets that can help them in the future? We’ll see what happens over the next two weeks.