In a sport full of macho posturing, the Sedins embodied quiet dignity and courage, setting the tone for the Canucks' future.
0
Feb 12, 2020 12:22 PM By: Will Graham 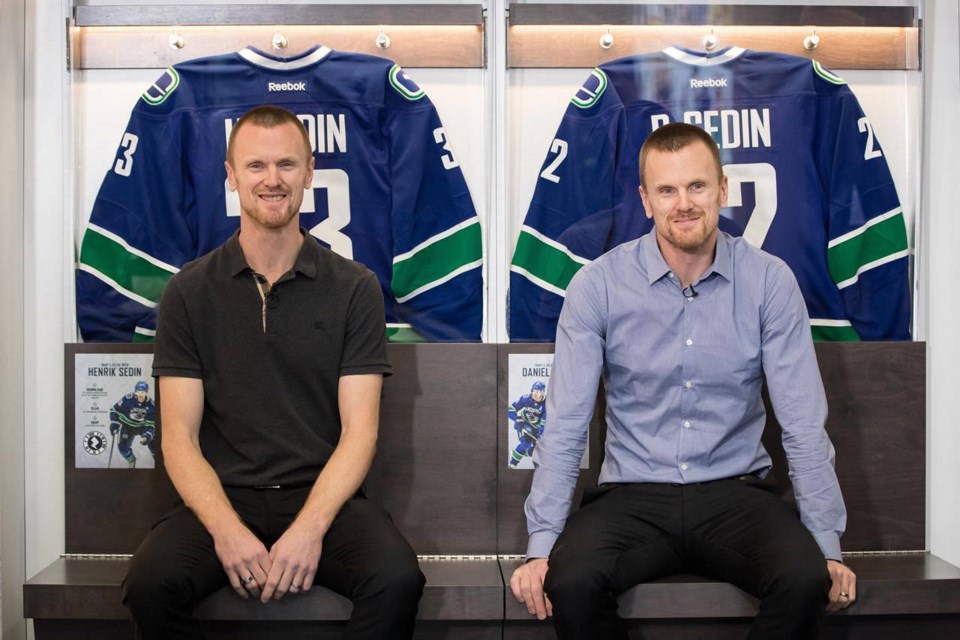 When I got into hockey, I watched for Todd Bertuzzi. I loved that opposing teams didn’t really have an answer for him. He was big, tough, and mean. He protected his teammates, and he scored lots of goals. No one messed with Big Bad Bert.

The team also had this pair of skinny Swedes. Daniel and Henrik Sedin were skilled, but they didn’t play a hard-nosed game. Fans and media weren’t convinced they would be impact NHLers, and neither was I.

As you can imagine, March 8, 2004 was eye-opening for me. For better or worse, the Canucks had constructed their team on a particular cultural foundation, and I witnessed its endgame.

Soon after that, Bertuzzi was traded — the West Coast Express, dismantled. Somehow, our hopes and dreams landed in the hands of those skinny twins. And, to my utter surprise, they flourished.

They were still soft-spoken and skilled and largely non-physical, but they were also fierce competitors. They wore down opposing teams and their critics. They honed and perfected a dominant, cerebral, vaguely telepathic style. The entire league chased their cycle.

I loved watching them play, but moreso, I grew to love these two dignified humans. Daniel and Henrik Sedin modeled a type of leadership I hadn’t seen before in this violent sport. In the glare of the spotlight they revealed themselves to be men of quiet character, respected not just for their abilities but for how they approached the game, the city, the fans, and their own celebrity.

It wasn’t always easy, however. The Sedin twins took a ton of abuse.

That’s even more impressive when you remember that they were constantly targeted by opponents.

Like, a lot. Very often. Way too many times. All. The Freaking. Time.

They were also bombarded with ugly, misogynistic insults, garden-variety xenophobia, and other verbal garbage designed to “throw them off their game.”

Rather than call this out, or insist that the GM bring in a true enforcer, or train with Kevin Bieksa and learn to smash some faces, the twins just endured the abuse, all of it.

This wasn’t some “tire out my enemy with my face” Rocky-style strategy, or a “beat them on the scoreboard” routine, but a simple, stubborn refusal to be drawn into a game they had zero interest in playing.

This decision not to retaliate came with flak of its own. Conventional hockey wisdom favours consequence and deterrence. Commentators rarely reward players for staying cool or for disengaging from conflict.

Some even had the gall to suggest the Sedins lacked courage for enduring all this abuse. Imagine that. These were players so unstoppable that opponents could only respond with slurs and hacks and dirty hits. And somehow that’s supposed to reflect poorly on the Sedins? Ridiculous.

They had to contend with disappointment too. No one is immune to it, not even a magical set of Swedish twins. Unlike Elias Pettersson, the Sedins didn’t exactly roar out of the gate. It took several seasons for them to hit their stride and ages longer to gain people’s respect, even in Vancouver.

In the playoffs, the Canucks were twice defeated by archrival Chicago. Eventually they overcame the Blackhawks (in epic fashion, I might add), only to suffer a crushing game seven loss in the Stanley Cup Final. After that the team suffered two first round exits before sliding into an extended rebuild.

No one would have blamed Daniel or Henrik if their disappointment had gotten the better of them, especially when it seemed like hockey culture had turned on them en masse. Honestly, in their shoes I might go full Kylo Ren.

Their response? They took personal responsibility, and got back to work. They did this season after season: handling setbacks with class and grace, never throwing a soul under the bus, never a whisper of petulance, never a murmur of discontent.

Oh, and then they’d go put in long hours to ensure their bodies were ready each season.

I was originally surprised to hear that the Sedins were routinely the best conditioned players on the Canucks, because they weren’t exactly musclebound. We’ve all seen the photos of hockey players who chisel their bodies into ESPN-sanctioned perfection. Daniel and Henrik were never those guys.

Instead, they constantly worked on their core, lower body strength, skating stride, and cardiovascular fitness, and by doing so made their game look effortless.

Critically, they never showed up to training camp out of shape. The team relied on their cycle, and they couldn’t afford to be a step behind, or injured. It’s not surprising that the twins rarely missed a game.

Every NHL locker room will boast a different leadership style. Some rally the troops with loud speeches, some lead by example, others encourage players one-on-one.

I’d argue that the Sedins led dad-style. They slipped into that Vancouver leadership role like a fresh pair of white New Balance sneakers. They kept that locker room as neat and tidy as a fine garden shed.

Honestly, the Sedins actually remind me quite a bit of my own dad. A bit dorky, pretty quiet, but if you ask them to do something for you, they’ll be there. In fact they’ll arrive 15 minutes early and stay until the end, and they’ll probably take you out for pie and coffee afterwards so you can talk about RRSPs.

And they wouldn’t just lead, they’d elevate. The Sedins had a reputation for elevating the game of any winger to play with them, from Trent Klatt to Anson Carter to Taylor Pyatt. Even Markus Naslund benefitted from time on the Sedin line.

Then there was Alex Burrows, their perfect linemate and close friend. Alongside the Sedins, Burrows participated in some of the biggest moments in Canucks history. It should come as no surprise that the three hardest workers on the team lined up together.

It’s important to remember: none of this happens without Daniel and Henrik. If they’d been driven out of town by the early criticisms, or beaten down physically by their opponents, or if they’d signed with Toronto in 2009, we’d have a different team altogether. Probably one with a worse culture.

And my goodness, am I glad they didn’t leave. I’ve never seen players do what they could do. There was the shift, and the other shift, and the goal, and the goal that makes me cry. I mean they put Brad freaking Lukowich on the highlight reel.

I can’t imagine a Vancouver without their charitable donations or their impressive dedication to the community. They even tried to keep their $1.5 million gift to BC Children's Hospital a secret, because of course they did.

Knowing when to walk away

The Sedins left on their own terms. That’s not always easy for a leader. You’re giving up the opportunity to command a room, win more games, maybe a championship. But stepping aside at the right time shows enormous character.

They accomplished plenty: a Hart trophy for Henrik, a Ted Lindsay for Daniel, an Art Ross for each. Two Presidents’ trophies, a trip to the Stanley Cup Final, and sole possession of first and second place in franchise scoring. Then there were the international accolades, including Olympic Gold in 2006.

They knew what they meant to Vancouver, and to Canucks fans across the country. And they knew it was time to step aside and make room for the next generation.

The jersey retirement ceremony is bittersweet. It’s sad to say this final goodbye, isn’t it? They’ll still be around, obviously, but it still feels like a loss.

Here’s what I know: kids often carry on what their parents built. And when I look at the character of Vancouver’s new leaders—the quiet hard work of Bo Horvat, the transcendent skill of Elias Pettersson, and the kindness and compassion of Brock Boeser—I can’t help but see echoes of Sedinery.

The kids are here, and they’re good. They’re not just good at hockey, they’re good at being people, and the Sedins, with their endless class and untarnishable character, set that stage. These are the days, enjoy them.

10 lesser-known, unusual, and just plain weird Sedin linemates
Feb 11, 2020 5:28 PM
Comments
We welcome your feedback and encourage you to share your thoughts on this story. We ask that you be respectful of others and their points of view, refrain from personal attacks and stay on topic. To learn about our commenting policies and how we moderate, please read our Community Guidelines.