Which bottom-six forwards aced their audition with the Canucks?

The Vancouver Canucks could really use some cheap forward depth next season.

Elias Pettersson and Quinn Hughes are about to receive some significant raises from their expiring entry-level contracts. The team desperately needs to zhuzh up their defence and they could also use another top-six winger — maybe two top-six wingers if they plan on playing J.T. Miller at centre.

All of that will come at a cost, so the team needs to fill out the rest of the lineup on a budget. They could use a few players on near league-minimum contracts to play in the bottom-six, sit in the press box as the 13th forward ready to step in, or be ready for a call-up from their AHL team in Abbotsford at a moment’s notice.

The Canucks had a whole bunch of bottom-six forwards audition for a spot this past year. Which, if any of them, made a big enough impression to be considered for a post next season?

Let’s start with three players who will definitely be in the mix next season. Kole Lind, William Lockwood, and Jonah Gadjovich each made their NHL debut with the Canucks towards the end of the season, with Lind getting the longest look.

Lind was even used a bit in a top-six role, playing alongside Bo Horvat and Tanner Pearson, before sliding back with linemates like Travis Boyd, Matthew Highmore, and Jimmy Vesey. Lind was solid in his debut and showed that he can keep up with the pace of the NHL — at least, the pace of the NHL at the end of the season when there’s no push for the playoffs.

At the very least, Lind showed enough grit in his seven-game audition to potentially be a fit on a third or fourth line next season. He might be able to grow into adding a little offence as well, the way he did in the AHL. The question is whether he’ll even be on the Canucks next season. There’s a possibility he’ll get left exposed in the expansion draft and claimed by the Seattle Kraken.

Will Lockwood had some defensive struggles in his two games with the Canucks and did not look as NHL-ready as Lind. That said, he has excellent speed and had a couple of good shifts with Vesey and Boyd. It’s tough to judge a player in such a short audition, but I’d like to see him start the season in the AHL, taking on a major role in Abbotsford, before he gets another NHL shot.

Speaking of short auditions, poor Jonah Gadjovich played less than five minutes in his one game with the Canucks. His night ended early when he got an instigator penalty during a fight. By the time his 17 minutes in penalties were up, the Canucks were in the midst of a third-period comeback, so Gadjovich didn’t see another shift.

In that time, he unfortunately coughed up a puck inside his own blue line with an ill-considered pass for a Calgary Flames goal. You can’t judge a guy for one bad moment but he’s likely to start the season in Abbotsford. That is, unless the Kraken take him in the expansion draft.

The Canucks have a pair of bottom-six forwards already signed to cheap contracts. Matthew Highmore will be a hair below league minimum on the final year of his current contract while Zack MacEwen has one more year at $825,000.

MacEwen was good defensively this past season, with the lowest expected goals against per 60 minutes on the Canucks. The trouble is that he was used in a very sheltered role on the fourth line and didn’t provide any offence, managing just 2 points in 34 games. 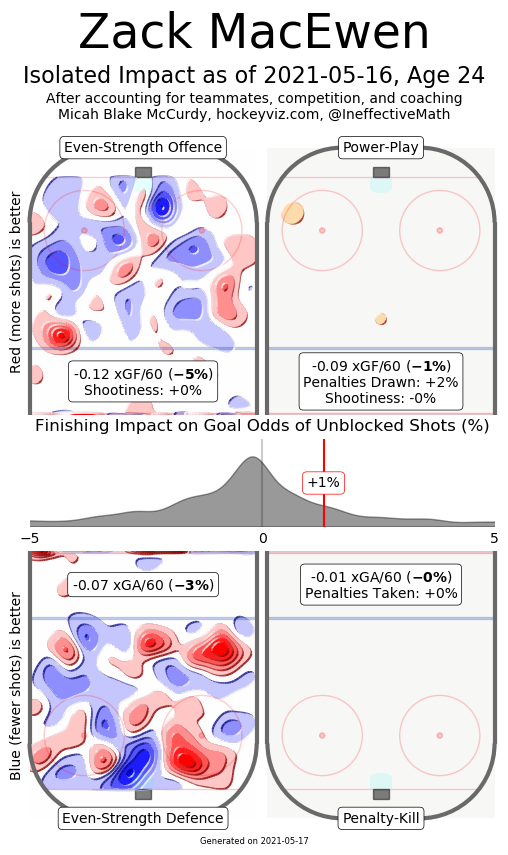 The Canucks have talked about wanting more scoring from the bottom-six, so MacEwen needs to either step up that side of his game or prove that he can be a defensive specialist capable of playing against tougher opponents. That will likely require him to earn a spot on the penalty kill. Otherwise, the best he can hope for is to be the team’s 13th forward.

Highmore is likely to have an inside track on a roster spot next season because the Canucks traded Adam Gaudette to get him. That means two things: they like him as a player and they likely don’t want to face a scenario where Gaudette is playing for the Chicago Blackhawks and Highmore isn’t even in the lineup.

That said, Highmore really didn’t show much in his time with the Canucks. While he managed 5 points in 18 games, he was crushed in puck possession. Among Canucks forwards who played at least 10 games, Highmore’s 41.49% corsi was third-worst, ahead of only Tyler Graovac and Marc Michaelis — more on them in a moment. 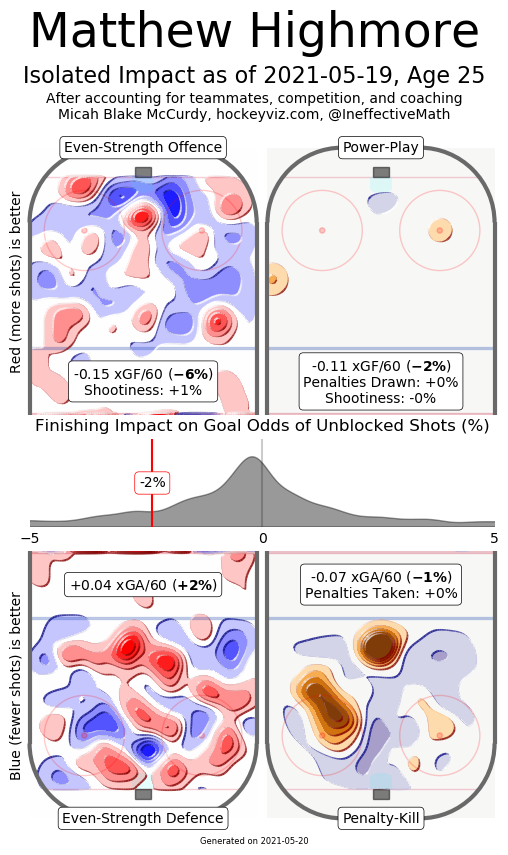 Highmore is a decent penalty killer, so that helps his case, but he’ll need to take a significant step forward next season at 5-on-5. He will be turning 26 next season, so it’s hard to expect a leap in development.

The Canucks have to hope that in the right situation, Highmore can thrive and score a few goals with his speed and decent shot.

Both Jayce Hawryluk and Marc Michaelis are restricted free agents in need of new contracts from the Canucks. Should either of them get one?

Hawryluk had a similar season to Zach MacEwen — decent defensively in a sheltered role, but with limited scoring. He managed 5 points in 30 games, which was disappointing after he showed some offensive potential with the Ottawa Senators last season. 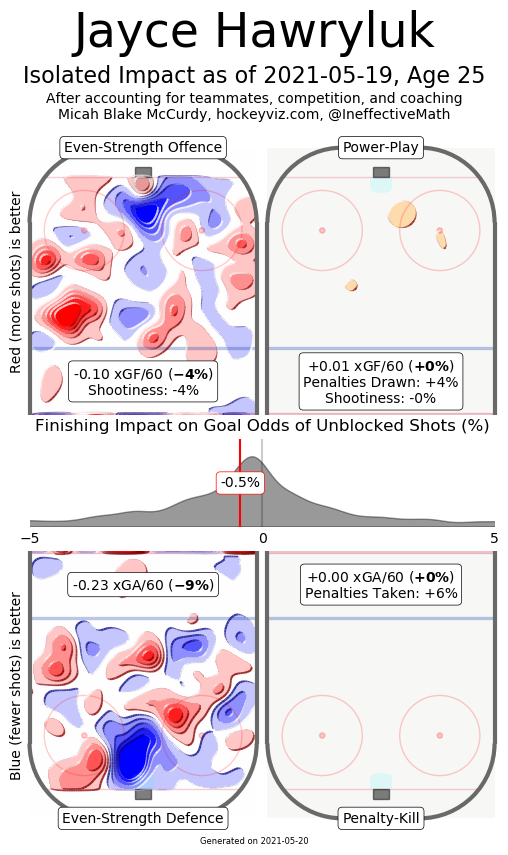 The big issue for Hawryluk is that he wasn’t able to crack the lineup on either side of special teams. Unless he can find a role on the penalty kill, it will be tough for Hawryluk to be an NHL regular, as he simply does not offer enough offence. Still, he’s worth re-signing as a depth player. He can battle for a job in training camp and get sent down to Abbotsford if he doesn’t impress.

Michaelis, on the other hand, looked overmatched every time he stepped on the ice for the Canucks. His 35.98% corsi was the worst on the team aside from Gadjovich in his five minutes of action. He simply gave up way too much defensively and repeatedly got stuck in his own end of the ice. 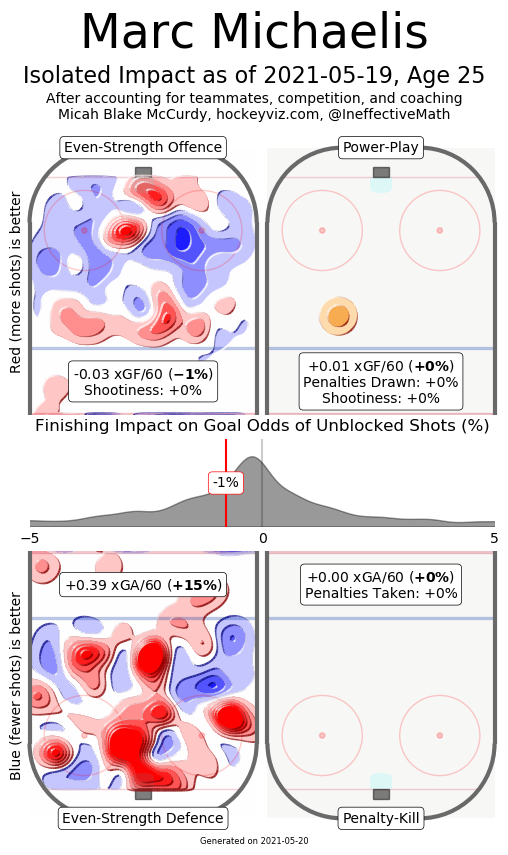 If the Canucks re-sign Michaelis, it should only be to play in Abbotsford.

A few of the players who auditioned for bottom-six roles are on their way to unrestricted free agency, including waiver claims Jimmy Vesey and Travis Boyd, and sizable depth forwards Tyler Graovac and Justin Bailey.

Despite being given top-six opportunities in Vancouver, Vesey couldn’t manage even a single goal in 20 games for the Canucks. He can play both sides of special teams, but the word that comes to mind when watching Vesey play is “bland.” He’s unlikely to get a contract offer from the Canucks.

Boyd, on the other hand, might be worth signing, if only because he’s a centre and the Canucks’ centre depth is woeful. He’s put up some points in the past, so if the Canucks want to consider him as a fourth-line centre in place of Jay Beagle, it might be worth a shot. 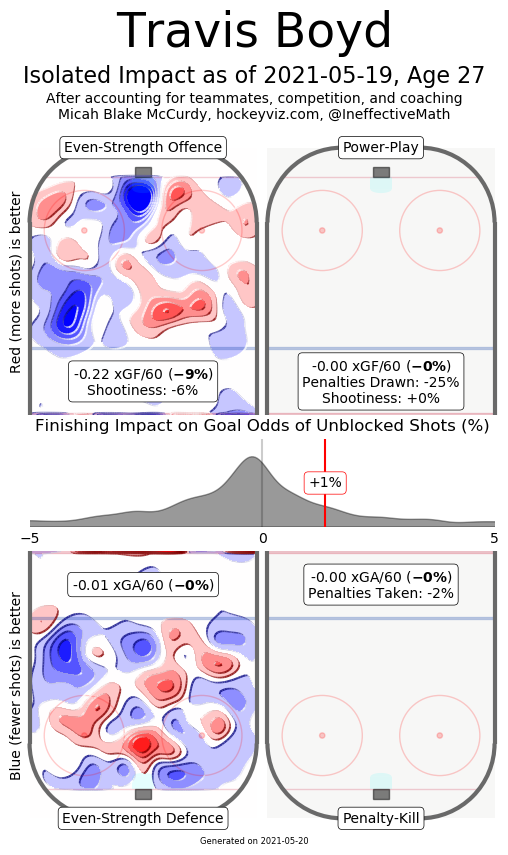 The trouble is that Boyd didn’t stand out enough down the stretch as other bottom-six forwards were getting into the lineup. Boyd had just two goals and no assists in 19 games and the Canucks were pretty badly out-chanced when he was on the ice. Maybe a contract is unlikely, but a league-minimum deal where he could be sent down to the AHL would be low-risk.

Graovac might be more likely to get that contract than Boyd. He is also a centre and had some strong, standout games towards the end of the season. He handles the puck well for a big guy and showed flashes of offensive upside, with 4 points in 14 games.

Here’s the problem: Graovac is poor enough defensively that he just can’t be an NHL regular. He had a 37.02% corsi while being significantly sheltered from tough competition, which is very, very bad. 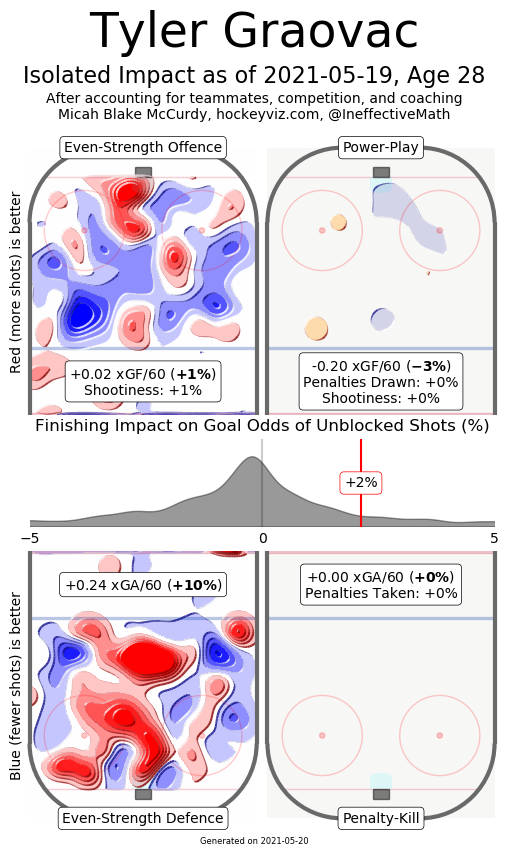 There were a few games down the stretch where Graovac looked like a legitimate NHLer, but they were countered by games where he and his linemates got steamrolled. Graovac is a good bet to get a two-way contract to centre a line in Abbotsford, but hopefully the Canuucks won’t need him to play NHL minutes next season.

Finally, there’s Bailey, who only played three games before a hit from behind by Milan Lucic caused a shoulder injury that ended his season. It’s truly unfortunate, because Bailey was looking great before his injury.

It honestly looked like the 25-year-old Bailey had taken a step forward in his game after 47 points in 53 games in the AHL last season. His 68.42% corsi was best on the Canucks, albeit in a very small sample size. The Canucks out-attempted their opponents 26-to-12 with Bailey on the ice at 5-on-5 and out-chanced them 13-to-4. 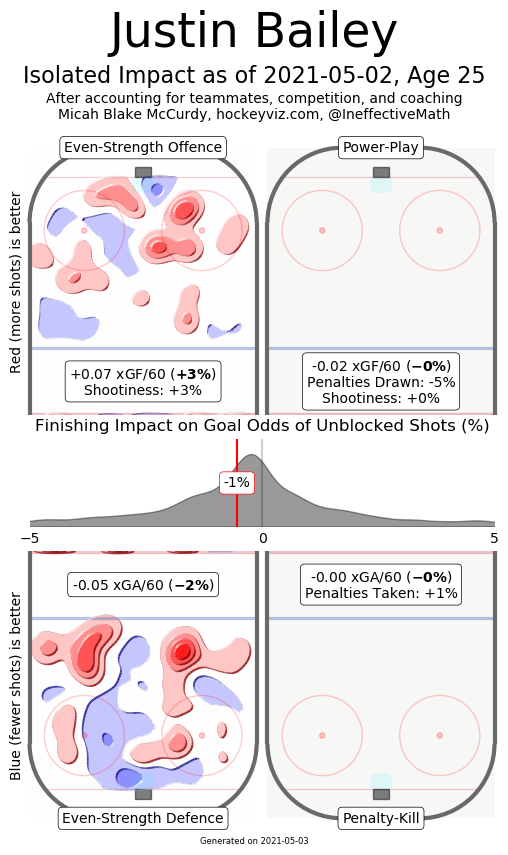 Maybe the good times wouldn’t have lasted, but it really seemed like Bailey had found a role in the Canucks’ bottom-six. At 6’4” and with superb top-end speed, the winger seems like a player that could be a good fit on a hard-forechecking fourth line.

Bailey’s recovery from his shoulder surgery complicates matters, but he’s worth re-signing to see if he can provide a boost to the bottom-six at a bargain basement price.

What are reasonable expectations for Vasili Podkolzin's rookie season?
May 31, 2021 6:09 PM