The former Canucks winger spoke to Don Taylor and Rick Dhaliwal about the mental side of his recovery and his eagerness to get another NHL opportunity.
Jun 10, 2021 4:44 PM By: Daniel Wagner 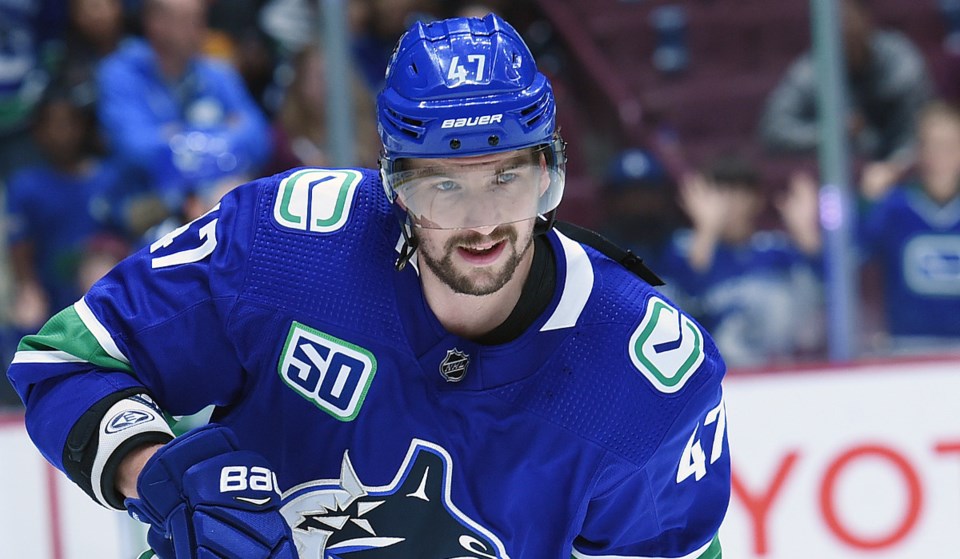 Sven Baertschi dealt with depression and anxiety after his concussion in 2018. Now he heads to free agency looking for a fresh start.Dan Toulgoet / Glacier Media

When it comes to concussions in the NHL, there are two aspects to recovery. There’s the physical side — treating and recovering from the physical symptoms caused by a concussion — but there’s also a mental side.

Sven Baertschi knows this all too well. The winger has suffered multiple concussions during his time playing hockey. His last one completely derailed his career.

Baertschi opened up about the mental struggle he faced after that concussion in an interview with Don Taylor and Rick Dhaliwal on CHEK TV.

“I remember getting hit there, then right after I got hit, instantly I felt depressed, like I was letting the team down, like I’m out of the game,” said Baertschi. “I just had all these feelings. It’s hard to explain, where do they come from, right?”

The hit came nine games into the first season of his new, three-year contract with the Vancouver Canucks. For several seasons, Baertschi had been a solid second-line forward for the Canucks, finding chemistry with Bo Horvat and contributing to the power play. Suddenly, his strong start to the season came to a crashing halt.

Golden Knights winger Tomas Hyka hit Baertschi in the head from the blindside, spinning him to the ice. Baertschi tried to stay in the game but had to leave after a few more shifts. He missed a total of 56 games — Hyka received neither a penalty nor a suspension.

Early on, the physical symptoms of the concussion were the biggest issue for Baertschi. He tried to return to the ice a few weeks after the hit but could not continue.

“I had to stop this exercise after 15 minutes because I was so dizzy,” said Baertschi at the time. “As soon as I move and spin properly, I see everything around me completely blurry and have a headache.”

Eventually, the mental struggle proved to be the tougher challenge.

“I can’t explain how it happened, but I was going through that stage, going through a depression stage,” said Baertschi. “Then all of a sudden, you get these anxious feelings that start creeping in as you come back. I wasn’t able to go to a grocery store and stuff, I just had this anxiousness. Instantly, I started shaking. Like, what is this, where is this coming from?”

For Baertschi, the uncertain origin of these feelings and emotions made it so much worse. Fortunately, he was able to get the help he needed.

“You just go through this whole process where things are happening you can’t really explain and have answers for and so that makes it even harder,” he said. “I had to go through that process to understand what’s happening. I saw lots of specialists, saw a great psychologist in Vancouver who taught me all about mindfulness meditation, and that was the turning point right there.”

“Each person’s different,” he added. “There’s some guys that come back fairly quickly after and it doesn’t have much of an impact, mental health-wise, but for me, that’s what the impact was, the biggest impact.”

Sorting out the mental side of his concussion was the key to Baertschi’s recovery. From there, he was able to return to playing, finishing out the 2018-19 season with four games with the Canucks.

“I think his numbers don’t lie,” said Horvat after Baertschi’s return. “When he’s been in the lineup, he’s been scoring and producing, so it’s unfortunate that he had that one hit. I think, for him, to go through that adversity and still come back and play as well as he has, I think that shows a lot about him. He’s a huge part of this team, even in the room. Having him around the guys, it lifted us.”

"I've had to learn a lot about myself the last couple of years."

It seemed like a healthy Baertschi could potentially have a significant impact for the Canucks the following season. Instead, he was cut during training camp and sent down to the Utica Comets.

According to general manager Jim Benning, who had signed Baertschi to a three-year contract just a year prior, the addition of wingers like Micheal Ferland, J.T. Miller, Josh Leivo, and Tanner Pearson meant the Canucks had enough skill in the lineup.

“It's the evolution of us as a team,” said Benning at the time. “My job is to try to improve the team, sign better players, trade for better players over the summer, so we got better players in camp. So, we were going to have to make tough decisions.”

Getting cut by the Canucks represented a different type of mental challenge for Baertschi as he suddenly found himself in the AHL after thinking he had secured his spot in the NHL.

“It’s been tough. I’ve had to learn a lot about myself the last couple of years,” said Baertschi. “It’s definitely not easy at the beginning being sent down and trying to continue to try to play to the best of your abilities and continue to grind it out.”

"Baertschi has been huge for growing my game."

To Baertschi’s credit, he embraced the challenge, putting up 46 points in 43 games. Beyond just playing well on the ice, however, Baertschi also found himself in an unexpected leadership role.

“All of a sudden I was one of the oldest guys in the room, a guy that’s played almost 300 NHL games surrounded by a bunch of young guys, especially this year,” said Baertschi with a laugh. “Compared to before, I was looking at Hank and Danny as the older guys and good examples. All of a sudden, I was the person guys were looking at and trying to learn from.”

The younger players who have spent time in Utica have given Baertschi a lot of credit for helping them along the way.

“Baertschi has been huge for growing my game,” said Kole Lind in an interview with Chris Faber at Canucks Army. “This is kind of a crappy situation for him but he’s been amazing for me. Since getting sent down, he’d just try to help the young guys every day. From a leadership standpoint, he’s been absolutely amazing. Not just to me but all the young guys down there, he’s done a great job of it. I’d bounce questions off him every day.”

“I sent Lindy a text when he got called up and I said, ‘You’re welcome,’” said Baertschi, laughing. “I want to be the guy that gets called up, but it was awesome to see Lindy being called up finally, that was a good feeling for me as well that I was able to help him along the way.”

According to Baertschi, he not only wanted to prove to any teams that might be watching that he was willing to keep working in the AHL, but he also knew he had to help out the young players as much as he could.

“What am I going to do, go and be a crappy teammate with all these young guys coming in that sort of look at me for help and want to make it to the NHL?” said Baertschi. “That’s just not the right thing to do.”

"I'm not looking for any money, that's for sure."

Now Baertschi enters free agency after two seasons in the AHL, just looking for another chance to prove he belongs in the NHL.

“The good thing is, I’m not looking for any money, that’s for sure,” said Baertschi, laughing again. “I’m just looking for an opportunity and I’m going to put in the work this summer and hopefully something happens.”

Meanwhile, the Canucks are looking for more scoring out of their bottom-six forwards. According to Horvat, that was the team’s biggest issue this past season, as the team tumbled down the standings to finish last in the all-Canadian North Division.

“In order to win in this league and to win in the playoffs...not only do your top lines have to score but you have to have that depth in your lineup,” said Horvat, as he aired his frustration over missing the playoffs yet again.

Benning also made forward depth a focus as he promised an “aggressive” offseason.

“We want to add guys that can support, supplement our top 9 forwards, we want to try to have three scoring lines,” said Benning. “So, we're looking at a different type of player here. We're looking at players that drive offence that we can play with our other offensive players because we need to score more, we need to spend more time in the other team's end.”

There’s a certain amount of irony in Benning acknowledging the need for more scoring depth after two seasons where Baertschi has been buried in the minors because the team supposedly had enough skill.

Now Baertschi will look to provide that scoring depth for another team. While he hasn’t been claimed on waivers over the past two seasons, now his contract will no longer be an impediment. Perhaps on a league-minimum contract, a team could find a spot for Baertschi.

“Going into this offseason, I hope that maybe other teams noticed that I wasn't just [in Utica] to finish off my contract, I was actually there to put in the work,” said Baertschi. “It doesn’t matter what you throw in front of me, I’m just going to keep battling.”

With a mandate to make the playoffs, Benning promises “aggressive” offseason
May 21, 2021 4:05 PM
Comments