What are reasonable expectations for Vasili Podkolzin's rookie season?

The Vancouver Canucks delivered some good news over the weekend, announcing that they have signed their top prospect, Vasili Podkolzin, to a three-year, entry-level contract. Podkolzin has always been crystal clear about wanting to play in the NHL but there’s always that lingering uncertainty with Russian prospects that they could stay in Russia and play in the KHL.

While the Canucks haven’t had much luck bringing young prospects into depth roles, they’ve had some excellent fortune with their top prospects. Brock Boeser, Elias Pettersson, Quinn Hughes, and Nils Höglander have all stepped immediately into big roles with the Canucks over the last four seasons.

Boeser, Pettersson, and Hughes were all finalists for the Calder Trophy as rookie of the year, with Pettersson bringing home the prize. While Höglander is unlikely to make it four Calder finalists in a row, he still had an excellent season of his own.

Höglander came in and blew reasonable expectations out of the water with 13 goals and 27 points in 56 games — a 19-goal, 40-point pace over a full 82-game season. Höglander did that with minimal opportunity on the power play and was second on the Canucks behind Brock Boeser in 5-on-5 scoring.

Can Podkolzin similarly exceed expectations for the Canucks next season? First we’ll have to set where those expectations should be.

In terms of style of play, Canucks fans can expect a hard-hitting, puck-protecting, battle-winning two-way forward. That much has been evident every time Canucks fans have had a chance to watch him play. Podkolzin plays with a relentless work ethic that will quickly endear him to Canucks fans.

He’s also an excellent playmaker, with a more refined passing game than scoring game at this point in his development. There’s potential in his goalscoring as well, with a willingness to drive the net and good hands in traffic to finish when he gets there.

In toto, Podkolzin is a two-way power forward who has drawn comparisons to a young Mark Messier from such luminaries as Igor Larionov.

That kind of blustery praise has a tendency to overhype a young prospect. After all, even if Canucks fans hate Messier, he’s in the Hall of Fame with 1887 career points. Can we set some more reasonable expectations for Podkolzin’s rookie season?

Few Russians go from the KHL to the NHL at 20

One way to do that is to look at how similar players in the KHL performed when they made the jump to the NHL. The trouble is, not many Russians actually play in the NHL at the age of 20, at least in recent years.

Since 2010, just 26 Russians have played in the NHL at the age of 20. Only 18 of those are forwards and just seven of those forwards played at least 20 games. Of those seven, just one played in the KHL as a 19 year old. 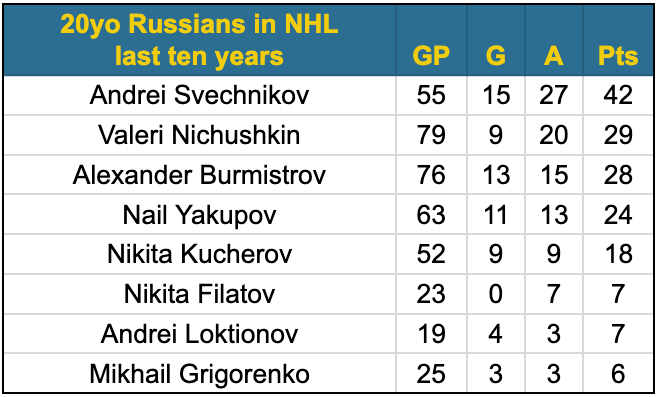 20-year-old Russians in the NHL in the last ten years with more than ten games played.

That one player was Nikita Filatov, who couldn’t be any less similar to Podkolzin as a prospect. Filatov had all sorts of skill and speed, but lacked the work ethic and hockey sense to build on those tools, while Podkolzin’s game is built around his work rate and hockey sense. Besides, Filatov’s season in the KHL at 19 was because he asked to go back to Russia after he was unhappy with his playing time and role with the Columbus Blue Jackets, a very different situation to Podkolzin.

It’s understandable why there wouldn’t be many 20-year-old Russians in the NHL. The KHL does their best to keep young players in Russia. SKA St. Petersburg tried to get Podkolzin to sign in the KHL for a few more years, for instance, but he was intent on signing with Vancouver as soon as possible.

Most Russians that play in the NHL at a young age came over to North America much sooner. Some, like Andrei Svechnikov,  Alexander Burmistrov, and Nail Yakupov, played major junior hockey in Canada in their draft year, for instance, while others arranged to get out of the Russian system right after they were drafted.

The truth is, most players that produce the way Podkolzin did in the KHL at 19 don't go on to play in the NHL or don't experience much success if they do. Guys like Bogdan Yakimov, Anton Slepyshev, and Andrei Svetlakov are not exactly a murderer's row of NHL talent.

There are many, many good reasons to believe Podkolzin will buck that trend and players like Artemi Panarin and Vladimir Tarasenko, who didn't score much more than Podkolzin at 19, give reasons for optimism for the future.

Panarin and Tarasenko took a bit longer to get to the NHL, however. For next season, we only have a few comparable players for Podkolzin.

Among the 20-year-old Russians in the NHL over the past ten years, the closest parallel to Podkolzin is Grigori Denisenko, who played just 7 games for the Florida Panthers as a 20 year old this past season.

Denisenko provides an interesting comparison for Podkolzin in several ways. He was also a first-round pick, selected 15th overall by the Panthers in 2018. Like Podkolzin, Denisenko also captained the Russian World Junior team. Most intriguingly, he put up a very similar amount of points as a 19 year old in the KHL.

Podkolzin had 11 points in 35 games during the KHL regular season this year, while Denisenko had 12 points in 38 games when he was 19. Denisenko is less accomplished defensively and lacks Podkolzin’s size and strength, but it’s hard to ignore their parallel production.

Denisenko had 4 points in 7 games for the Panthers, while tallying 9 points in 15 games in the AHL for the Syracuse Crunch. Let’s call that the low end of what we could expect from Podkolzin: a transitional year as he adapts to playing in North America, with games in both the NHL and AHL.

It’s fair to expect a little bit more out of Podkolzin, however. Unlike Denisenko, Podkolzin was fantastic in the KHL playoffs.

In the playoffs, Podkolzin got a little bit more opportunity, playing 14:02 per game, and made the most of it. He matched his regular season point total of 11 in just 16 games to lead SKA St. Petersburg in scoring. He was seventh in the KHL playoffs in points and all of the players ahead of him played at least five more games than he did.

In fact, Podkolzin’s playoffs was one of the best all-time for an under-20 player. His 11 playoff points are the most ever by a 19-year-old and tied with an 18-year-old Vitali Kravtsov.

That might make Kravtsov an interesting comparable for Podkolzin — he’s about the same size and was the 9th overall pick for the New York Rangers in 2018 — but he sets the bar even lower than Denisenko: he played his 20-year-old season in the AHL and had 4 points in 20 games for the Rangers when he cracked their lineup as a 21 year old this past season.

So what might be some higher expectations for Podkolzin? For that, we can look towards another Russian player to whom Podkolzin has been compared: Valeri Nichushkin.

Like Podkolzin, Nichushkin was a 10th-overall pick. Neither produced much in Russia in their draft years, but had strong performances in international play — Podkolzin at the Hlinka-Gretzky tournament, Nichushkin at the World Under-18 Championship. They’re both big power forwards with strong two-way games, though Nichushkin is a little bigger and Podkolzin has a bit more offensive upside. They both even play right wing.

Nichushkin made the jump to the NHL at 18 and immediately produced, putting up 34 points in 79 games for the Dallas Stars. Unfortunately he had hip surgery in his second season, then failed to progress much in his third season as a 20 year old, with 29 points in 79 games.

Nichushkin returned to Russia for two seasons before returning to the NHL. When he did, he found another level in his defensive game, even earning some Selke consideration last season. With the Colorado Avalanche over the last two seasons, Nichushkin has become one of the most dominant puck possession players in the NHL.

That would be an excellent outcome for Podkolzin, who already has a well-rounded defensive game. The hope, of course, would be that Podkolzin can dominate puck possession while also putting up a few more points than Nichushkin.

Still, Nichushkin’s 20-year-old season seems like a very reasonable place to set our expectations for Podkolzin: 9 goals and 20 assists in 79 games. That may not seem like much, but that’s legitimate second-line production in the NHL.

If Podkolzin can tally 29 points while also playing a strong puck possession game, that would be a solid rookie season.

Vasily Podkolzin apologizes on Instagram for Russia's performance at the 2021 World Junior Championship
Jan 6, 2021 9:59 AM