Who’s going to kill penalties for the Canucks next season?

The Canucks' personnel changes this offseason will mean a new look on the penalty kill.

That’s partly because they were one of the most heavily penalized teams in the NHL — they led the league in shorthanded ice time — but also because their penalty kill was mediocre, killing only 79.8% of their penalties.

The Canucks badly need to take a step forward in that area of special teams but they’ll also have to deal with a lot of turnover in penalty-killing personnel.

Four of the team’s top ten penalty killers from last season are gone, including Alex Edler, who led the entire NHL in shorthanded ice time. Also gone are Nate Schmidt, Antoine Roussel, and Jay Beagle, who was the team’s top penalty-killing centre when healthy.

In their place come a few new additions who could play on the penalty kill: Oliver Ekman-Larsson, Tucker Poolman, and Jason Dickinson, as well as a handful of depth players like Luke Schenn, Justin Dowling, and Phillip Di Giuseppe.

That’s a fairly significant change for the Canucks’ penalty kill but they’ll also have a change behind the bench.

Before you expect miracles from Shaw, keep in mind that the Blue Jackets’ penalty kill was worse than the Canucks’ last season, although it was the best in the NHL in the 2018-19 season.

So, let’s take a look at who played the penalty kill for the Canucks last season, how they performed, and where the newcomers might fit.

When everyone was available and healthy, the Canucks’ pairs of forwards and defencemen were fairly consistent on the penalty kill. That’s important because penalty killers need to be able to read off each other and rely on each other — knowing where everyone else is on the ice is key for clogging up passing and shooting lanes to prevent chances.

Likewise, Edler and Tyler Myers were the top penalty kill pairing on defence, while Schmidt played with either Travis Hamonic or Jordie Benn. The Canucks will have all new pairings at both forward and on defence when killing penalties.

Other forward pairings on the penalty kill included Jimmy Vesey and J.T. Miller — Vesey is unsigned but unlikely to return — Bo Horvat and Tanner Pearson, Matthew Highmore and Pearson, and Sutter and Motte.

Let’s look at how the Canucks penalty killers performed last season, focusing primarily on unblocked shot attempts against and expected goals against. Here are all the Canucks skaters who spent at least 15 minutes on the penalty kill. 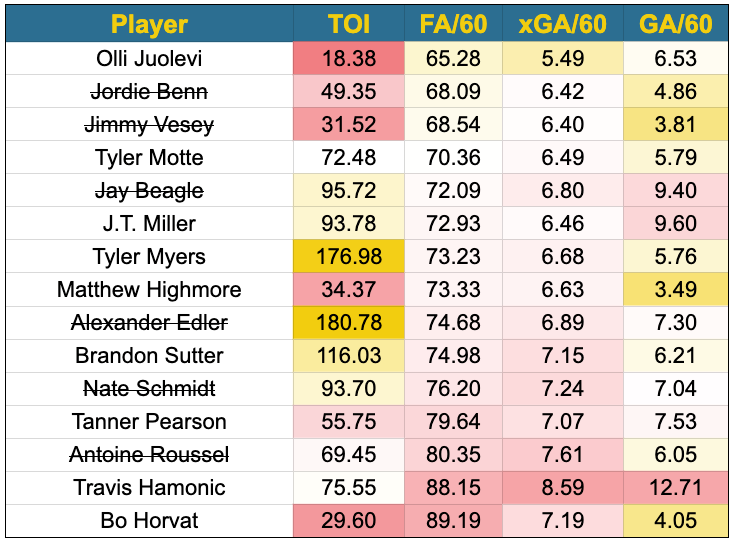 The charts are coloured according to where the statistic falls in comparison to the rest of the NHL. Gold is above the median, while red is below the median.

FA/60 stands for “Fenwick Against per 60 Minutes,” which is unblocked shot attempts. xGA/60 is expected goals against and GA/60 is goals against.

When looking at these numbers, the first caveat is that they’re an imperfect representation of a player’s ability to kill penalties. Penalty killing is done as a complete unit, so is even more dependent on teammates than other aspects of hockey. In addition, these statistics don’t capture one of the most important aspects of power play chance creation — pre-shot puck and player movement.

Still, a player who is on the ice for an above-average number of shot attempts against is a worrying sign, particularly when it’s so far above average, such as with Travis Hamonic and Bo Horvat.

Horvat never quite developed into the defensive whiz he was billed as when he was drafted, so it’s a good thing he became such a great offensive catalyst and power play specialist. Beyond the Canucks coaches’ preference to using bottom-six forwards on the penalty kill, there’s a reason Horvat has received limited shorthanded minutes in his career.

Hamonic’s appearance at the bottom of this list is a little more concerning. He was on the ice for the highest rate of goals against on the penalty kill to boot.

It should be noted that Hamonic has been better on the penalty kill in the past. Hopefully, this is just a bump in the road and not a sign of decline.

In happier news, Olli Juolevi’s limited minutes on the penalty kill last season were some of his best moments on the ice for the Canucks. He worked hard on the penalty kill in the AHL with the Utica Comets and it showed, as he was legitimately effective, albeit in a small sample size.

That might give Juolevi the leg up on getting into the lineup, as the Canucks don’t have any other penalty killing options on the left side of the defence.

It’s already well known that Motte is an effective penalty killer and J.T. Miller did about as well as Jay Beagle when he needed to fill in. Myers and Highmore were close to league average in shot attempts and expected goals against and better than average in goals against.

From these statistics, Highmore or Miller look like better options for the penalty kill than Pearson.

Where do the Canucks' new acquisitions rank on the penalty kill?

Let’s take a look at the new arrivals and how they performed on the penalty kill last season in relation to the rest of the league.

The Vancouver Canucks' new acquisitions on the penalty kill. Stats via NaturalStatTrick.com

None of the Canucks’ other additions played a significant amount on the penalty kill. We might still see players like Schenn, Dowling, or Di Giuseppe at some point, however.

The good news: Dickinson is a solid penalty killer, about the same as Beagle. That jibes with his reputation as an excellent defensive forward at even-strength. He’s not a beast on the penalty kill, by any means, but he should do well.

One issue, however, is that Dickinson is not particularly strong on faceoffs, with a 46.3% faceoff percentage last season. That dropped to an ugly 29.4% on the penalty kill. For that reason, it may be a good idea to partner him with Miller to take faceoffs, though the extra shorthanded minutes for Miller could prove tiring.

On defence, Ekman-Larsson profiles similarly to Edler or Schmidt, though he allowed a higher rate of unblocked shots against. He can capably play on the penalty kill, though he hasn’t been used as the primary penalty killer for the Arizona Coyotes in several years. Those minutes were typically played by Niklas Hjalmarsson and Alex Goligoski.

From watching Ekman-Larsson play, he does his best work on the penalty kill when he uses his reach and excellent stick to take away lanes and poke pucks away, but he sometimes struggles with net front battles. He’ll likely take over Edler’s minutes as the Canucks are unlikely to use their other top left-side defender, Quinn Hughes, on the penalty kill.

Poolman wasn’t particularly good on the penalty kill last season, giving up a high number of unblocked shot attempts when he was on the ice. He profiles similarly to Hamonic. He wasn’t on the ice for many goals against, but that’s primarily because the Jets’ goaltenders — mainly Connor Hellebuyck — were outstanding behind him.

Do the Canucks have the personnel to improve the penalty kill?

The troubling statistical profiles of Poolman and Hamonic are concerning, as it means the Canucks don’t really have a good option on the right side behind Myers. Combine that with no real option on the left side behind Ekman-Larsson other than Juolevi, and things look a little shaky when it comes to the defence.

If rookie Jack Rathbone secures a spot on the third pairing ahead of Juolevi, the Canucks will likely be hesitant to use him on the penalty kill. In that case, the Canucks may need to use both Hamonic and Poolman on the penalty kill, with one on their off-side and hope that their performance in the coming season is better than these statistics would indicate.

It would make sense to have Ekman-Larsson play with one of Hamonic or Poolman on one penalty kill pairing — likely the same defenceman he’ll be paired with at even strength, then pair Myers with Hamonic, Poolman, or Juolevi.

Luke Schenn will also be available on the right side when he’s in the lineup, though he didn’t kill penalties much at all with the Tampa Bay Lightning last season.

Overall, there are some reasons to be worried about the defence on the penalty kill, but things look better when it comes to the forwards.

Sutter and Motte make sense as one pairing, then Dickinson could play with Highmore or Miller, with Pearson available to fill in. The Canucks might also want to look at rookie Vasily Podkolzin on the penalty kill, as that’s a role he’s been comfortable with in Russia.

Another option could be Nils Höglander, who killed penalties in Sweden and has the work rate and speed to be effective in that role. If he makes the team or gets called up, William Lockwood should also get a look on the penalty kill, as should Di Giuseppe, who has been an effective defensive player at even strength.

The big question is whether or not the Canucks actually improved. It’s hard to answer that question before seeing them in action, but the defence is the biggest concern. While the departing Edler and Schmidt were not the best on the penalty kill, the Canucks didn't replace them with better penalty killers.

There may also be an adjustment period early in the season as players unfamiliar with each other learn to work together. Hopefully, it all comes together quickly and smoothly — the Canucks will need their special teams to excel if they want to be one of the top teams in the Pacific Division.