Did the Canucks actually improve their defence? Y'know, defensively?

The Canucks made some major changes on defence but will they be better defensively in the 2021-22 season?

Over the last week, the Vancouver Canucks have completely overhauled their defence.

Frankly, their defence needed an overhaul. According to hockey analytics site Natural Stat Trick, the Canucks allowed the most scoring chances in the NHL by a wide margin. Even ignoring chances, only two teams allowed more shots on goal last season.

Something clearly needed to change and Canucks GM Jim Benning was as aggressive as he promised to be. From last season, Alex Edler, Nate Schmidt, and Jordie Benn are gone, as are depth defencemen Jalen Chatfield and Brogan Rafferty. In their place, Benning traded for Oliver Ekman-Larsson and signed Tucker Poolman and Luke Schenn, as well as depth defencemen like Brad Hunt and Brady Keeper.

They even added Brad Shaw to the coaching staff to help address their defensive systems.

As a result, the Canucks defence will look substantially different. The question is if it will be any better, particularly when it comes to preventing shots and scoring chances.

There was a clear philosophy behind the defencemen acquired and signed by Benning, including re-signing Travis Hamonic. The Canucks wanted a little more size on the backend, wanted an even balance of right-hand shots to left-hand shots, and wanted stay-at-home types to complement their more offensive-minded defencemen.“We wanted to get bigger back there, more physical,” said Benning to the media on Wednesday. “On the left side with OEL and Quinn [Hughes] and maybe Jack Rathbone if he has a good camp — he played well for us at the end of the year — we’ve got some mobility, you know, some guys that can get back and turn the puck up ice.

“I think we tried to identify some guys that would be good fits with their style of game on the right side and now we’ve got some physical guys that we feel are good defensive players to help support them.”

Benning clearly thinks that the changes he and his staff made have improved the defence.“As a six-man unit, I think we’re better,” said Benning. “I think we have a good mix of guys that can get back and transition the puck up ice, with more stay-at-home, bigger, more physical guys.”

The numbers are not pretty

It’s hard to say exactly how a defence corps will perform together, particularly one with several new faces and potentially a rookie in Rathbone. We can, however, look at how the individual players have performed in the past.

The big question when I look at the Canucks defence is who will be the matchup or shutdown pairing? Who will play the tough minutes against the best players in the NHL, like Connor McDavid, Auston Matthews, and Nathan MacKinnon? How will the Canucks prevent the sky-high numbers of shots and scoring chances that they have given up in recent years?

I looked at the 230 NHL defencemen who played at least 950 minutes at 5-on-5 over the last three seasons. I chose 950 minutes in order to include Schenn, who played just over 985 minutes, in the sample.

Where do the Canucks’ defencemen for next season rank in some key defensive statistics over that time?

Defensive rate statistics for the Canucks' 2021-22 defencemen via NaturalStatTrick.com

All of the data is at 5-on-5 and is adjusted for score and venue. The data comes via Natural Stat Trick. Here’s a quick glossary:

I also included where Jack Rathbone and Olli Juolevi would rank, though the small sample size for each of them should provoke caution when drawing conclusions.All in all, it’s not a pretty picture. The Canucks’ presumed top-six on defence all ranked in the bottom half of each of these defensive statistics. In fact, for the most part, they all rank in the bottom third.

Ekman-Larsson and Poolman have struggled defensively

Let’s focus for a moment on the Canucks’ two most important acquisitions on defence: Oliver Ekman-Larsson and Tucker Poolman.

Ekman-Larsson ranks near the bottom of the league in the rate of high-danger chances against. That aligns with his isolated impact heatmap from HockeyViz, which shows a sea of red in front of his own net. He just has not been good at defending the home plate area in the defensive zone over the last several years. 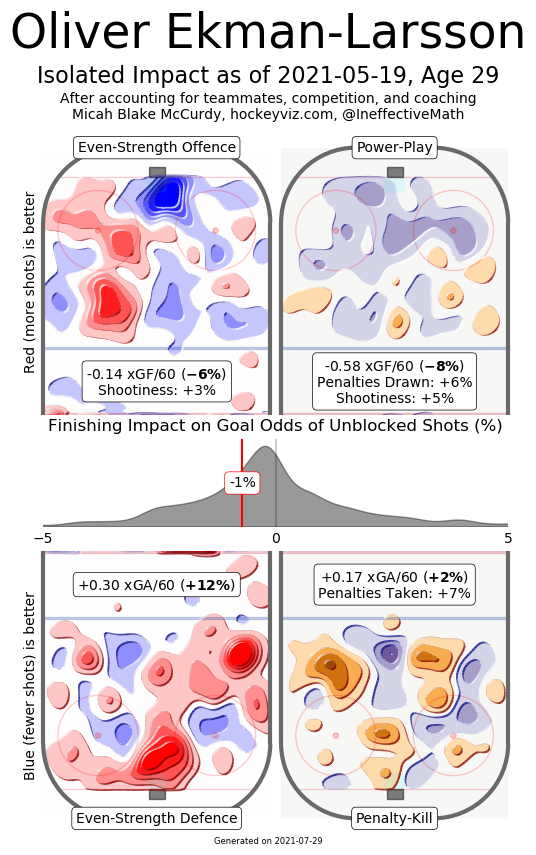 Oliver Ekman-Larsson isolated impact heatmap via HockeyViz.com
What’s worrying is that Poolman is even worse. Among 230 defencemen, Poolman ranks 220th in the rate of high-danger chances against.

This is particularly concerning because it’s entirely possible that Ekman-Larsson and Poolman will get paired together and be expected to play in a match-up role.

After acquiring Ekman-Larsson, Benning said that he thinks the veteran will be the team’s “number one defenceman” and will be “a match-up guy playing against the other team’s top lines.”

Head coach Travis Green has avoided using Tyler Myers in a match-up role, which is understandable — his numbers are easily the worst in the above sample. That means that either Poolman or Travis Hamonic will partner with Ekman-Larsson and it seems likely that they’ll start the season with Hamonic paired with Hughes.

“We think that in Tucker’s game, he has some of that in him where he’s mobile, he’s long, he has a good stick, he’s a good defensive player and he can play with one of our puck movers on the back end and help complement their game,” said Benning.

It’s troubling that the numbers just don’t back up this assertion.

It’s not about quality of competition

There’s one key thing we need to talk about when it comes to these defensive statistics: quality of competition. It’s likely one of the first things that comes to mind, particularly when you see the two defencemen that the Canucks acquired who top this list: Brad Hunt and Luke Schenn.I put asterisks on Rathbone and Juolevi because of the small sample size, but Hunt deserves an asterisk as well. Hunt put up exceptional defensive results but did so while playing very sheltered minutes on the third pair with the Minnesota Wild.

Still, it’s good to know that Hunt can hold his own in those minutes. If the Canucks have injuries, he can capably fill in on the bottom pair.

Likewise, Schenn showed that he can defend the front of the net, with solid rankings in both high-danger chances and expected goals against. But those results mostly came while playing heavily sheltered minutes on the third pairing for the powerhouse Tampa Bay Lightning.

It’s enough to make you wonder whether the poor results from the rest of the Canucks defence come naturally from playing against tough competition, but that isn’t the case. Many of the players at the top of these rankings play very difficult minutes for their teams, like Jared Spurgeon, MacKenzie Weegar, and Charlie McAvoy.Those defencemen play those tough minutes because they’re so good at limiting chances and shots against. It’s not just about the quality of the team around them either. For example, both Alex Goligoski and Jakob Chychrun put up significantly better defensive numbers than Ekman-Larsson with the Arizona Coyotes while facing tougher competition.

Besides, it’s not even true.

None of the defencemen here faced top lines at an above-average rate last season. As mentioned, Hunt and Schenn were both significantly sheltered. Hughes and Ekman-Larsson faced first lines at a slightly below-average rate last season and Hamonic, Myers, and Poolman were all around league average.In other words, all of these defencemen faced average or below-average competition and still leaked shots and scoring chances against. For the Canucks, the matchup role was given to Alex Edler and Nate Schmidt, who faced very difficult competition. Despite those tough minutes, Edler and Schmidt had the lowest rate of high-danger chances against among Canucks defencemen last season. Those are not going to be easy minutes to replace.

Is the whole greater than the parts?

There’s a chance, of course, that this all works out for the Canucks. Sometimes in sports, the whole is truly greater than the sum of its parts.

Perhaps Ekman-Larsson, in a new environment, will thrive and perform more like the top-pairing defenceman he was in the past. Maybe Hamonic will settle in with a more normal offseason and a proper training camp. Perhaps with the right partners, the Canucks’ defencemen will click and find the chemistry they need to play sound defence.

The Canucks could even hope that with their improved forward group, they spend a lot more time in the offensive zone and less time getting stuck in their own zone.

Then there’s the wild card of Jack Rathbone. In his eight games last season, he had a tough time defensively, but he came into the lineup in a difficult situation at the end of the season when the Canucks had very little to play for.

If Rathbone can be stronger defensively than his small sample last season showed, he could help the Canucks defence immensely.

But that’s a lot that needs to go right for the Canucks to improve defensively next season. There’s reason to worry that Thatcher Demko and Jaroslav Halak might need to stand on their heads to keep the Canucks in games.