"I definitely felt like I found a home in Vancouver at the end of last year and it carried over into this year."

Tanner Pearson’s first full season in Vancouver was a smashing success compared to his previous year.

In 2018-19, Pearson was traded twice, floundering in both Los Angeles and Pittsburgh, but as soon as he arrived in Vancouver, something seemed to click. He put up 9 goals and 12 points in 19 games with the Canucks at the end of the 2018-19 season, then proved it wasn’t a fluke in the 2019-20 season.

Pearson found a home in the top six alongside Bo Horvat. The two were practically attached at the hip all season — around 680 of the 906 minutes Pearson played at 5-on-5 were with Horvat — and they proved to be a potent combination, finishing third and fourth in goals on the Canucks.

The duo not only provided offence, but were regularly matched up against top lines in a shutdown role.

“Right from the get go, it’s how I was brought up in this league,” said Pearson. “Defence came first. Start from there, then make your way to the O-zone and let skill and smarts take over. Bo’s a heck of a centreman. As time went on, we got the hard matchups and playing with Bo, that’s who they want on those matchups.”

Pearson played in every situation for the Canucks. Whether it was the power play, penalty kill, defending a lead, or when they desperately needed a goal, Pearson would hit the ice. He was an integral part of the team in a way he wasn’t in Los Angeles or Pittsburgh the year before.

Overall, it was a strong season for the veteran winger, who attributed it to one key component.

“I think it’s just confidence,” said Pearson. “Confidence is such a big thing within professional sports and if you have it, things seem to go your way. Last year helped me out a lot: how crappy it was, being traded twice, but I definitely felt like I found a home in Vancouver at the end of last year and it carried over into this year.

Going to the rink must have been easy all year long for Pearson. Let’s break down his 2019-20 season in the Report Card.

Despite the pandemic-shortened season, Pearson still hit a career high in points, putting up 21 goals and 45 points in 69 games. It was the second time in his career he scored 20+ goals.

That was good for fourth in goals and fifth in points during the regular season and he added 8 points in 17 playoff games to finish just behind Brock Boeser for sixth on the Canucks in points.

His overall numbers were goosed by 6 empty net goals, a new franchise record and tied for the league lead this season. On the one hand, that suggests his career year might have had a little help. On the other hand, it shows that he was trusted to close out tight games and did so with aplomb.

Pearson was a staple in the top six, finishing fourth among forwards in ice time, averaging 16:31 per game.

Even with a big chunk of goals coming with an empty net, Pearson still provided a solid chunk of the Canucks’ scoring and was a reliable top-six forward. That gets him an A-.

Pearson’s underlying statistics are not as flattering as his point totals and paint the picture of a slightly below-average NHL forward, with one metric making him look significantly worse than that. 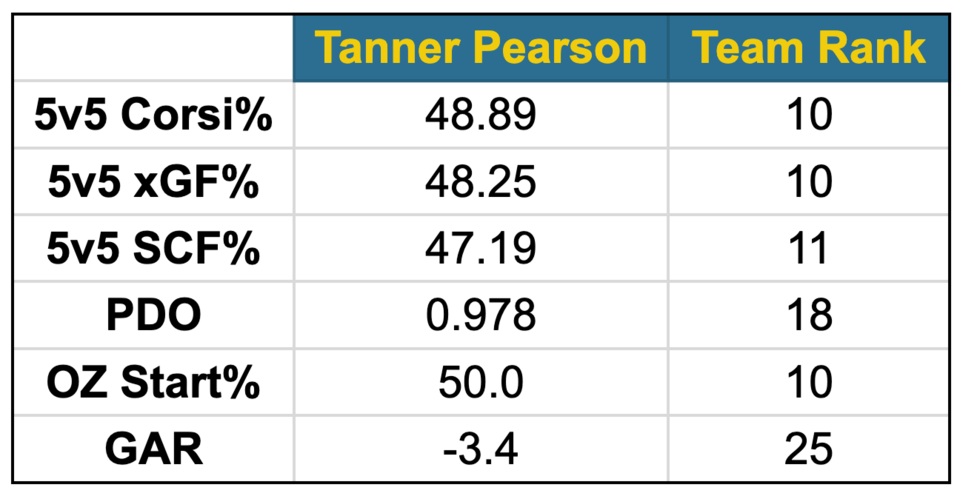 At 5-on-5, Pearson’s corsi (shot attempts) percentage was below 50%, indicating the Canucks were out-shot with him on the ice. That’s also reflected in his share of expected goals and scoring chances, which are actually a little worse than his corsi, indicating that the Canucks didn’t just give up a lot of shots, but gave up quality scoring chances when Pearson was on the ice.

When you take into account that Pearson was playing in a matchup role, those numbers look a little better. It’s also worth noting that Pearson’s zone starts were equally split between the offensive and defensive zone, so his possession statistics are not a result of being buried in the defensive zone. He wasn’t thrown to the wolves in his usage.

His PDO, a statistic that combined on-ice shooting percentage and save percentage as a proxy for luck, was one of the lowest on the Canucks. He was actually unlucky not to get more points at 5-on-5, which is a positive sign, particularly when you consider that he’ll be unlikely to get as many empty net goals next season.

Where Pearson really looks bad is when you look at the Goals Above Replacement (GAR) metric from Evolving Hockey. Pearson’s -3.4 GAR suggests he was actually well below replacement level this season, as a result of his lack of 5-on-5 offence and poor defensive performance, particularly on the penalty kill, which we’ll get to later. Again, some of that can be explained by his PDO, but it’s still a concern. He’s had much better seasons in the past by GAR, so perhaps this is an outlier rather than a sign of what’s to come for Pearson in the future.

We can also look at Pearson’s performance with HockeyViz’s isolated impact shot maps. These adjust for context like quality of teammates and competition, zone starts, and other factors. 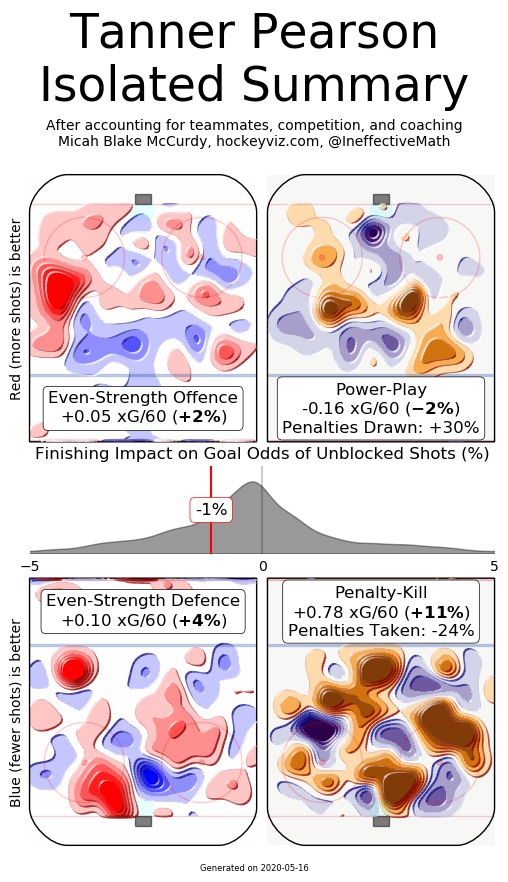 From this, we can see that Pearson’s overall impact offensively was above average, if a little heavy on shots from distance on the left wing. Defensively, he was a little below average, with a lot of shot volume coming from his side of the ice. That’s not ideal, particularly from a player counted on in a matchup role.

Remember, this shot map takes into account Pearson’s usage, so the below-average defensive results can’t be explained away by facing tough competition.

His overall impact — excluding special teams, which is coming in a bit — is a little below NHL average.

Taking all this into account, Pearson gets a very average grade in Science: C.

Social Studies (Leadership and Intangibles): B+

You’ll never hear a complaint from or about Tanner Pearson. Green’s reliance on Pearson to play in every situation and particularly to defend one-goal leads late in regulation speaks volumes about the trust he places in the veteran winger.

Pearson’s consistency in his effort sets an example on the ice and he’s a cheerful presence off the ice, quick with a smile and a word of encouragement to younger players. He’s a well-liked player in the locker room.

While Pearson isn’t an official part of the Canucks’ leadership group and isn’t as vocal as some of his other teammates, he’s still a veteran voice with a Stanley Cup ring to back up his words.

Pearson is a reliable quote for the media, regularly willing to step up after a disappointing loss when other players might make a run for the showers before the cameras arrive. Is he among the best quotes in the room? No, but he never shies away from speaking his mind.

On social media, Pearson mainly connects with fans on Instagram rather than his seldom-used Twitter account. That includes shots of his much-beloved german shepherd Emma, as well as adorable baby photos and videos of his son, Tucker. Pearson gets some serious bonus points for these baby giggles.

A solid performance in Language Arts for Pearson. He’s not top of the class, but he’s holding his own.

Pearson is an elite athlete playing in the NHL.

Here’s where things get a little dicier for Pearson. While he’s used in every situation, it seems like he probably shouldn’t.

In terms of scoring rate, Pearson looks even better. His 5.47 points per 60 minutes is good for 53rd among the 242 NHL forwards with at least 60 minutes on the power play this past season. That puts him solidly in the top quarter of the league when it comes to scoring efficiency with the man advantage.

The underlying statistics suggest Pearson doesn’t drive play on the power play — Adam Gaudette moved the needle the most on the second unit — but he still got chances from dangerous areas and put up points.

Where Pearson’s special teams get a lot uglier is on the penalty kill. Pearson was a regular on the penalty kill, particularly when players like Tyler Motte or Loui Eriksson were out of the lineup. He averaged just over a minute per game shorthanded.

His shot map from HockeyViz shared above tells part of the tale: shot attempts were 11% more dangerous than average when Pearson was on the ice killing penalties. In case it isn’t obvious, that’s very much not what you want.

That’s reflected in other underlying numbers. Pearson was on the ice for the highest rate of unblocked shot attempts against while shorthanded on the Canucks and the 12th highest among regular penalty killers in the entire NHL. Canucks’ goaltenders were peppered with shots when Pearson was killing penalties.

As a result, Pearson was on the ice for the highest rate of power play goals against among Canucks forwards.

The truth is that Pearson probably shouldn’t be on the penalty kill. It’s never been a significant strength of his game. The problem is the Canucks just didn’t have anyone else to fill in on the penalty kill when other regulars were injured or in the box.

Pearson’s power play contributions keep him from a failing grade here, but next season maybe he’ll take some different Electives.

Pearson’s grades are all over the map, but his Science and Electives grades drag what would be a solid B+ down to a B-. That’s still a decent grade for a second-line forward, a role in which he was reliable all season long.

A little less usage on the penalty kill and a little more luck at 5-on-5 and Pearson could be even better next season.